We talk to Alison Yeates about her experience featuring on Kirstie's Handmade Christmas, sharing her love of parchment craft!

Long-standing parchment crafter turned teacher and contributor Alison Yeates has created hundreds of parchment projects over the past years having contributed to the very first edition of Parchment Craft magazine.

And in November/December 2020, she featured on Channel 4's Kirstie's Handmade Christmas! Find out how this opportunity came about and what it was like taking part in the popular show we all know and love.

How did you come to work on Kirstie's Handmade Christmas?

I have seen previous year’s episodes of ‘Kirstie’s handmade Christmas’ and had often thought ‘I could do that’. Back in August I saw a post on Facebook asking for crafter’s to apply. I thought I'd have a go. I sent in the application form with a few pictures and a short video of my thoughts for a project. I received a few phone calls from the production team over the next couple of weeks, and eventually I heard that I'd been selected to take part in the paper craft section.

I was very excited at this news. I then had to start to prepare what I was going to make in three hours – three hours isn’t that long when you're doing parchment craft! I timed myself carefully, trying to allow time for speaking to the cameras and to Kirstie. I had to cut a few corners to get it done in time, but I just wanted to showcase the traditional look of parchment craft as there are still a lot of people who have never heard of it.

What was it like filming the show? What was the best bit?

When the day came for filming, I went to the location and was met by some of the very friendly and helpful production team. Because of Covid restrictions we had various rules to follow, etc. and the actual competition was held in a marquee with no walls! It had been decorated beautifully for Christmas and the hedges outside had lots of lights on them. We had to do a piece of filming walking towards the marquee and then an interview to camera talking about what we were going to create. I was quite nervous, but the camera team put you at ease.

We then went to the marquee to start the competition and we met Kirstie, who was lovely. We sat at our tables, and to keep the cold at bay, we were provided with fan heaters and hot water bottles – so thoughtful. There were three other competitors – one doing paper cutting, one doing quilling and one doing large origami. 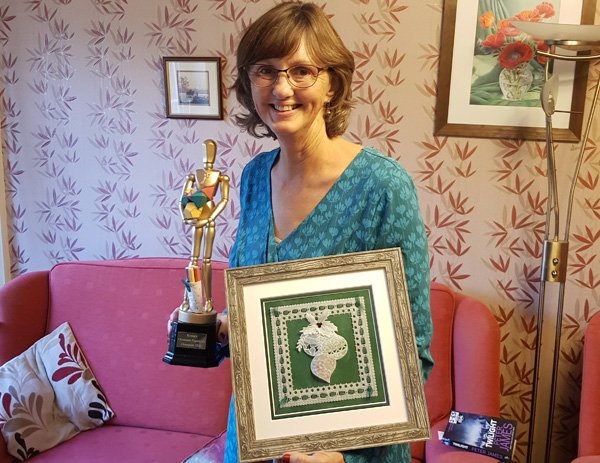 Once the competition had started I set to work with the grid to produce the border first. I couldn’t believe how fast three hours went. I was really rushing at the end and would ideally like to have re-embossed some parts but time just disappeared.

It was great to talk to Kirstie and introduce her to parchment craft – she seemed fascinated by the process.

After the competition had ended I was able to have quick look at what the other competitors had produced and there was a fabulous quilled Christmas cactus, a massive origami Christmas tree and a wonderful paper cut Christmas scene. We all found however, that the cold slightly damp atmosphere was not good for any sort of paper!

The judging then started. Our judge was Zack Mclaughlin who's an incredibly talented paper artist. After some time it was back into the marquee for the results – again all a bit different because of Covid, the award had been placed onto a table in the centre and the winner had to go and collect their own prize.

I was absolutely delighted to win, Zack said it was as it was so intricate.

What a fabulous day and experience, it was great to see how a television programme is made, I can only imagine that editing takes hours as there would be so much film to go through. 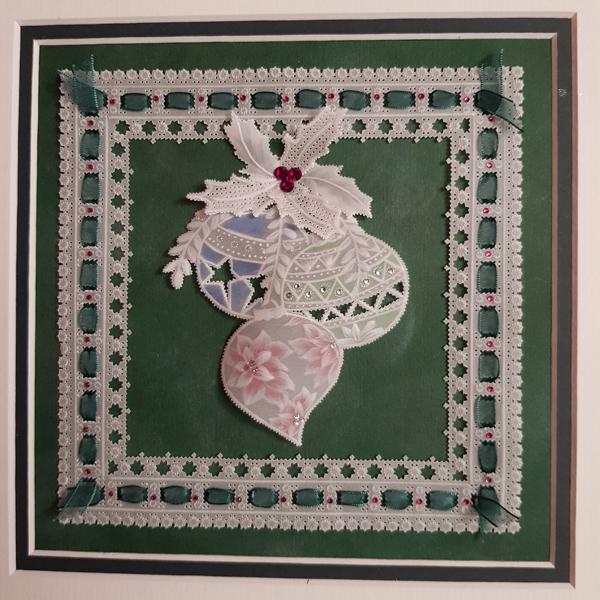 Do you think this will help increase those that partake in parchment craft?

I hope it may stir an interest in parchment craft so that others may start the craft and enjoy the calm and pleasure it brings.

Don't miss part one of our interview with Alison where you'll find out how she discovered her love for parchment craft, what inspires her and top tips for those new to the craft.