William Morris was a Victorian author, illustrator and businessman but today he is best known for his designs for the home. He fashioned patterns to be used for wallpaper, textiles and tiles and favoured patterns from nature with a medieval influence. One of the nineteenth century’s most influential designers, he pioneered the Arts and Crafts Movement which championed craftsmanship. His company Morris & Co. is still running today. Morris used simple forms of flowers and plants from his gardens as inspiration for his work and well-known patterns include Strawberry Thief, Compton, Wild Tulip and Honeysuckle. Compton (pictured) and Wild Tulip are just two of the William Morris wallpapers on sale at The Miniature Scene. These scale wallpapers are 1/12th versions of patterns from the Morris & Co. catalogue and measure approximately 28cm x 40cm. They would fit particularly well in Victorian, Arts and Crafts, countryside or modern interiors.
The Miniature Scene
Price: £1.57
www.miniaturescene.com

2. …for a touch of Neo-classicism Popular in the mid- to late Georgian period, Neo-classicism celebrated classical Roman and Greek influences in interior design. At the time it was referred to as ‘the true style’ and showcased symmetry, mythical figures, swags, vases and animals including lions and griffins. Furniture designer Robert Adam and potter Josiah Wedgwood were among the proponents of the style, which was thought of as the antidote to the earlier ostentations of Rococo and Baroque interiors. Now your Georgian abode can benefit from this classical style. To achieve the look that was fashionable at the time, this wallpaper can be applied above a dado rail and half wall panelling.  This miniature paper, which is called Gryffon, comes from Miniphile and is sold in packs of four sheets. Each sheet measures 42cm x 21cm or A3 size. It has period detailing including vases, swags, and of course, griffins. Miniphile stock a range of period papers and borders for miniature Georgian and Regency homes.
Miniphile
Price: £12.50 (for four sheets)
www.miniphile.com

3. …to install a feature wall

For a modern miniature home, a feature wall can turn a plain setting into a space with ‘wow’ factor. The feature wall creates a focal point within a room by using contrast. Three walls of a room are decorated in one way, for example painted, and the fourth is decorated in a contrasting way, for example with stone cladding, a different colour of paint or, in this case, with a patterned wallpaper. In large scale modern homes a feature wall is often used in rooms which lack a focal point such as a fireplace or used to highlight a prized piece of furniture. The same tricks can be used in 1/12th scale. Your miniature feature wall could provide a background for an ornate mirror, a modern bath tub or a hand-dressed bed. Damask wallpaper is ideal for creating a feature wall. This heavily patterned wallpaper can be used in modern or traditional interiors and is synonymous with glamour. As such it most often comes in jewel colours. This miniature damask paper from The Dolls House Emporium comes in varying designs and is available in pink and silver, black and gold, gold and cream, rose and metallic colours. It measures 43cm x 60cm per sheet.
The Dolls House Emporium
Price from: £2.60
www.dollshouse.com

Recreate an Egyptian temple, palace or tomb in 1/12th scale with this detailed paper from Jacksons Miniatures. It measures approximately 43cm x 30cm and is printed on a satin finish paper. In the true style of ancient Egyptian wall paintings, it features animals and people shown in profile view using the traditional colours of gold, black, red and green. It even includes hieroglyphic detailing. This paper could also be used in period settings. Egyptian décor was popular amongst Europeans during the Georgian period when Napoleon invaded Egypt, during the Victorian era when archaeological discoveries where being made and during the 1920s when Tutankhamen’s tomb was found.
Jacksons Miniatures
Price: £2.50
www.jacksonsminiatures.com 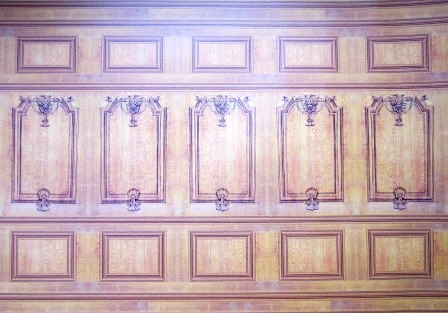 Looking for the perfect wall covering for a study, library, formal hall or billiard room? Look no further because the museum quality French Panel paper could be what you need. This highly detailed paper contains a central panelling section which mimics wood carved in the French style. Its details include rosette and leaf decorations and it is surrounded by two rows of panelling, all on a background of finely grained oak. It measures approximately 45cm x 30cm and can be used as full wall panelling or cut into section to create a half-panelled look for a room.
Dolls House Wallpaper
Price: £12.45 (pack of three sheets)
www.dollshousewallpaper.co.uk Tile murals are one of the oldest forms of wall decoration and now thanks to Horst and Rita Kruger, your miniature home can boast its very own exquisite, custom made tile wall art. Miniature tiles are made from natural clay and porcelain and then hand-painted with the chosen image. Designs include fruit baskets and animals and come in varying sizes. These bird murals are based on Victorian wall murals in Paris and have hints of Asian art in the styling. A tile mural would be at home in a period or modern kitchen or bathroom, as a style statement in a grand hallway or as a piece of art in its own right. Tiny Ceramics design and make each panel to customer requirements and also do shaped, plain and patterned tiling for floors and walls.
Tiny Ceramics Miniature Tiles
Price: See website
www.tiny-ceramics.com

High Victorian describes a style of architecture and home décor that was popular in the middle of Queen Victoria’s reign. It showcased everything that was over the top in design and often featured Gothic elements, heavily patterned and decorated surfaces and influences from Italy and the Far East. Scale paper specialists Dolls House Wallpaper have a range of more than 20 varieties of High Victorian wallpapers, including this Melrose pattern which has a stylised scroll border atop acanthus leaf pillars. Dolls House Wallpaper also carry a vast array of wall, floor and ceiling papers arranged by period.
Dolls House Wallpaper
Price: £7.50 (pack of three sheets)
www.dollshousewallpaper.co.uk

8. …to recreate a stately home in miniature Susan Bembridge Designs is the place to find exact scale copies of original period wallpapers from stately homes across the UK. There are six historic houses to choose from and each wallpaper has been reproduced with kind permission of the house’s owner. This particular paper has been recreated from the drawing room at Sutton Park, near York. The original wallpaper’s intricate pattern was hand-painted by 24 Chinese artists in 1756. The wallpaper is available in its original green colour way and also in powder blue, Chinese yellow, jade, oyster and black. It comes in four standard heights, including 1/12th and 1/24th scales, and variable widths and is also available as printed cotton and printed silk crêpe de chine.
Price from: £12
www.susanbembridgedesigns.co.uk

Whether you are creating a haven for little people of the fairy or child variety, the Fairies with Sweet Peas wallpaper would be the perfect addition to a magical-themed room, child’s bedroom, Victorian nursery or fairy castle. The paper is approximately 43cm x 30cm and is part of the nursery range from Jacksons Miniatures. They also have a blue Fairies wallpaper, which comes in two scales.
Jacksons Miniatures
Price from: £1.50
www.jacksonsminiatures.com Now that your 1/12th scale home is fully wallpapered and decorated, it’s time to turn your attention to your dolls house’s dolls house. Yes, even the 1/144th scale home, baby house or room box can be decorated with scaled wallpaper and tiling thanks to the miniaturists at Pear Tree Miniatures. They make sheets of wallpaper, tiling and rugs printed onto sticky-backed paper which can easily be applied inside the most bijoux of miniature rooms. Their range is specially made to complement the 1/144th scale buildings and furniture they make, but would equally suit any miniature of this size. Pear Tree also take on 1/144th scale commissions.
Pear Tree Miniatures
Price: 50p
www.peartree-miniatures.co.uk