A Brief History of The Sideboard Images
When I was growing up, the sideboard was a piece of furniture that was my mother’s pride and joy. Ours was lovingly given the Mr Sheen treatment every week to keep it gleaming. Its capacious interior was a great place for stashing junk and clutter! Then they fell from favour, but today’s fashion for retro furniture means that sideboards are making a come-back – not the heavy Victorian variety, with profusely carved decoration, but the sleek, teak mid-century Danish-influenced styles from makers such as G-Plan and McIntosh.

Sideboards first appeared in the 1770s in Britain, popularised by Scots architect and furniture designer Robert Adam. George Hepplewhite, the famous English cabinet-maker, illustrated a sideboard in his Cabinet Maker and Upholsterer’s Guide (published in 1788, two years after his death). The sideboard was equally popular in America.

Far from being a repository for family clutter, the early sideboard was a piece of furniture with a very clear purpose: to house dining accoutrements such as cutlery and glasses in its roomy cupboards and drawers. Some even contained a built-in wine cooler. The sideboard also provided a useful waist-height surface from which food could be both displayed buffet-style and served.

Georgian sideboards were elegant and slender, with delicate inlay and veneers, usually arranged on twin pedestals. Victorian sideboards were chunky, sturdy and substantial, often made of oak or mahogany. The heyday of the sideboard was the Victorian era, when the industrial revolution led to an explosion of the middle classes – people affluent enough to afford a separate room dedicated to dining. The sideboard was a must-have piece of furniture, on which were displayed cut glass lustres, silver candlesticks or polished brass oil lamps plus decanters, perhaps a silver salver, decorative soup tureen or punch bowl. 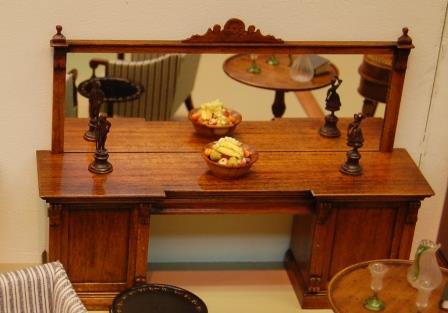 Miniature Sideboard by Taberna Miniatures
Miniaturists in search of a sideboard can take their pick. Mini Mundus do a Chippendale sideboard kit, while the Dolls’ House Emporium produces a choice of ready-made models, including a pretty white-painted French buffet and even a shaker-style sideboard. On eBay you might find a more unusual selection from private sellers, such as genuine scaled-down Art Deco versions or classic 1950s styles from vintage dolls’ houses. Why not create a vignette: a Victorian sideboard loaded with Christmas goodies ready for a feast, or a 1970s Danish sideboard with lava lamp and space-helmet portable television? Groovy baby!