Erin Summers takes us on a journey through the highs and lows of buiding her 1779 Georgian Dolls House mansion from a Dolls House Emporium kit. ...

In 2010 I bought Grosvenor Hall by Dolls House Emporium, ready to try my hand at the hobby I had always wanted to pursue but never had the confidence for. I wanted to make a dolls house, and not only one dolls house, I wanted to make dozens. My fears that miniature DIY would be beyond me had held me back for years, while I silently thought about all the different scenes and buildings I’d like to build. Finally, after a severe illness, I decided that I had wasted enough time thinking about what I’d like to do and now it was time to actually do it. Never one to do things by half and always prone to biting off more than I should, I bought one of the biggest houses on the market. Its classical style was perfect for me because I wanted my first project to be styled as accurately as possible to the year 1779.

I lost my inspiration

With the help of my husband and a family friend, I muddled my way through the build until all was complete except the hinging of the doors. And then disaster struck... I lost my inspiration. Looking at the rooms, I realised that what I had visualised creating wouldn’t fit inside Grosvenor Hall. I wanted a ballroom, a huge kitchen and several other non-standard size rooms. What I had was seventeen rooms of more or less the same boxed size. It didn’t make sense for a ballroom to have the same proportions as a maid’s bedroom, and this problem had me stumped.  I contemplated selling the house to buy another, but then I pulled my socks up. Who said I had to stick to the original Grosvenor layout? It was my house and I’d treat it just as I would my real house – knock a few walls out and change the layout to suit my needs. 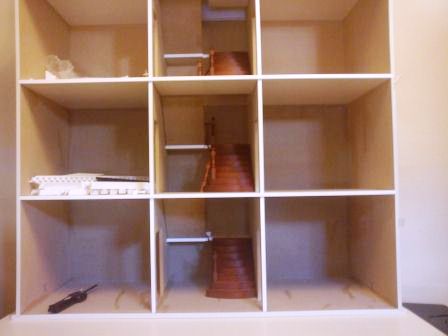 Firstly I had to remove the stairs I had prematurely installed in the four middle hall rooms. When I finally got over the commitment to the traditional layout including stairs the whole project opened up. I had in some places gained new rooms to design with the themes I wanted and in others the ability to make double width rooms, so it was a win-win situation. In traditional dolls house fashion I will be building in implied spaces to give the illusion that is there is more of the house beyond the slice that we are viewing.

Removing the stairs from the hall rooms meant that I had some ceiling holes to fill in. This I did by making a cardboard template of the empty space. After drawing around that onto a sheet of MDF I then had to cut the pieces out with a saw. The slightly rectangular piece I ended up with was a little on the big side, so it was sanded it down until it fit the gap. I propped my MDF cut-out up underneath with various household items, and then proceeded to fill in the gaps around it with a mixture of sawdust and PVA. I left it alone to dry overnight and the next day it was safe as houses; my 1/12 aristocrats could do the quadrille without the worry of the ceiling collapsing on them. I was finally able to begin wallpapering.

Once my new ceilings were secured I turned my attention to the first room I will be decorating on this build – my beautiful ballroom. I bought two plain six arm chandeliers because at approximately £50.00 each crystal chandeliers were over my budget, especially since I needed two for the double width ballroom. I got around this by using fishing wire to string the arms with a set of crystal faceted beads that I saved years ago from a broken vintage necklace. Tying the fishing wire off at the end proved to be a problem, as the large knot it left was unsightly. With a little experimentation I learned that by dropping a bit of superglue down the tiny hole in the last bead, it would run along the length of fishing wire and thereby glue each bead on securely on and eliminating the need for putting a knot on the end. I did lose the first layer of skin on most of my fingers from a generous coating of superglue but I considered this a fair price to pay for saving me about £100.00. 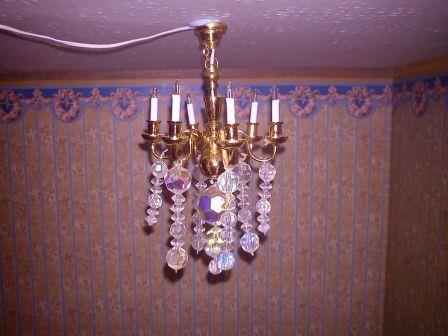 Top tip: Save your skin from superglue by rubbing some nail polish remover on the affected areas. To compensate for the now longer chandelier I used small pliers to remove most of the chain that it hangs by, bringing it up flush to where the ceiling rose will meet it.

Next time:  I make and fit the walnut parquet floor for the ballroom and show the new layout and room plan of Grosvenor Hall. In the meantime, I’ll be thinking of a new name for the house to reflect its unique personality. All suggestions welcome!