For the third part of this blog I won’t be covering a specific room, but rather the overall layout of the now named Norman House. ...

For the third instalment of this blog I won’t be covering a specific room, but rather the overall layout of the now named Norman House.  Included are two hand drawn depictions of the house, with my abominable handwriting labelling each room’s function.  Where you see a dotted line indicates where I have removed a wall that once was.  The diagrams are fairly self-explanatory, although in the basement there is a dead space marked by an “X”.  I’d advise that if you want a perfectly accurate floor plan of Grosvenor Hall you contact DHE, they have always been extremely helpful for me during my long relationship with them as a customer.

I’ll begin my tour on the ground floor of the house.  Of course we’ve already seen the ballroom.  At the moment I’m working next door in the Games Room, which will host a billiards table, card playing tables, chess and so on.  That room will have a Chinoiserie theme and I’m trying to strike the right balance between drama and class – no new money in this Duchess’s mansion! 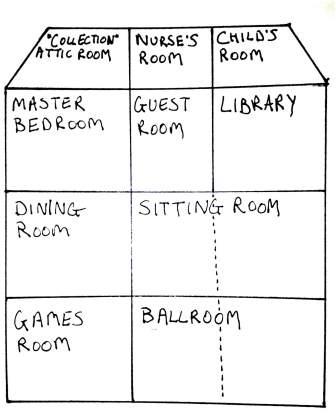 On the first floor, the Dining Room will be Jacobean.  Of course many Georgian houses had contemporary makeovers still holding interiors hinting of times in their own past, and I fully intend to incorporate that realism in my decor.  The dining room will be fully panelled and yes, you can look out for a suit of arms!  Next to that we have another double width room, called the Sitting Room but really doubling up as a Sitting/Music Room.  Being a great lover of music I’m unable to pass by all of the beautiful miniature musical instruments available today.  As far as accuracy goes, I presume plenty of teas and gossip were shared to the tinkling sounds of a family member playing on a harpsichord.  This sitting room has an impressive continuous landscape wallpaper waiting to be applied to it, of an early North American landscape; something I chose not only for its beauty but also because I originally hail from that country myself.  I’m really looking forward to the challenge of applying that paper and sharing it with everyone once it’s finished.

The second floor holds the Master bedroom, or as I prefer to call it, the Mistress bedroom.  After all it is my house!  But I bow to tradition.  I will be doing this room with a French touch in a palette of cool blues and gold as they are my two favourite colours.  Next door is the Guest Room, where I imagine having tête-à-têtes with a visiting best friend.  In that spirit I have a suspicion it may be rather pink…  The final room on the second floor is the Library.  I have a Biblioteque paper for the back wall, giving the illusion of a corridor and rooms beyond.  The other two walls will be covered with bookcases filled with real 1/12 scale books, which I greatly enjoy making.

The attic floor will have the “collections” room.  A family of this stature would have been on the Grand Tour, bringing home countless treasures, as well as having centuries full of relics there was simply no place for in a streamlined Georgian home.  This is where I intend to house those items of wonder.  Next door is the Nurse’s bedroom, and next to hers will be the young Master’s, my very own son’s.  No gloomy attic existence for him though, this Georgian mother was a fan of Rousseau!

Finally we come to the basement.  As you see by the dotted lines I have removed a wall to make a large kitchen appropriate for the times and I intend to kit it out as accurately as possible with all that was modern and traditional in 1779.  Next door is the Housekeeper and Butler’s bedroom, for yes, they are married.  Off the kitchen is a small corridor leading nowhere but adding to the illusion of spaces beyond what the viewer can see, such as stairs that might lead to the house.  Lastly we have a bedroom for the maid’s and footman each.  (You can be sure the Housekeeper keeps a sharp eye that there’s no back and forth between the two.)  Those two rooms will be sparsely but comfortably furnished.  A young kitchen boy will sleep in the footman’s room. 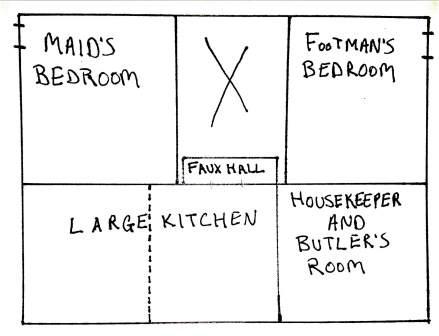 So that is the plan for the house!  I’m confident I can achieve it though I believe it will take a significant amount of time.  Whenever I begin to feel the project is simply too large for my lifetime I remember this saying, “How do you eat an elephant?” – “One bite at a time!”  Tune in next time to see how I managed with the Games Room.  And many thanks again for reading!

To go Back to Part 2

To go Forward to Part 4