A Fantasy World of Little People Join Deb Weissler as she explores the fantasy world of character dolls created by Silke Janas-Schloesser. ...

“I’ve spent more time with my little people than with my husband or son,” doll maker Silke Janas-Schloesser heartily laughs. “I am a doll person through and through. I love them all: the pretty, the ugly, the whimsical, the cuddly, big and small.” This past summer Silke celebrated her 20th anniversary as a doll maker and in her green room (one of three rooms that comprise her studio), she’s surrounded by two decades of beloved dolls she’s made and just couldn’t bear to part with, and so they have become her own private collection.

To see one of Silke’s dolls is like turning the pages of a beautifully illustrated fairytale book, filled with trolls and fairies, wizards and witches, goblins and gnomes, and a host of other fantastical characters. As a child living in a small village in the western forest of Germany, Silke grew up listening to the tales and legends of her homeland and these have helped guide her throughout her life.

As an internationally acclaimed doll maker with a seemingly inexhaustible imagination, this self-taught artist has received accolades from around the world, winning coveted awards for her OOAK hand-sculpted dolls. Best known for her larger characters, Silke considers herself a neophyte to the world of miniature dolls. 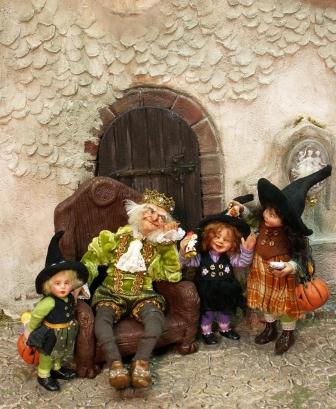 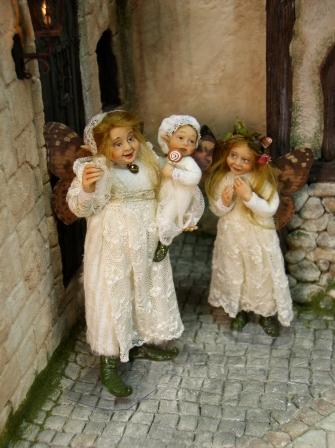 Where it all began

She discovered miniatures quite by accident while taking a workshop in 2009, building a ‘Crooked House’ structure taught by Paperclay© wizard Rik Pierce of Frogmorton Studios. It was clear from the start that Silke’s dolls would never fit inside Rik’s whimsical and quirky 1/12 scale cottage. Thus began a new adventure into the realm of little people.

This was not Silke’s first foray making wee ones. Decades before, her Uncle Norbert spied her hand-sculpted little trolls and pestered her to sell him one. He gave the troll to his wife as a gift and it wasn’t long before her Aunt wanted a tiny wife for the lonely troll. Her venture into wee ones had begun, but it took Rik’s class to catapult her in this new business direction. 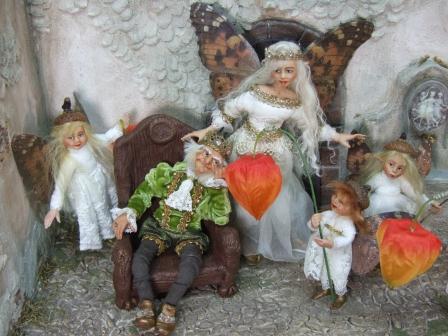 At the 2011 Philadelphia Miniaturia, while many doll artists grumbled it was an off-year for doll sales, Silke’s delightful fantasy characters rapidly disappeared off her sales table. A quarter of her customers buy dolls with a specific project in mind. The rest buy a doll they just can’t resist and then go home to plan a vignette around it. Her miniature dolls have found homes in tree stumps, toadstools, wooden wine boxes, gingerbread houses, watch cases and fairytale cottages. 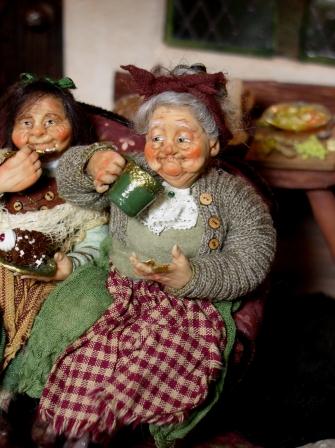 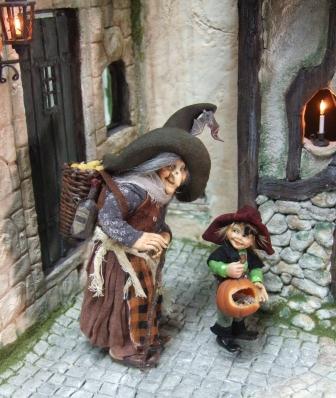 Over the years Silke has poured through more than 5000 books, from fairy tales to anatomy, costuming to fine art, collecting an impressive portfolio of features, expressions and gestures, thus ensuring each doll is truly unique.

“I sculpt some special faces several times, but each has its own unique twist. I especially love noses and wrinkles. I like eyes, mouths, eyebrows, a double chin,” she laughingly admits.

Her skill as a former illustrator and makeup and airbrush artist are all evident in her polymer clay sculpts. Beginning with the face, hands and feet, Silke lets each doll tell her what they are to become. Each face is a roadmap, taking her on a personal journey through the land of make believe. If a head doesn’t work out it goes into the trash bin and she begins another. For Silke the face and hands speak volumes about the doll’s personality. Once satisfied with ‘the look’, she creates a wire armature surrounded by a soft body, posing and re-posing until she’s satisfied. 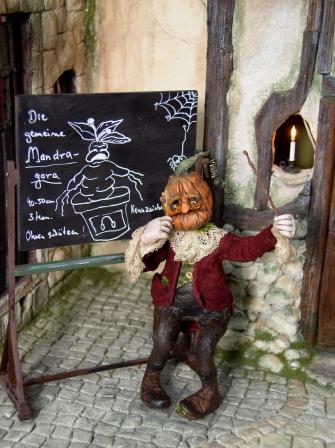 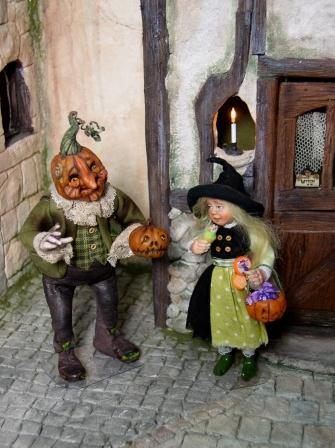 Silke’s hand-sewn costuming is second to none, preferring to work with natural fibres like silk, velvet, linen and fine cotton that drape beautifully. In her tiny ‘witch kitchen’ she dyes her own fabrics and wigs. “I’m always on the hunt for materials everywhere I go,” says Silke and her workshop holds an impressive array of fabrics she’s collected from all over the world.

In the wee hours of the morning Silke steals down to her workshop, a series of three rooms in her home. The pink room is her fabrication studio filled with clay, paints, fabric, hair, and glue; everything needed to create her dolls. The green room holds not only her personal collection but those dolls that are completed and destined for their new homes. The third room, painted a soothing cream, is her office where she posts dolls on online auction sites, maintains her web site, and chats with others via her blog.

While she works, she listens to audio books. “Harry Potter for the seventieth time, or children’s stories, fantasy and mystery tales,” Silke explains, all of them rich fodder for her imagination that eventually translates into her creations.

Once she’s finished a number of dolls she sets up her photography equipment, often using those romantic and fairytale structures she made in Rik’s workshops as backdrops. She loves purchasing furniture, tableware, pets, “everything witchy or Christmas” from other artists to enhance her mini vignettes, thereby ensuring collectors who buy online can fully appreciate the tale she is spinning. Although she accepts commissions, Silke abhors a ‘lazy narrator’. Customers who just can’t seem to express what they see in their heads well enough so that Silke can picture the outcome. If this happens she will decline the commission. She also makes it clear she does not do period dolls like Victorian or Georgian, or naked dolls.

“There are enough other good artists out there who can do that very well,” Silke admits, preferring instead to let her rich imagination run free. “I have eyes and ears everywhere and I love a good story.”

When not doll making she loves sitting in her living room, feet up, her nose in a good book and her cat curled up in her lap. Who knows, the next read may just inspire another little person. And all she wishes for is that her little people find good homes and that her hands and eyes enable her to keep doll making as she gets older.

“One of my friends had to stop doll making because of her hands. That would be a disaster for me!” she exclaims. And collectors everywhere agree. 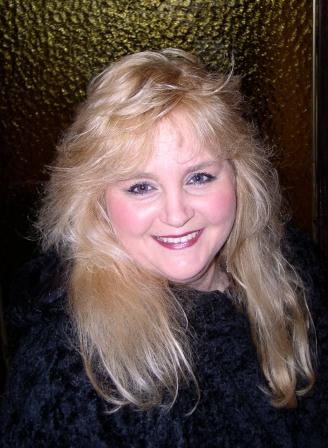 Silke’s miniature dolls can be seen at miniature shows in both Germany and the US, on her online shop on ETSY and via Swan House Miniatures.