Board Games - Make a Miniature Dolls House Chess or Draughts Board Board Games - Make a Miniature Dolls House Chess or Draughts Board

Jane Harrop continues her series of games, looking this time at board games and in particular Chess and Draughts. ...

A History of Board Games

The playing of board games dates back to ancient times when games boards would have been simply marked out on the ground or on bricks. The earliest board games were most probably games of chance, with player’s just needing luck. However, board games requiring participants to use strategy during play were just a step behind.

One of the most distinguished, and also the oldest surviving, strategic board game is Chess, invented in India around AD600. Early pieces representing military were carved out of stone or bone into the shapes of cavalry, infantry, elephants and chariots. There were countless variations of the game as it spread around the world, and after many changes, it eventually evolved into the modern game of Chess we know today. There has been a certain amount of snobbery surrounding the game, before the beginning of the twentieth century it was a game only really enjoyed by the affluent middle and upper classes.

Another well known and popular strategic board game is Draughts which is thought to date back to ancient Egypt. Rather like Chess, the game has developed over the centuries, although the beginnings of the modern game of draughts began in Spain during the sixteenth century.

Another board game with a long history is Ludo. The forerunner of the game is Pachisi which dates back to the sixth century in India and records show it was played by the Emperor Akbar in the late sixteenth century. A variation of the game, Ludo, was patented in England at the end of the nineteenth century.

The game of ‘Goose’ which originated in Italy in the late sixteenth century is regarded as the forerunner of the traditional race board game we know today, the most well-known of course, being ‘Snakes and Ladders’. Competitors of the game of Goose were rewarded or penalised for landing on certain marked squares and the winner of the game relied purely on chance. The game quickly spread across Europe and remained popular until the beginning of the twentieth century.

During the eighteenth and nineteenth centuries, Germany was the centre of the toy and games making industry. As the popularity of board games spread, publishers of maps and books in this country began producing board games as a side line. The three R’s, geography, history, science and morals were all popular subjects for board games at that time.

Industrial development during the beginning of the twentieth century saw a boom in the production of affordable board games and specialist toy and games making firms, like Waddingtons and Spears, were making board games purely for the entertainment of children. Many games were focused around events and changes in the world, like air and road transport. The middle-class Edwardians spent more leisure time with their children and board games provided hours of entertainment. The availability of themed board games grew as the century progressed, particularly well-liked were literary characters like Noddy, Winnie the Pooh and Peter Rabbit. The advent of television during the 1950’s provided the catalyst for yet more contemporary focussed board games.

Board games incorporating chance and strategy will always be popular and perhaps the most well-known household board game is Monopoly, patented in America in 1933. Another board game providing hours of fun is Scrabble, conceived during the late 1940s along with Cluedo, another firm family favourite.


Carefully glue edges of the inlay strips and position next to each other, alternating the wood types.


Once dry, use a sharp craft knife and steel ruler to cut out eight 1/8” (3mm) wide strips. 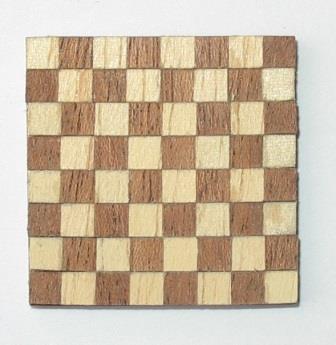 Lay and glue the strips on top of the base, twisting to alternate as you do so to create the chequered effect.

Take the frame pieces and position on their narrow edge. Mitre each end to an angle of 45 degrees using a mitre block and saw. 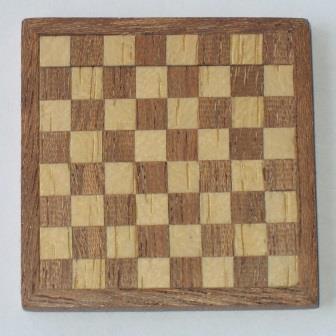 Position and glue the frame pieces around the edge of the board. Once dry use fine grade sandpaper to smooth all sides and edges. The board can be sealed and finished using either beeswax polish, varnish or oiled following the manufacturer’s instructions. 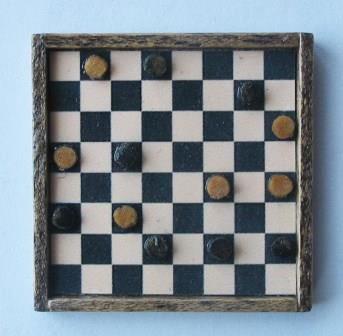 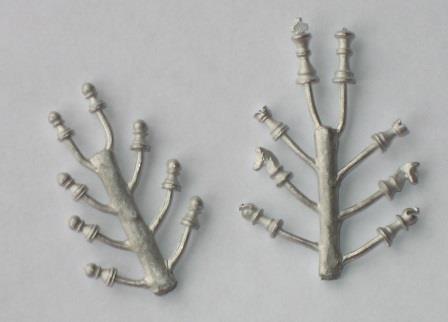 Tiny intricately cut Chess pieces can be bought in white metal from Phoenix Model Developments. The pieces are presented attached to a branch to make them easy to prime and paint. 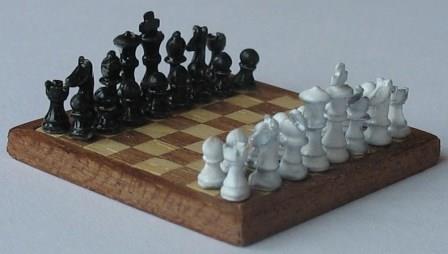 Once painted and dry, the Chess pieces are easily removed from the branch and the bases just need to be smoothed on a fine grade emery paper before gluing into position on the board.

© Jane Harrop 2013
All printed games boards and boxes illustrated are made by Shepherd Miniatures.