Jane Harrop shows us how to make our own miniature folding card table for the dolls house. ...

The playing of card games originated in ancient China and was eventually introduced to Europe during the fourteenth century. Early playing cards were often elaborately hand painted and gilded, and would only have been afforded by the very wealthy. Previously cards would have been used for fortune telling or religious purposes. Card playing for gambling dates back to the late fourteenth century and for many years some types of gambling card games were played illicitly as they were illegal in many countries.

When an innovative method of printing was developed in Germany during the early fifteenth century playing cards began to be mass produced and the popularity of card games soon spread as they became more affordable. Early packs contained seventy-eight cards and the suits represented four social groups, cups for the clergy, swords for knights, coins for merchants and staves for peasants. Eventually in France the suits developed to hearts, diamonds, spades and clubs and the number of cards within a pack reduced to fifty-two which became approved and accepted by other countries.

Early on card games were only played by adults but during the second half of the eighteenth century they were produced specifically to entertain, amuse and educate children. Probably one of the most popular children’s card games is ‘happy families’ invented by John Jacques in 1860. He also devised ‘snap’ another classic children’s card game in 1866. These card games, along with many others would have been particularly popular with Victorian children. During the twentieth century, whilst the playing of cards amongst the younger generation has remained well liked, the development and availability of other types of toys and games has meant that the popularity of card games has dwindled.

As with most games, card playing can either be straightforward and over in five minutes, or complicated and go on for hours. Some card games rely purely on chance, whilst some just require skill, and some both chance and skill.
There are many variations of card games played with a traditional deck of cards, but they are often categorised into the following groups:

Trick games – played with each player taking a turn and the cards being won by the person playing the highest card or trump. ‘Piquet’ is one of the oldest trick card games, but perhaps the most popular is whist.
Non-trick games – points are scored by forming a certain combination/run of cards. Cribbage, gin rummy and canasta are perhaps the most well-known.
Gambling games – like blackjack or poker which can be played in formal surroundings like casinos or games like pontoon that can be enjoyed in the comfort of your own home.
Patience games - played by one person. There are hundreds of different patience games.

Card playing was a very popular pastime for adults during the late Victorian and Edwardian eras and small square folding tables for the purpose of playing cards were mass produced and sold in large quantities to the middle classes.

Use a drill with a fine drill bit to drill a hole through the wood pieces at each marked position.

Use fine grade sandpaper to round the ends of each of the legs.

Take a dowel short leg support and use the same drill bit to drill a hole centrally through the wood at each end, approximately 1/4" (6mm) deep. Repeat the procedure with all remaining dowel pieces.
Stain all the wood pieces. Then buff each piece to a sheen with a piece of clean paper towel. 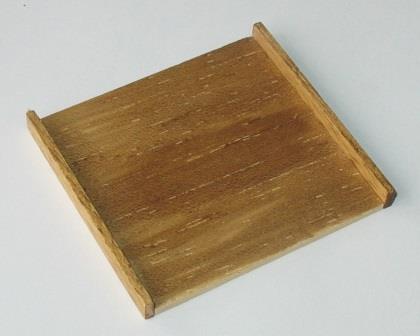 Stand the short table top supports on their long narrow edge and glue opposite each other to the outside edges of the table top. 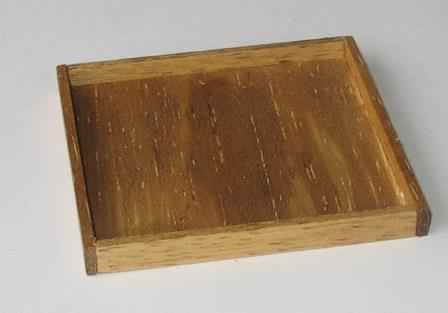 Repeat the procedure with the long table top supports. All bottom edges are flush. 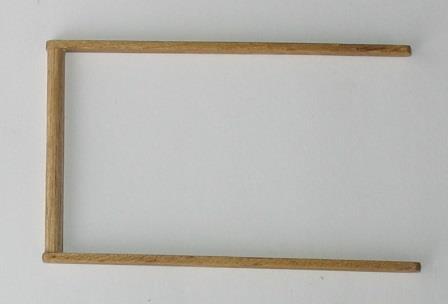 Position and glue the top of a leg (drill hole end) beside each end of a short leg support. Insert a brass pin into the drill hole at the top of the leg, through into the dowel. Repeat the procedure at the opposite side. 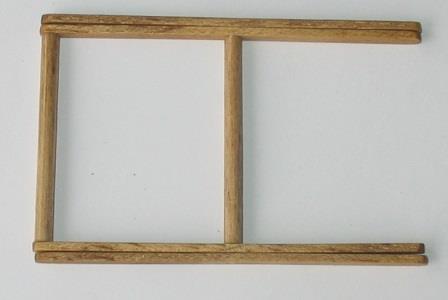 Take the remaining short leg support and place between the leg construction, in-line with the holes half way down the legs. Position the remaining legs, one on each side of the construction, so that the central drill holes are in-line with each other. Take a pin and thread through the two legs and into the dowel, dabbing a tiny amount of glue to the end of the pin before inserting into the dowel. Repeat the procedure on the opposite side. 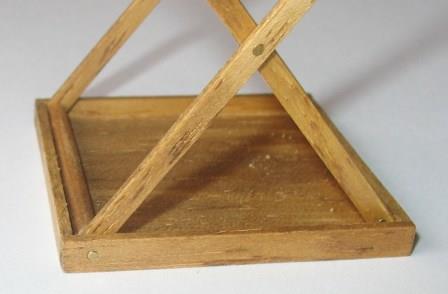 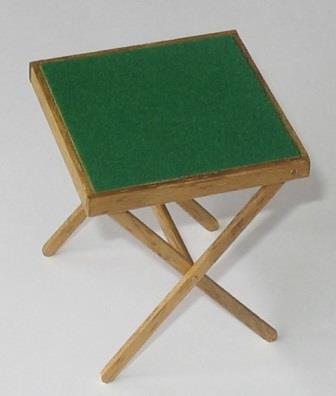 Position and glue the green baize/felt on to the top of the table. Whilst the card table is not being used it can be folded flat and leant against a wall.

Accessorise your card table with miniature playing cards, and perhaps an ashtray, glass of whiskey, or a cup of coffee for the players too!

For more great features and projects get the latest issue, or subscribe and save money at the same time.