Clap your hands if you believe in faeries Clap your hands if you believe in faeries

Marilyn Ormson takes us into the faery world of The Enchanted Woodland Faery Dollhouse Company and the work of Melissa Chaple ...

Clap your hands if you believe in faeries Images

I had seen Melissa Chaple’s faery houses at a couple of shows but hadn’t taken a close look at them. I’m more into historical miniatures rather than fantasy. What actually drew me to them at the Sarasota show, earlier this year, is a mystery in itself. However, once seen, these creations weave a magic around your aesthetic soul and are never to be forgotten.

Dr Chaple is American and lives in Florida but she was at Balliol College, Oxford (UK) in 1979; the first year Balliol accepted women students. She was a graduate student in Empire and Commonwealth Studies in the Modern History Faculty and a Frere Exhibitioner and Beit Senior Research Scholar. This is something of an impressive biography for a lady creating magical mini properties but, by her own admission, as a Balliol Old Girl she is ‘expected to be a bit tweedy and someone who keeps cats and plays with pixies in the garden’.

Whilst at Baliol she took on the task of heading The Enchanted Woodland Faery Dollhouse Company, continuing the work of the company's founder, Clare Maddingly, whose lifelong passion was to track down the existence of faeries and document their houses. This story is described in detail at the Company's webpage and makes interesting reading.

Right now I need a sprinkling of faery dust to help me with the problem of where to start. I have been struggling with a lot of photographs, trying to work out how to select just half a dozen or so to share here. The intense and finely detailed work in these houses begs you to look at every inch of them. 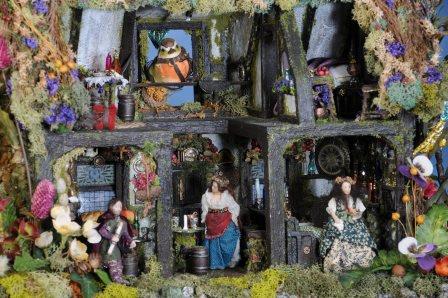 The houses are hand cut from 1/4” high grade plywood; all components of the house are handmade by the artist. All fabrics are frail silks and delicate soft cottons. The furniture and accessories are hand crafted with half-timbered and half-rock walls. Fireplaces are rock with faux finish. The roofs are heavily thatched with authentic corn straw bundles and the whole assemblage is embellished with natural mosses and a variety of dried and silk flowers collected from all over the world. A faery family of hand dressed faeries can be included and the whole project usually takes about 16 weeks.

How wonderful it would be to join the growing band of owners of an Enchanted Woodland Faery Dolls House. 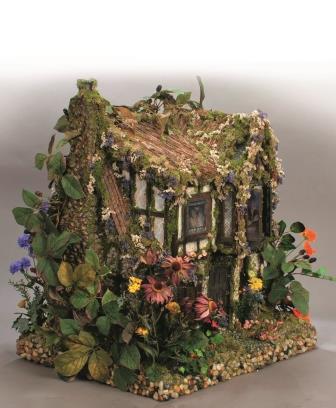 Poppy’s Cottage, created in 2009, came about because of a meeting between a colleague of Melissa Chaple and a visiting American artist, which led Melissa to Penelope Fielding's letters to her sister, Delphinia Warne. The letters described finding a faery house in the grounds of Great Dixter and had been found by the curator of The Great American Dollhouse Museum in Kentucky.

Here’s a tiny snip of one of Penelope’s letters: “The Faery House, Delphine! We found it! How lovely and how perfect! Its small roof is dormered and looks much like the Manor, but with thatch which is strewn with vines and purple flowers. There’s a spiral staircase of vines and twigs and fireplaces of small river rock. And books! Tiny books no bigger than an inch. And a tiny desk, where someone has been writing and drawing - amazing. Water flows from sea shells into shell basins, and there is a nursery for a baby faery - all pink with rose buds, and tiny toys carved from wood! It’s a delight, I cannot describe.”

Poppy's Cottage is now housed on a craggy cliff in the Fantasy Forest of The Great American Dollhouse Museum in Danville, Kentucky. Lori Kagan-Moore, its curator, says: ‘Poppy's Cottage is one of the favourite exhibits among our visitors. It’s complimented and adored daily. We continue to be delighted with it day after day. Melissa Chaple is a very gifted artist.’

The main photo is of Lovell Manor. The Research Team of The Enchanted Faery Dollhouse Company unearthed a diary written in 1917 by Elizabeth Cordelia Bates which chronicled the discovery of the Manor House at Minster Lovell. Although the actual location of The Manor, hidden on the banks of the Windrush river, remains hidden, Melissa has replicated the house from the descriptions and drawings found in Miss Bates' diary and Lovell Manor was completed in 2008. 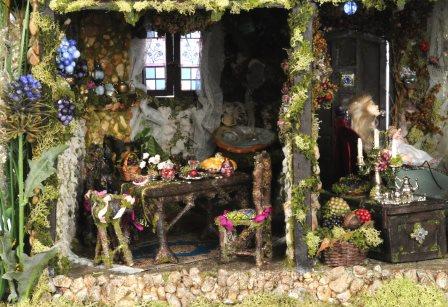 Here’s a taster from Elizabeth’s journal: “The Lady Faery touched my arm, smiled and pointed to the side of the house… I crawled around to the side of the house and peered into what looked like a tiny kitchen. It was wondrous - water flowed from a sea shell on the wall into a tiny basin of shell. Silver plate was on the wall with tiny goblets - Auntie Clare's gifts from ages ago. She led me on - she inside, me looking in through the windows. A small ground bird bustled from beneath its hiding spot under the kitchen window. At the back of the house I gazed in at stone floors and wooden chairs draped in dark velvets and saw a wooden staircase disappearing up a passage. She danced up the stairs and appeared at the upstairs window flinging it open for me to gaze into a beautiful room sparkling with silks like the night and the room was full of crystals and firelight. She showed me her tiny dressing table with bottles and jewels and brushed her hair in front of a tiny mirror.”

The Manor was sold into the Weinberger Private Collection in 2008. 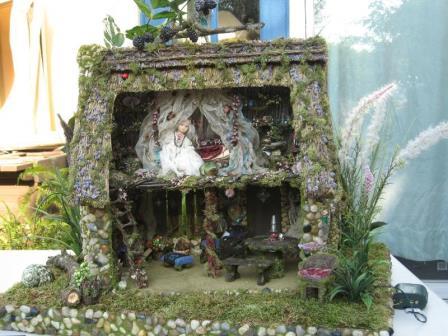 A faery house was discovered in a secluded corner of Port Meadow in Oxford in the spring of 1916 by Graeme Hirst, a third year Balliol man. It seems there may have been some notoriety surrounding Graeme’s ongoing searches for the faery house which may have led to him emigrating to the United States under an assumed name.

This connection was made when his great-grandson, Joseph Kelly listed the diary and other personal effects on eBay. Here is a small part of those notes: “…and we walked until we came to a stone cottage. Vines covered the thatch and pale light shone out from the wooden shutters and the open door. Small flowers and mosses lined the walls and hung from the oak beams overhead. Soft curtains billowed in at the open windows, a carved chair in front of the fires, a flower wrapped ladder led upstairs. Huge acorns were in baskets and berries the sizes of footballs, stored by a larder full of crocks and baskets……There was a fireplace of stone and the walls were fitted with tiny shelves holding glittering jewel-like bottles. The air was of earth and moss and a fire danced on the hearth. Jewels sparkled on a small dressing table and water flowed from a giant sea shell into a shell basin.” 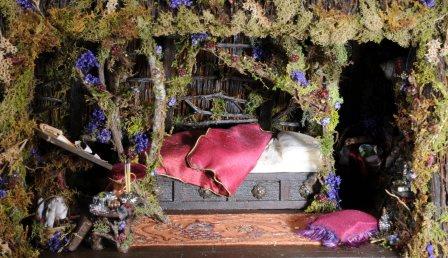 I challenge anyone to see these houses and not be fascinated by their intricate detail and sheer beauty. It’s difficult to choose a favourite, but this is mine… The sumptuous colours and richness of fabrics draw you into a seductive world. In 1916 Frank Summers, his mother and sisters lived in the tiny village of Woolstone, Oxfordshire. One night in May Frank disappeared from his home. When he reappeared at the end of that summer he told his family he had gone off with gypsies. Many years later, Sir Francis Summers, veterinary surgeon, told his niece a fantastic story of that summer in 1916. A summer spent, not with gypsies, but with the Woolstone faeries. Finally in the summer of 1983 the elderly Frank Summers disappeared again, without trace.

From the details Frank provided to his niece and the journal he wrote in the summer of 1921 about his meeting with Oen, Melissa was able to recreate Oen's Refuge. The description of the refuge is scattered through the story but I’ve selected some nuggets…“We came to a sparkling stream of crystal water and crossed a mossy arched stone bridge spanning a gurgling stream that flowed alongside a snug thatched cottage. A striped cat with wings sat on the kitchen window ledge watching us… We entered a snug room smelling of earth and forest… We ate pudding from sea shells with delicate spoons of finely wrought faery silver. Exotic jewels on the many shelves glowed in the reflected firelight.”

If you should want one The Enchanted Woodland Faery Dollhouse Company can create a faery house just for you.