In this part of the amazing dolls house that is Featherstone Hall Hotel, Julie finishes the Toile Room and shows you how a little 'surgery' will make the dolls sit properly in their beds and on chairs...

To fill the dead area behind the open door, Julie placed a tall chest of drawers with a jug and bowl on top for washing. This detail helps to emphasise the change in class levels on each floor. As mentioned earlier in the series, the facilities for guests, as well as the level of decoration, decreased the higher up the house you went.

Extra luggage was placed between the chest and the open door, and the bedside tables have been positioned either side of the bed.

Once the dressing table was in place, the lights were installed. Again, there is a subtle change from the expensive suites below, which have ceiling light fittings and lamps. In this room there are two wall-mounted lamps above the bedside tables and a tall lamp on the dressing table.

For the bedside lamps, a hole was drilled through the false back wall, the wires were pushed through, and the plugs were re-attached from the access hatch cut in the back wall of the house.

As the skirting boards had already been added, the dressing table lamp wires could not be tucked behind them, so a cable was added along the floor/skirting and through another hole in the back wall.

With the furniture in place and a carpet spray glued to the floor, Julie turned her attention to the bed. Although this room represents the hotel's less affluent clientele, Julie still wanted it to be as interesting as the larger suites below. Julie decided to take her previous idea of a man lying on the bed from the Duke's Suite one step further, and have a man actually in bed. A man asleep would be too boring so sitting up reading seemed a much better idea. Julie dressed the bed, making folded strips of sheet fabric of valances, covering the mattress top half in the same fabric and making two pillows.

The ready-made doll was stripped down, removing the tie and opening the shirt slightly. The collar was glued down to make it look more like a nightshirt. 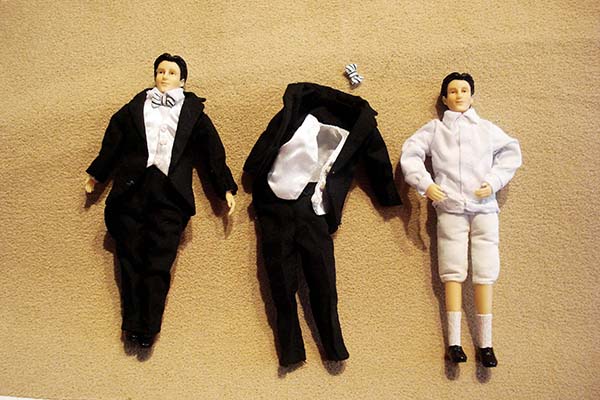 Bending the soft bodied doll into a 90-degree sitting position with his legs out flat in front of him, but to keep him in this position, Julie used a scalpel to cut away his bottom at the joint with his legs. Drastic surgery done, he was glued into position nestled between the two pillows. 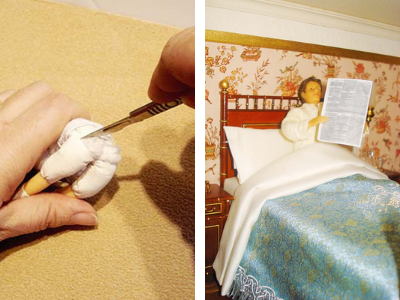 Fascinated by the world of miniatures? Dive into Dolls House & Miniature Scene magazine packed with inspiration from across the eras, step-by-step projects, seasonal ideas, the latest news, techniques and so much more! Explore the print and digital subscription offers today. 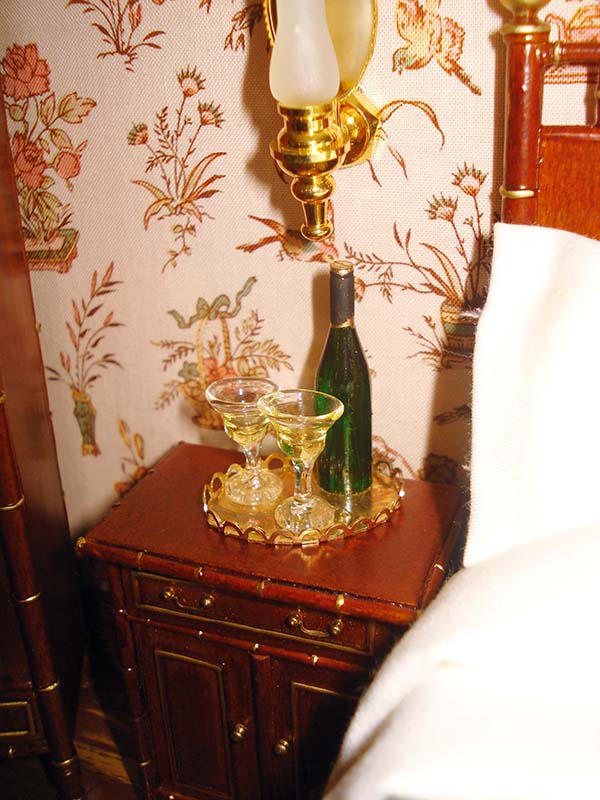 A quilt was made from a rectangle of pale blue silk brocade, finished with a turned under hem at the foot end of the bed. Strips of fringed braid were added along the floor edges of the quilt. Along the top edge Julie glued on a turned under strip of sheet fabric. When ready, the back was glued and wrapped over the doll in the bed tucking him in as the glued quilt was applied. Once done, the newspaper was positioned in his hands. The bedside tables were furnished with a jug and water glass on one and a tray from last night’s champagne on the other. 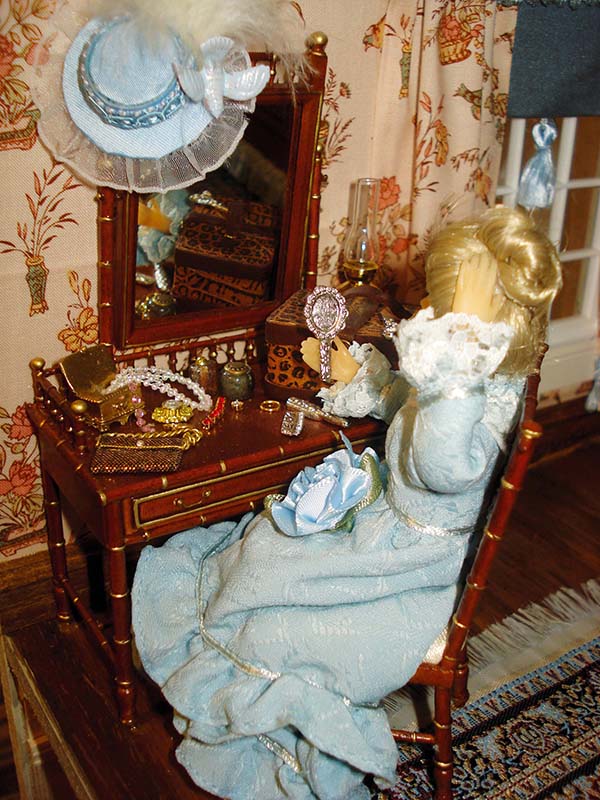 The dressing table is simply dressed to reflect the fact that it is not a home one with the cosmetics and toiletries in a leather vanity case. A pair of cologne bottles made from beads are on the table with a small jewel box, jewellery, a brush, comb and scissors. Chloe sits at the matching chair and just as Julie did for her husband, she cut away her bottom to make her sit and glued her in position. The final touch was a mirror in her hand, through which she can see her father standing at the doorway behind her.

Go back to part 13 where Julie begins to design the Toile Room, or to continue your Featherstone Hall Hotel journey, move to part 15 where Julie works on the Lemon Room.