In the penultimate part of this 2 year long series, Julie Jackson sets the tone in the kitchen as she brings it all together. ...

Although the kitchen was the fourth room to be completed, it was the first to really give me some scope to go to town on the dressing. It was the first of the important rooms in the Hall and so set the tone for those to come. I wanted it to feel bright and cheerful, have a touch of humour, but still look like a place of work. Most importantly I wanted it to reflect my own ‘miniatures’ style, and to reflect the story I had created.

In the grand tour in the 200th issue of Dolls House and Miniature Scene, we find in the lower hall, Fredrick is talking to Anna the maid, she stands in the kitchen doorway having a chat, whilst cook Mavis Gathercole and Chef Dupree discuss preparations for the special dinner tomorrow.

Kitting out the kitchen

These few lines helped me to work out what needed to be where, and how to place both the furniture and people. After completing the basic structure of the kitchen, I started decorating, working from the back wall forward.

I started with the stoves. I deliberately chose two beautiful quality British-made cast stoves and one more affordable wooden model, to show that you can mix and match. Before fixing them in position, I drilled through the back wall to run cables from a lamp on the table, plus the cables from the electric fire in the range cooker.

I had already fixed the corner unit in position (made from two shop units cut vertically at 45 degrees, then butted up to each other) and so placed the first stove next to it. I had created a stove pipe from Plastruct tubing and painted it black to give the stove group some symmetry.

The large range cooker was placed next to it and a false chimney breast fixed in position (made from a ‘u’ shape of 2mm Plastruct sheeting painted to match the walls), the mantelpiece edge was finished with a fine wooden moulding painted black to match the stove.

The third stove, was the wooden model, which I painted satin black with brass details to match the other two stoves. With all three fixed in place, I dressed the tops with a selection of copper pans, and two fish kettles on the third stove.

I dressed the mantle of the range stove with a selection of accessories, a jar of Mintoes (cooks treat!) some salt glaze jars (one with spills for the fire) a Cornish ware pot and a small blue and white china pot. Mixed in with these are ladles and spoons to help make the stove look ‘active’. Above the range I added a framed print of a still life featuring produce and game. 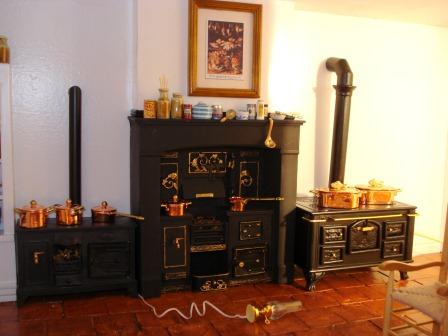 After the stoves, I dressed the corner unit with a selection of stoneware pie dishes, tin boxes of stores, large copper soup pans, salt glaze storage jars and demi johns. 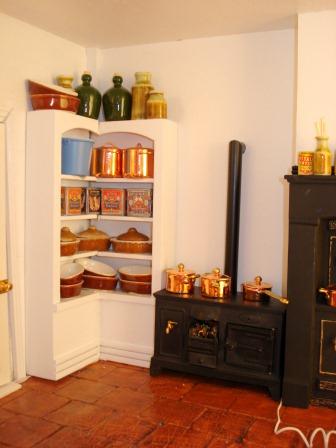 I have to confess to a little cheat here, as before fixing in the back wall of the cooks scullery partition, I dressed the butchery corner and fixed that in position. I drew a pencil line on the wall at the height of the butchers block and added a couple of rows of white tiles (dark blue glazed ones painted gloss white as I didn’t have any white ones and wanted to get on!) and I then fixed the butchers block in position. You might notice that once again I have failed miserably to cut a straight line and have repeated my trick of adding a block of wood in the corner to disguise it!

There was just enough room to get a stiff brush and metal bucket on the floor between the stove and block, and the block was completed with some knives, a saw and three wonderful dead birds by Nicola Croad (two geese and a turkey). 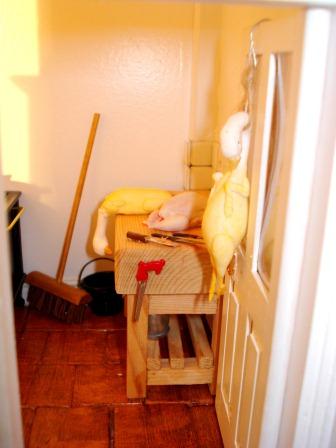 With the back wall done, I then turned my attention to the dressers. I had already worked out the wall length needed at the room partitioning stage, so that I could fit the dressers opposite each other with a chair at each end. In particular this affected the final depth of the room, the position of the hall door and the size of the corner unit (although it may look like it sometimes - these things don’t fit beautifully by happy accident – It was all well planned!)

I had been collecting bits for the kitchen for some time before actually getting around to the dressing, and so put the whole lot out on my workbench and sat in the middle of it with the two empty dressers –bliss! I had a really good play and then settled down to fix my choices in position.

The dresser on the left features packets and tins, a beautiful cottage-shaped teapot, some stripy and plain cream-ware, pie dishes fill of fruit and mushrooms, a wooden board with bread and bread knives, and a lamp. On the top shelf is a selection of tureens and storage jars, and below the drawers are crates of vegetables and a basket of kitchen linens to be washed. 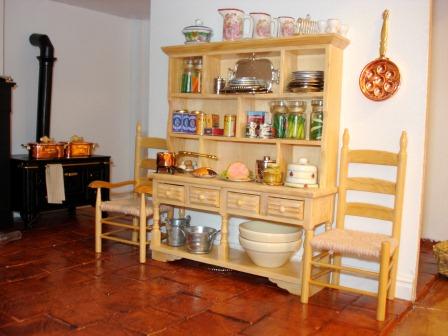 The right hand dresser features more storage jars and bottles, as well as a selection of serving platters and trays, a ceramic cheese dish, a cut boiled ham, a pie with a slice missing, and a small copper sauce pan cooling on a trivet. Above on the top shelf are the obligatory period set of graded-size jugs, as well as a tureen and a set of egg cups. Below are some very large ceramic mixing bowls and a couple of stainless steel buckets.

The last remaining item to dress was the kitchen table. At one end I placed a working lamp, with the cable running across the floor to the back wall. To disguise the cable I painted it with matt enamel paint the same colour as the floor tiles. 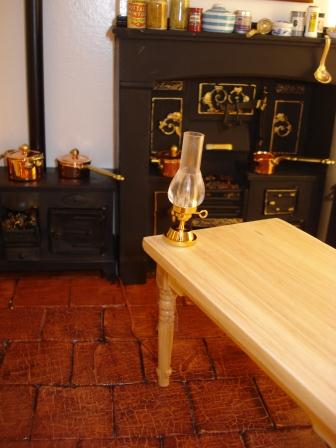 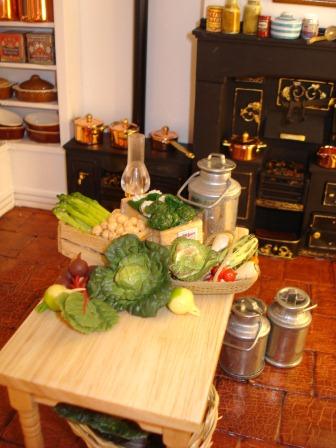 As I could not find a single table big enough, I placed two tables together, starting at the back end, piling it high with vegetables, and a milk churn (with two more on the floor below the table).

I worked my way down the table changing from vegetables to cooking, with pots of flour, butter, scales, pan and a plate of eggs. Underneath the table I added a crate of vegetables, a large ceramic crock and various useful baskets and buckets. 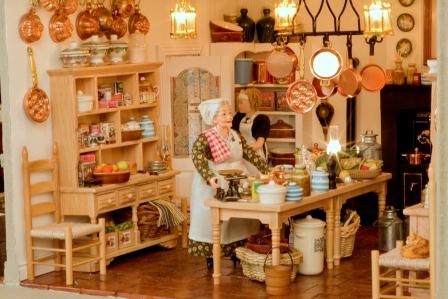 It was at this point that I realised that I had neglected to put in any ceiling lights! So I had to cover over the kitchen table and drill holes for four lantern-style lights. While I had my trusty Dremmell in hand, I drilled a couple of extra holes to take a ceiling hanger for pots and pans. It was a bit tricky to work out how to fix the hanging chains to the ceiling. My (eventual) solution was to tie a ribbon through the chain and poke it through the hole in the ceiling. I then taped down the ribbon, glued the chain in the hole and when the glue was dry removed the tape and ribbon. 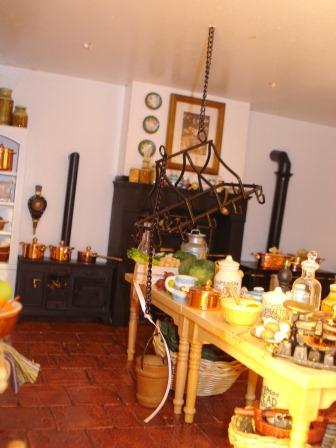 With pans on the hanger over the table, and lights installed, it was down to the crucial finishing touches. I decided that no large kitchen was complete without a collection of copper moulds, which I hung on a pair of brass racks (originally supplied to hang a set of brass ladles and spatulas). I thought the back wall still looked a little bare and so I added some decorative plates beside the framed print on the chimney breast and a painted cast metal bellows over the first stove.

The staff were the last things to be installed, the maid was first, and in typical Featherstone style she is standing in an open doorway talking to the valet in the hall (I love ‘inter- room’ activity – it gives flow to a static scene and creates interest). The chef has just come around the corner and is stood facing the cook to look as if they are talking. The cook stands at the kitchen table and is stirring a mixture in a bowl while listening. The last two living creatures are the cat curled up on the kitchen chair looking across the room to a tiny mouse by the leg of the chair opposite.

GO FORWARD TO THE FINAL PART 24 OF THIS SERIES

Enjoying the Featherstone series? Sign in to the Featherstone Hall Hotel visitor’s book, and leave a comment, visit: www.dee-dawdesigns.com/page16.htm If you have any questions about the project.