Following on from part four of the Featherstone Hall Hotel series, Julie moves onto the dining room of this incredible dolls house…

Having constructed the conservatory creating the illusion of an ‘outdoors’ indoors, Julie was left to consider the decoration of the dining room itself.

To celebrate Julie’s love for all things gold and shiny, the dining room was designed to be fancy. As the most glamourous room in the dolls house, totally ‘over the top’ wallpaper and chandeliers to die for were used. These materials were the most expensive items in the house, but worth every penny.

With the construction of the conservatory at the rear of the room, the available space for the dining room was reduced, so the illusion of a big room was created. The walls were painted ‘warm magnolia’, and self-adhesive real wood strips make the floor, which has been coloured with a ‘Burmese Teak’ stain. The floor was varnished with several coats of clear polyurethane varnish. 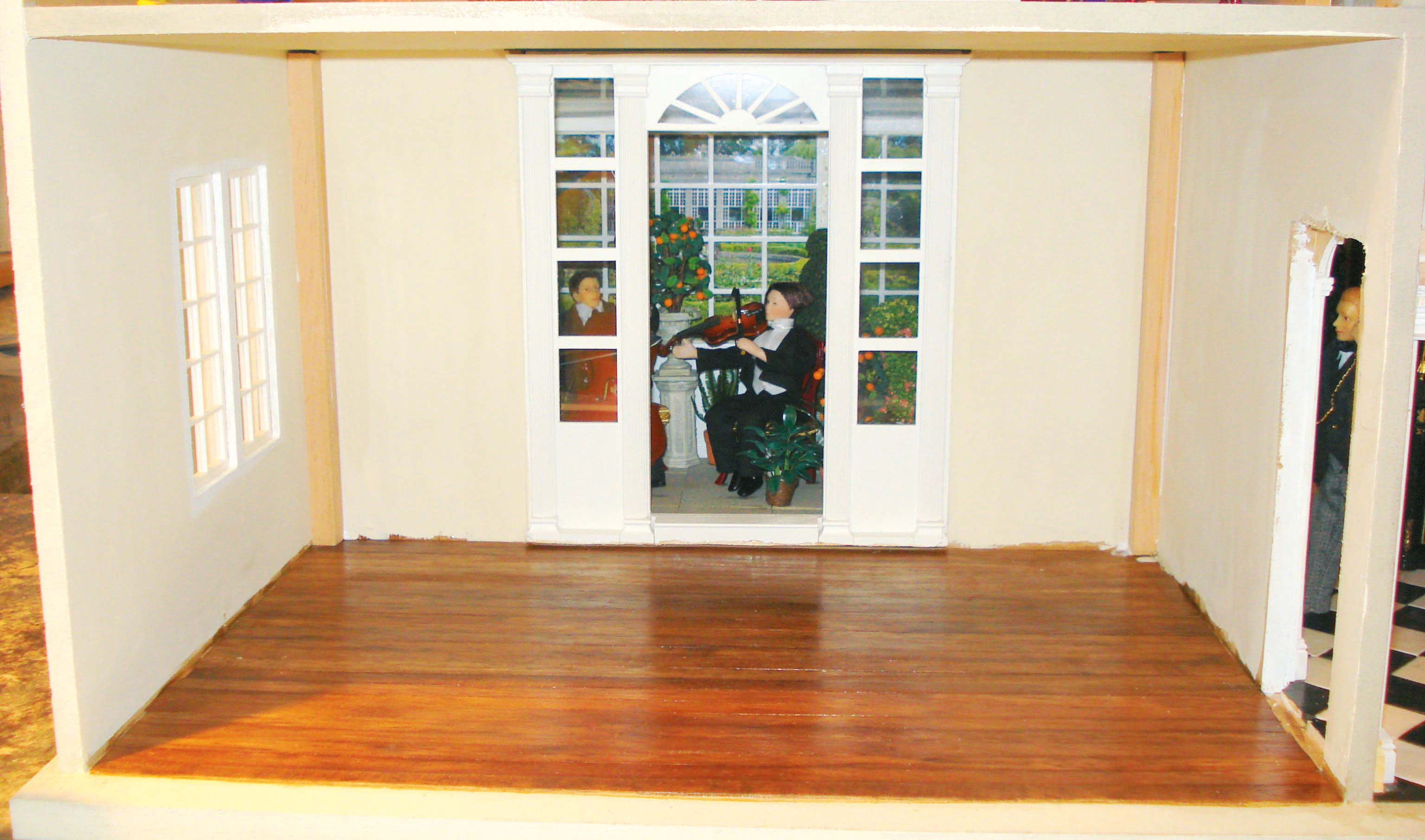 The extra walls were made with MDF sheet cut to size and the gaps in the corners were covered by adding some 10mm square wooden battens. This made it a lot easier to fit the elaborate coving, as this didn’t have to be mitred to fit the corners. After the coving, the dining room door frame was added around the already hung door between here and the reception. The frame was another exterior door frame with the door removed.

The next job was the wallpaper which was carefully fitted into the room, cutting an aperture for the window. This was stuck in position using the same wallpaper border adhesive used on the brick paper outside the house. The left-hand wall was papered with a strip of small panels of the same wallpaper and two rows of Dutch metal strips above and below the small panels instead of dado rail. The wall was completed with window architrave. 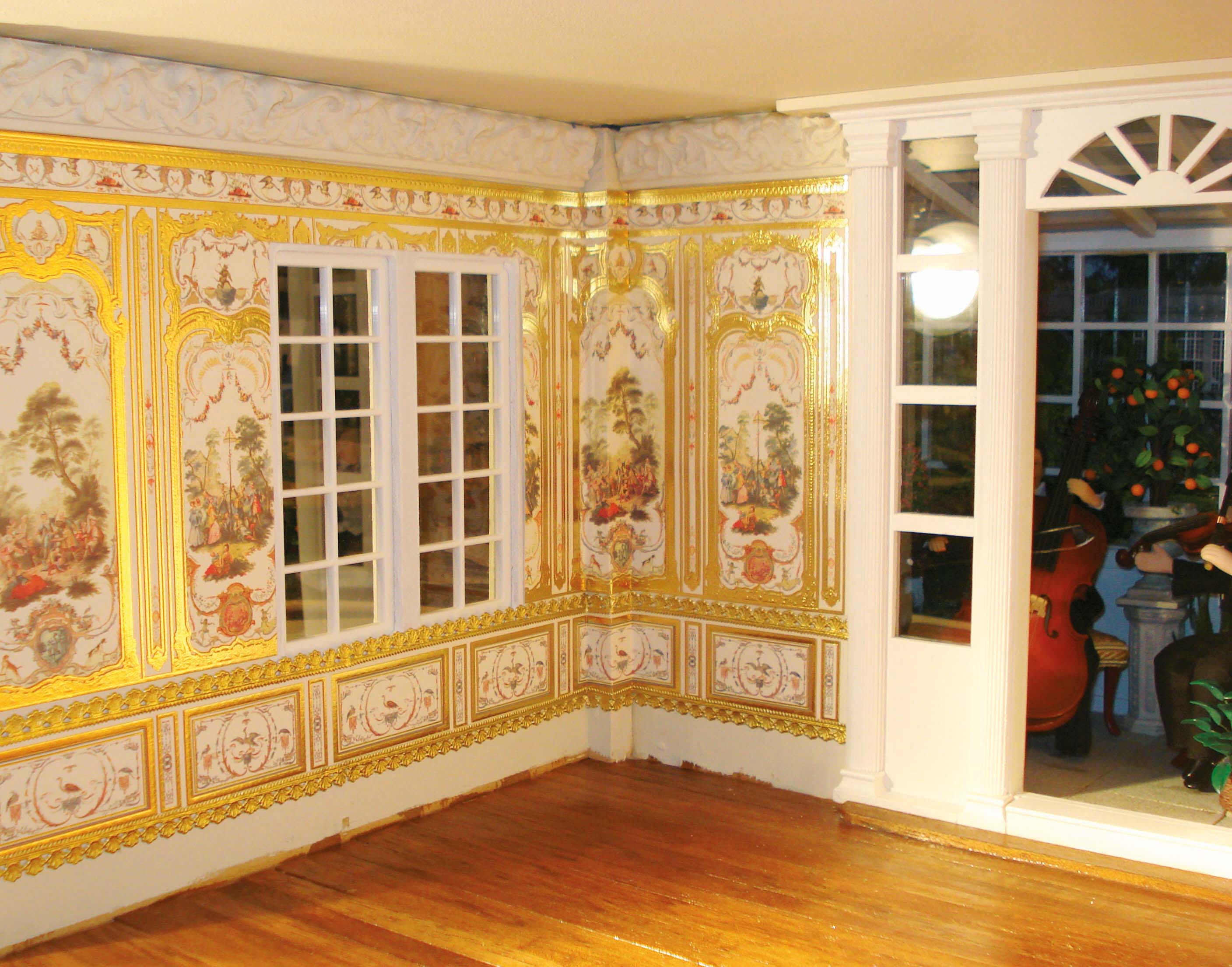 Top tip! Dutch metal is a foil covered embossed paper and is available from good craft suppliers – it gives a very detailed gilded 3D effect. Peel off borders are a good substitute.

The right-hand wall was papered around the door frame and should have been done before sticking the door frame in place. The room was finished with white skirting boards.

On the back wall, two serving dressers were placed either side of the conservatory door, filled with glassware and plain white plates. Above both are stunning over-mirrors to reflect the light and make the room seem bigger. Huge flower arrangements were created for the top of each shelf. Both dressers were then filled with a selection of foodstuffs, bottles, cutlery and bling. One dresser has savoury morsels on silver platters, ham and lobster – the other sweet delights. 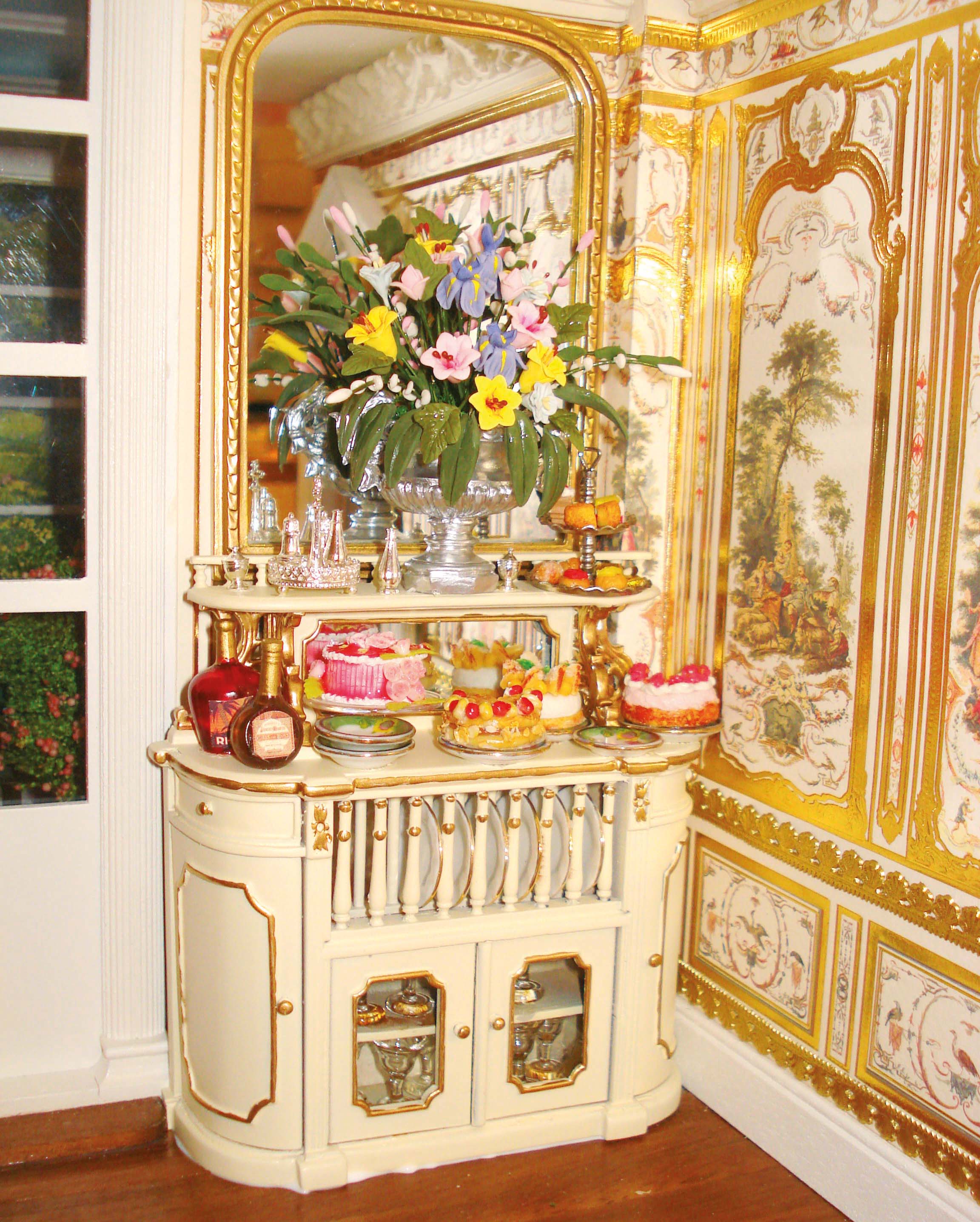 Curtains were made from silk and hung in place with tie backs. 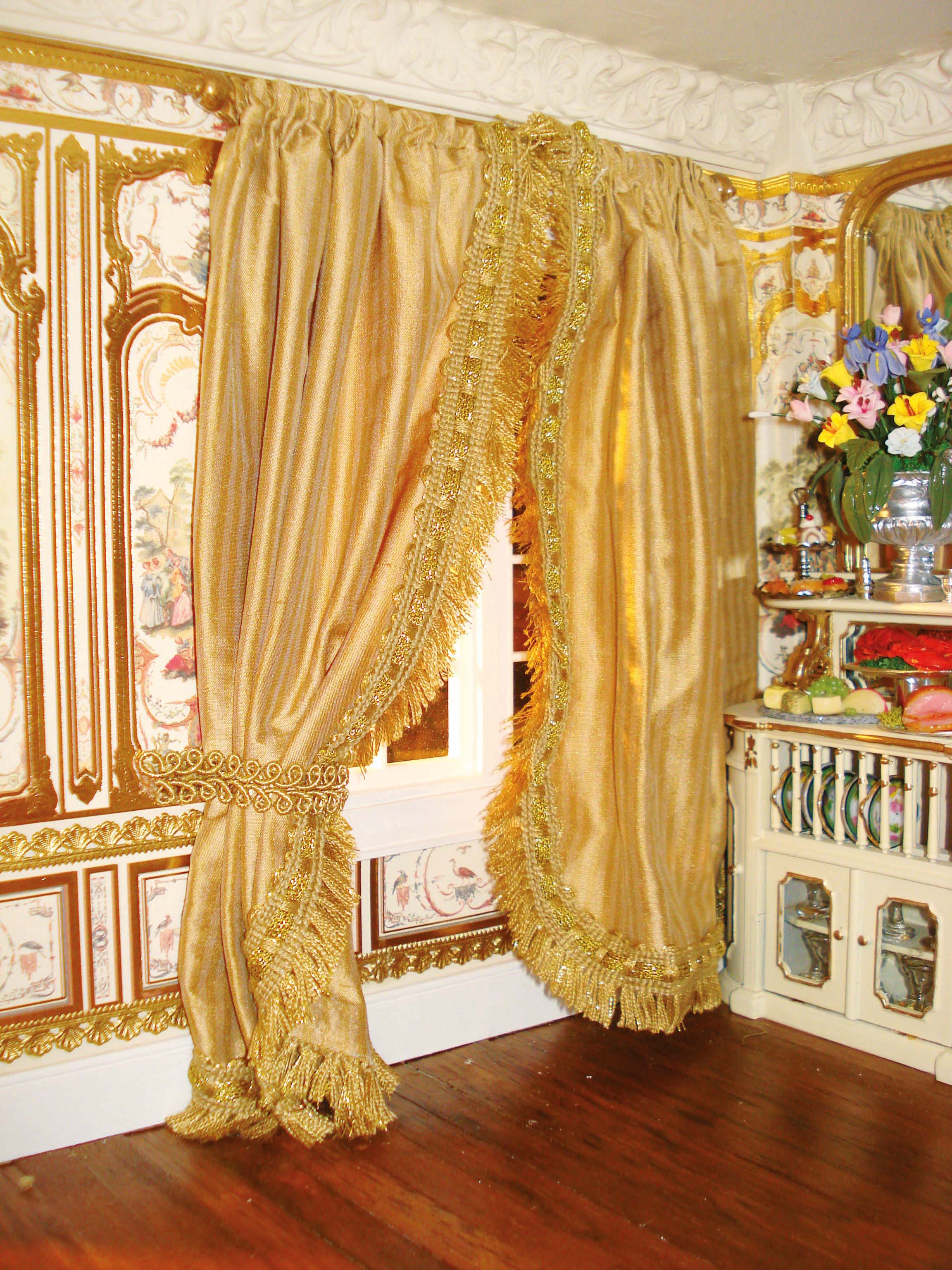 A third dresser was painted to match the other two and placed on the side wall, covered with cakes and a pyramid of fruit and foliage. It remained loose until the house front panel had been hinged, then fixed in place. 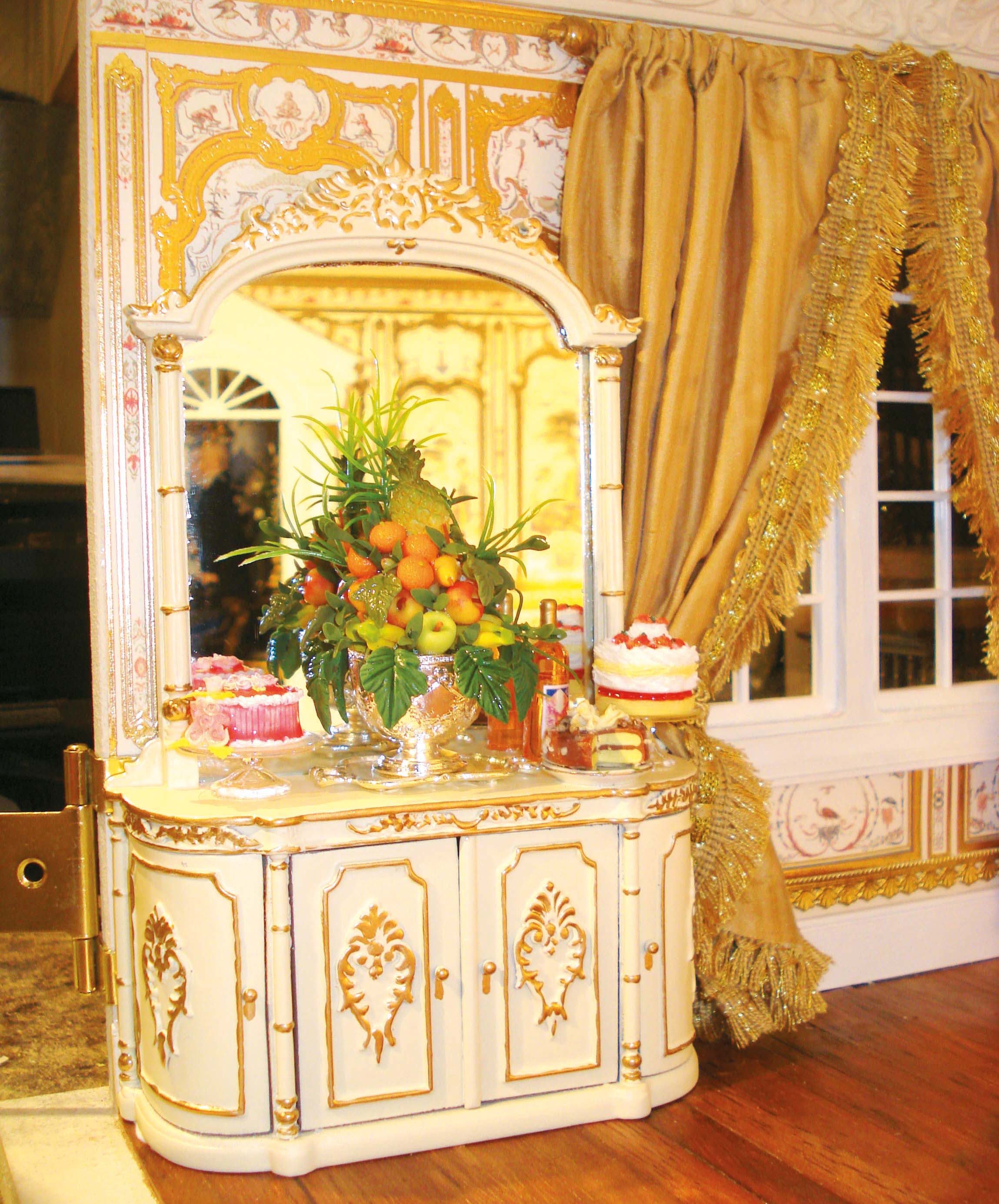 Crystal chandeliers were added from two huge ceiling roses and the wires taped to the floor above.

The room was now almost ready for the finishing touches, central furniture and dolls.

To see the next installment for the final part of the dining room decoration see part six. To go back to part four, where Julie designs and decorates the conservatory.