It's Play Time - Miniature Games for the Dolls House It's Play Time - Miniature Games for the Dolls House

Jane Harrop looks at all different kinds of games, and especially those that will downsize for the dolls house. She starts with a brief history. ...

It's Play Time - Miniature Games for the Dolls House Images
The research of a project in order to discover its origins and developments is an important and enjoyable aspect of this hobby for me. Twelve years ago I taught two very enthusiastic adult education classes to construct and stock a 1/12th scale Edwardian toy shop. This was followed up several years later with my book ‘Toys & Games’ published by David and Charles.

I am delighted now to return to all my reference books and present you with a general history of ‘games’ and some of the accompanying photographs are projects from my book.

The Oxford dictionary defines a ‘game’ as:
• a form of competitive activity or sport played according to rules
• an activity that one engages in for amusement
• a complete episode or period of play, ending in a final result

The playing of games dates back to ancient times and is thought to have originated from religious or superstitious rituals and customs. During ancient Egyptian festivals a game of catch was played by priests using a ball that represented the head of the God Osiris. Other ancient societies often used a ball to represent the sun and an activity that may have begun as a ritual to encourage the sun to shine and produce good harvests gradually turned into a game played for amusement.

It is thought that skirmishes between primitive tribes may have been the predecessor of team games like ancient forms of football!

Not all early games were just physical some were also invented to educate. Surviving records show that ancient civilizations played simple mental games like noughts and crosses as well as more complicated board games.

Today many games are nothing like their beginnings and as the centuries have progressed, so has the development and popularity of games, appealing to all ages and walks of life. Some games need sophisticated equipment, and others require only imagination, energy and a playmate.

Up until the end of the nineteenth century only the very wealthy were able to afford games made by craftsmen, and it was only when they began to be made in factories that they became cheaper. By the beginning of the twentieth century, there was something for everyone – well-made toys and games for the rich and cheaper toys and games for the less affluent. Together with an increase in the amount of leisure time, the playing of games was considered a recreational activity to be enjoyed by both children and adults and was a particularly popular pastime during the Edwardian era (1901 – 1910).

I will be producing projects over the next few months that are included in my Toys & Games book; these fall mainly into the Victorian period (1837–1901) and onwards. 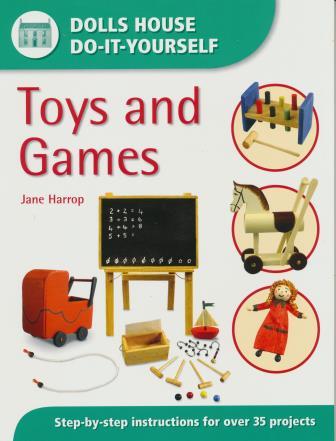 There are so many varieties of games that have been conceived by mankind that it is difficult to classify them.  Playing a game brings people together regardless of age, gender, status and ability and provides hours of entertainment and fun. Solitary games may not be as social, but like all games the aim is winning. Perhaps one of the most appealing and addictive elements of game playing is chance; in that the course of a game is never the same. In the first part of this new DIY series, I will be making the miniature croquest set below....... 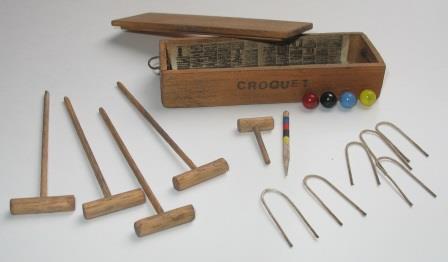 
This feature was originally published in Dolls House and Miniature Scene magazine. If you like making miniatures, why not buy yourself a copy of the magazine. Or better still take out a subscription so you never miss an issue. For fans of Facebook and Twitter, or to email, print or comment on the feature, please use the buttons above to share with your friends.
Content continues after advertisements