Jane Harrop looks at the history of lawn games and shows you how to create your very own miniature croquet set...

A lawn game is basically any game that can be played outdoors on a lawn. There are many documented outdoor lawn games, a lot of which are very similar in form with origins dating back to ancient times. I’ve taken the most well-known lawn games and looked briefly into their history.

The game of quoits began in ancient Greece when closed metal rings were thrown at a distance. The game evolved when a spike (called a hob, mott or pin) was positioned in the ground and the aim became to pitch the discover or near to the spike.

Lawn bowls is claimed to be Britain’s oldest lawn game with a continuous history dating back to 1200 in Windsor. The oldest sporting club in the world is Southampton City Bowling Club, regularly used since 1299. The earliest evidence to a form of the game dates back to ancient Egypt when the aim would have been to strike the target, against getting the bowl as close as possible. Like croquet and lawn tennis the game of lawn bowls was more popular amongst the well-to-do gentlemen before the beginning of the twentieth century.

The origins of the game of skittles is closely associated with the game of lawn bowls. It has many variations including nine pins which began in medieval Germany where it was particularly popular.

Lawn tennis is an off-shoot from ‘real’ (also known as royal or court) tennis and was first played during the Victorian era. Real tennis dates back to ancient times, but it was in France during the twelfth century that the game developed. Not all early tennis was played on a court, often just out in the open. In 1874 Major Wingfield invented a very similar game to real tennis, simplified and played on a smaller court, which eventually evolved into the lawn tennis game we know today. The game became extremely popular with the upper classes at that time and spread rapidly around the world.

Mallet and ball games are thought to have been played in England and Europe during the middle ages. The modern game of croquet was introduced by John Jaques at the Great Exhibition in 1851 and soon became popular, as it was the first outdoor sport that could be played by both sexes on an equal footing. It was extremely popular amongst the middle-class Victorians as it gave young men and women a legitimate opportunity to mingle.

Now learn how to make a new croquet set. For information on making a croquet set look used/distressed please refer to step 12 before making up the set.

1. Transfer the measurements to the two box end pieces and use a 3/64in (1mm) drill bit to drill holes through the wood pieces. 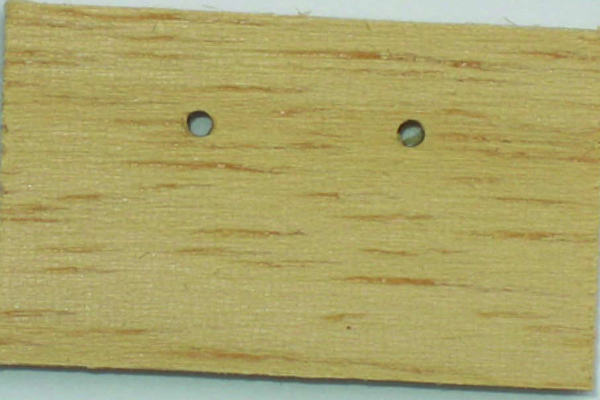 2. Take the inside lid frame pieces and mitre the ends on each to an angle of 45 degrees. Optional – Stain all the wooden box components with a light coloured water based stain. Apply the stain sparingly to avoid the wood warping.

3. Take the two end pieces and use buff coloured cotton button thread to thread through the holes to make a handle on each. To do this, place a mallet head piece (see the contents list) between the loop and the wood to ensure that the two handles will be the same size. Knot the thread on the opposite sides and trim neatly. Secure the knots with a dab of glue and remove the mallet head. 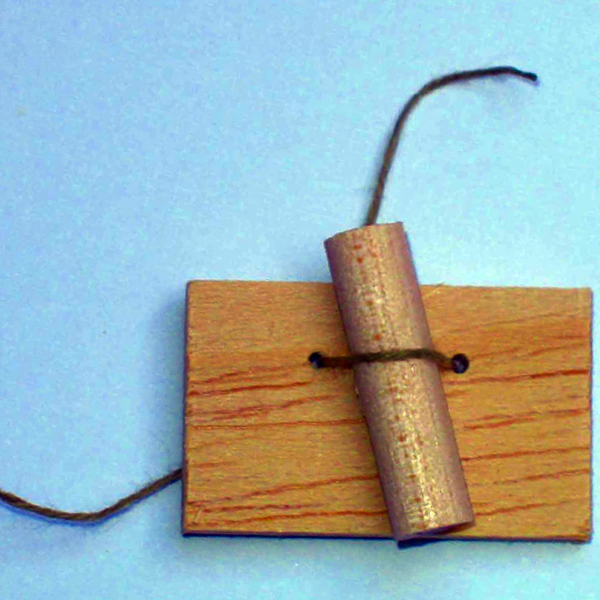 4. Glue the box ends to the narrow outside edges of the base wood piece, so that the base is sandwiched between and the handles are positioned as shown. 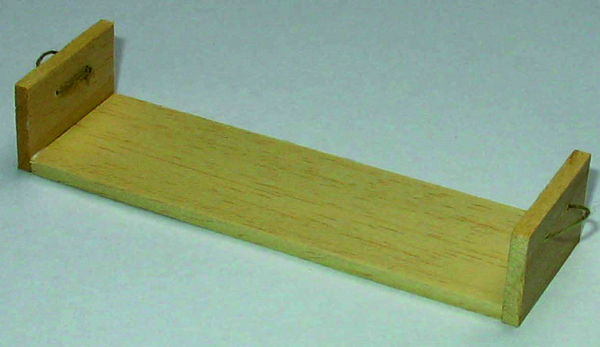 This feature was originally published in Dolls House and Miniature Scene magazine. If you like making miniatures, why not buy yourself a copy of the magazine? Or better still take out a subscription so you never miss an issue!

5. Position and glue the box sides on each side of the construction. 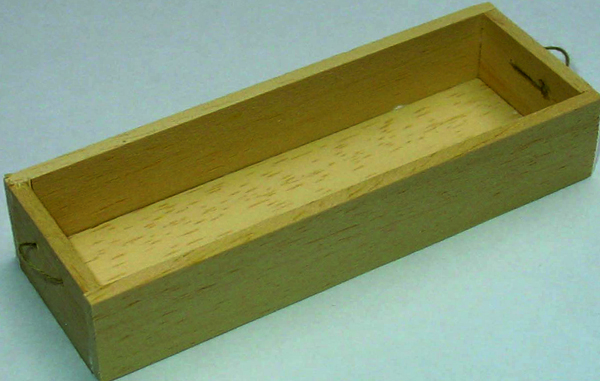 6. Glue the inside lid frame wood pieces together, and once dry glue centrally to the underside of the lid. Optional – Use a small rubber printing set to print ‘croquet’ on each side of the box.

7. Take the mallet heads and drill a 3/32in (2.5mm) hole centrally and partway through each of the dowel pieces. Repeat the procedure with the hammer head. 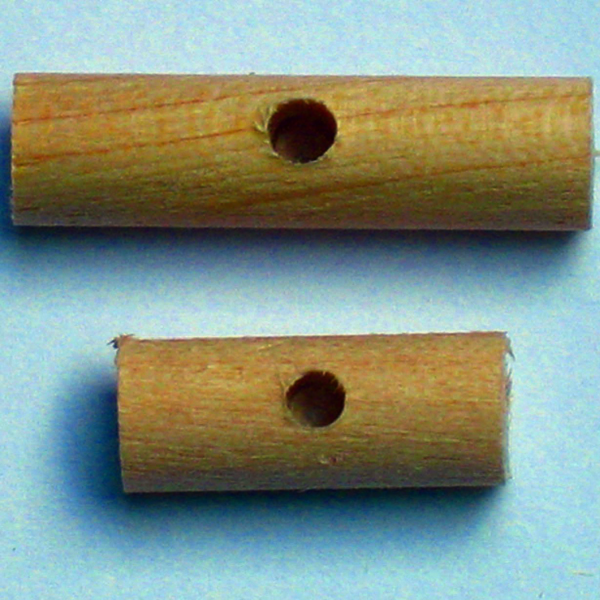 9. Make the winning peg by cutting a 1-1/2in (38mm) length from the end of a cocktail stick, this time keeping the tip attached.  Use crafter’s acrylic paint to paint the winning peg as shown in the photograph. Allow each section to dry before starting to paint another. Also paint the four wooden balls. 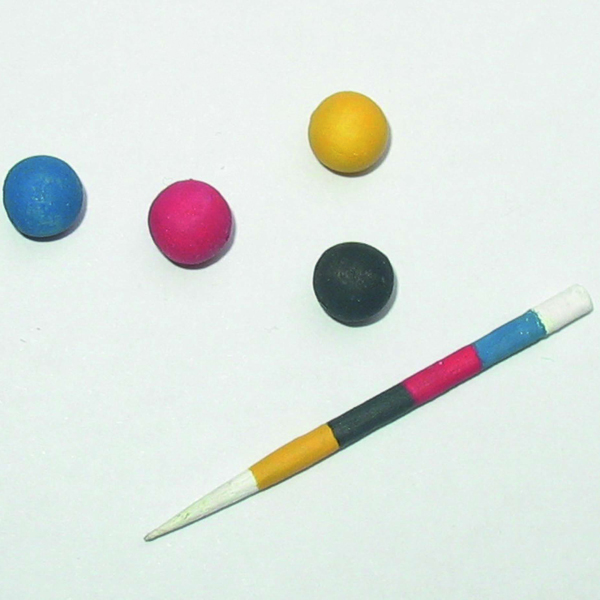 10. Make the hoops by bending a 2-1/2in (64mm) length of 22 gauge-paper covered wire around a piece of 1/4in (6mm) dowel or a pen to curve the top. Repeat the process until you have six hoops. Trim and even the ends, so that the hoops stand approximately 1in (25mm) high. 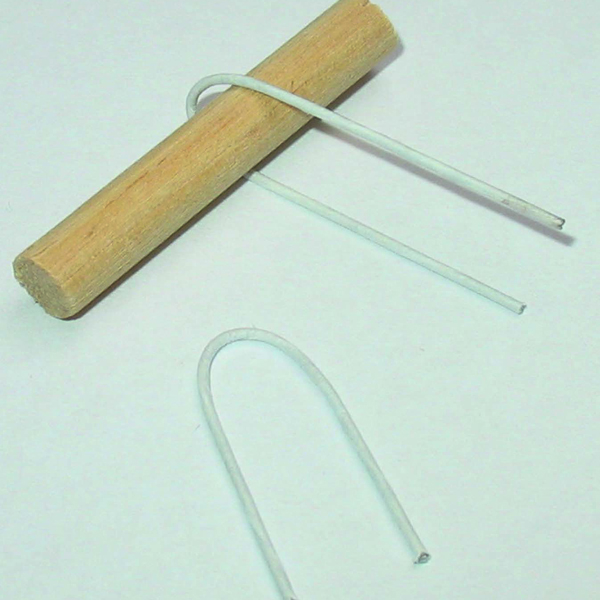 11. Cut a piece of tissue paper to line the inside of the box and fill with your contents. 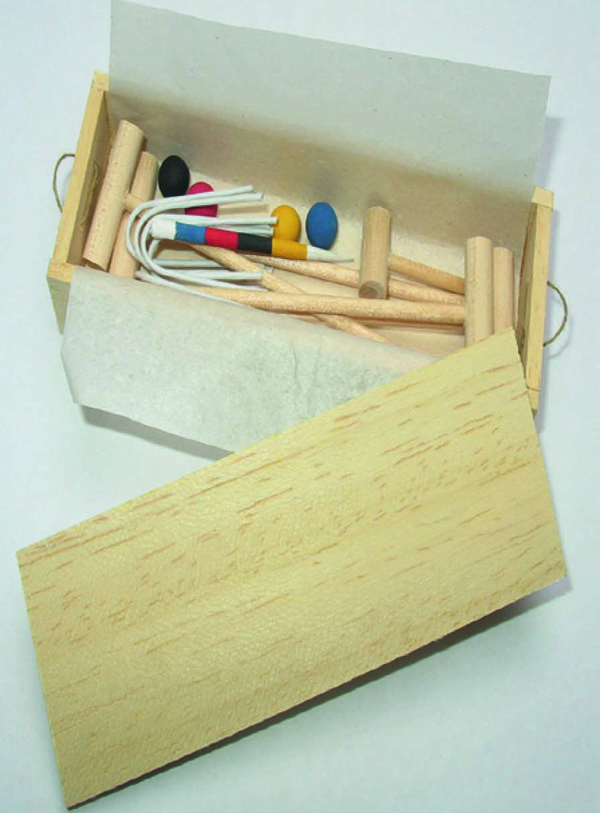 12. To make the croquet set look used or distressed. Lightly wash over all the pieces with a diluted light water-based stain and leave to dry. Apply a darker/mud-coloured wood stain to the bottom of the hoops and the winning pen to create the effect of them being pushed down into the ground. Line the box with a piece of stained miniature newspaper. Rub over parts of the box and contents with a very small amount of black and/or brown shoe polish, then rub away using a clean cloth to leave a darker and subtle colouring in the grain and cracks and crevices of the wood. Optional – Use a ‘John Bull’ printing set to stamp the word ‘croquet’ on the side of the box. 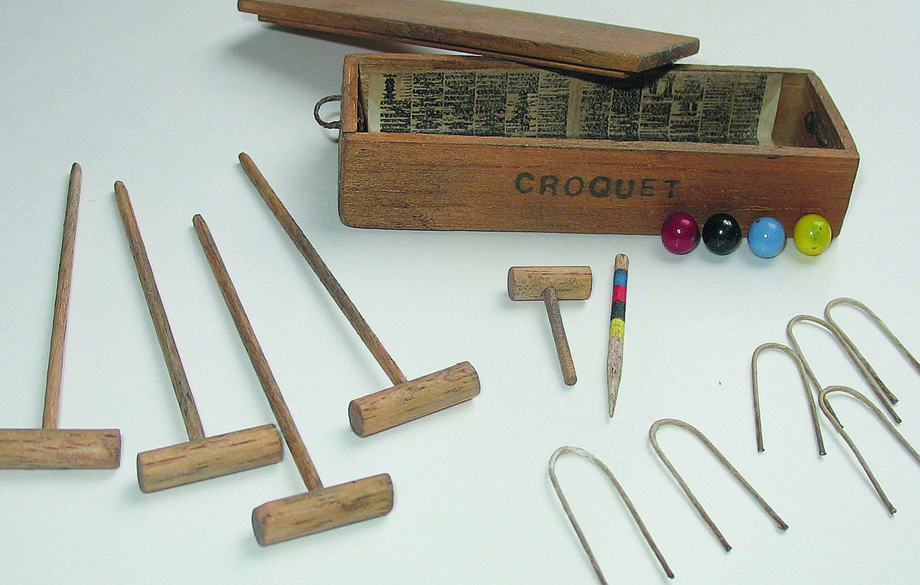 Enough playing! Tuck into this miniature fish and chips tutorial made from polymer clay (sadly not edible, but how realistic do they look?!).