English Butcher's Shop from the 1880's

Moi Ali takes us on a nostalgic tour of the Museum of Childhood in Edinburgh. ...

Memories of Childhood - A Visit to the Museum of Childhood in Edinburgh Images
The city of Edinburgh has a large dolls’ house and miniatures collection which can be found at the Museum of Childhood in the city’s historic and beautiful Royal Mile. Admission to the Museum is free of charge, which is always a bonus for those who have spent too much in the city’s tempting tourist shops and tasty tea shops! With five floors of childhood memorabilia, visitors will find antique dolls, dolls’ houses and miniature shops, making this is a must-see museum for the avid miniaturist. There are also Dinky cars, old board games, construction toys, teddies, prams, toys and games, old slot machines, period comics and books, automata, train sets, pedal cars and trikes… in fact, pretty much anything and everything to do with childhood and growing up from the 18th century to the present day.

The world’s first museum of childhood, it was founded in 1955 by town councillor Patrick Murray. He began the Museum collection after reading in a newspaper about two of Queen Victoria’s dolls, which were being sent to London as there was nowhere suitable in Scotland to display them. The press article spurred Murray into action and a new museum was born. It’s a great place for people of all ages, but I found that my mother – who is now in her 80s – appreciated it far more than my children. Nostalgic adults, male and female alike, will enjoy a superb trip down Memory Lane here.

What started all those years ago as Cllr Murray’s own collection of cherished childhood treasures has grown to over 50,000 objects, many of them donated by local people.

It’s hard to choose a favourite exhibit when the collection contains so many star items, but my personal best, by a whisker, has to be the English butcher’s shop dating from the 1880s, (main photograph)which even has a royal warrant. It is, perhaps, a strange choice for a committed vegetarian, but I just can’t resist it! Joints of beef, pork and lamb are temptingly displayed on a groaningly well-stacked table sitting outside the shop, while gruesome-looking whole carcasses hang from meat hooks, just as they would have in real life at that time. Two portly butchers hand-carved from wood complete the scene. Given the age of the item, the ‘meat’ is obviously not a lifelike polymer clay replica. Crafted from wood painted to resemble the real thing, it has a naïve charm of its own. If I could take one item home with me it would be that butcher’s shop.

The collection also contains a couple of English open-fronted grocers’ shops dating from the late 19th century. One contains wooden boxes of soap, ginger, pepper and other produce, plus tins of peaches. The other is a bit more upmarket, with bottles of champagne, Christmas puddings, Lyon’s coffee, breads and hams. Much of the stock dates to a later period, but is vintage nevertheless. What I particularly love are the wooden apothecary-style drawers with real china labels indicating the content of each. There’s also a greengrocers dating to 1890, with shelves of produce and crates of fruit and veg. A particularly charming shop is the French nineteenth century épicerie stocked with delicious continental delicacies.

The épicerie aside, most of the displays are British. However, there is a very quaint miniature milliner’s kiosk from Peru, complete with a petite Peruvian milliner with her tiny titfers, and a small wooden American house (roughly 24th scale) from the late 19th century with the most charming flower garden at the front of it. Having recently completed a tour of Germany, I was pleased to see that country represented in the form of the Nuremburg kitchen. This open-fronted model dating from 1900, with its lovely range stove, is stuffed full of miniature vintage kitchenalia – iron pots and pans, rolling pins, chopping boards, gingerbread cutters, baking trays, scales, graters and every other type of utensil you could imagine. Being a German kitchen, it also has a shelf-full of beer steins! 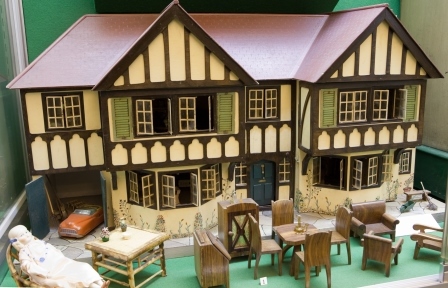 Triang has long been a favourite among period dolls’ house collectors, having cornered the market in mass produced dolls houses in the 1930s. Triang enthusiasts will love Princess Elizabeth’s House, a Tudor-style thatched house built by the company in the 1930s. Modelled on Y Bwythn Bach, or the Little House, the original was built, furnished and decorated by Welsh craftsmen and presented to the Queen (then Princess Elizabeth) on her sixth birthday in 1932. The real Y Bwythn Bach, in the grounds of Windsor’s Royal Lodge, is 24 feet long, 8 feet deep and contains rooms just 5 feet high. Originally it had heat, light, running water, gas, a working fridge, a bathroom with heated towel rail and a telephone – at a time when many real homes lacked these facilities. Fit for a queen, in fact. The royal Wendy house was recently refurbished by Princess Beatrice. 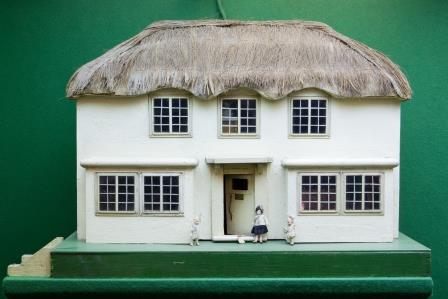 Princess Elizabeth’s House: A Tudor-style thatched house presented to the Queen (then Princess Elizabeth) on her sixth birthday in 1932
The Triang version in the Edinburgh museum is a mass-produced commercial house of more modest proportions, being just 24” x 30” x 17”. It was of course designed at the time for children to play with; today Triang Princess Elizabeth houses fetch big money and are reserved strictly for serious adult collectors! The one in Edinburgh is displayed alongside a souvenir brochure that was produced at the time the house was launched, which cost a modest 3d (old money) back then. I imagine that few of the souvenir dolls’ house brochures survived.

The Edinburgh collection also features home-made one-of-a-kind miniature houses. The Stockbridge House is a solid building constructed in 1870 and named after the Stockbridge district of Edinburgh from whence the house hailed. Another Edinburgh dolls’ house – my favourite of all the houses – is a wonderful Art Deco dwelling crafted during the Second World War by a father for his two daughters to play with. Modelled on the family’s own house in the Fairmilehead area of the city, it is an inspiration for Deco fans. Typical of houses from this period built for the aspiring middle classes, it features a garage for the family’s motor car. I can almost see that dedicated dad working away in his dimly-lit workshop at the bottom of the garden using his own father’s handed-down woodworking tools, amidst the smell of sawdust and Humbrol paint, lovingly creating this treasure for his girls. Little did he know that one day it would end up in a museum! You will also find displays of miniature furniture and other accoutrements. I especially love the nineteenth century carved ivory filigree furniture and the Japanese table and chairs, but my absolute favourite is the Art Deco mint condition metal bedroom suite, made by Dinky in 1936 for the Meccano Dolly Varden dolls’ house. I’d never heard of the Dolly Varden house before, so I did some research. Now for the history lesson … In 1936, Dinky – more famous for its diecast toy cars – introduced a series for girls, which included the Dolly Varden Dolls' House, and four rooms of diecast furniture. The house was made of leather board and very few have survived. The furniture is also rare, as evidenced by the fact that a very play-worn, incomplete set was selling on eBay, at the time of writing, for £325. The problem was that pre-war and wartime furniture sets (those that were not offered up for scrap as part of the wartime effort) were prone to a kind of metal fatigue that caused them to disintegrate, so the Edinburgh set is a rare survivor.

Aside from the miniature houses and shops you will find full-size room sets from which you can take inspiration for your scaled-down projects. There is a Victorian schoolroom with blackboard, slates for the children, and wooden desks with inkwells. Also from the Victorian period is a shop window from a children’s shoe shop, containing gorgeous leather boots, satin beaded shoes, exquisite kid leather gloves, tiny purses, muffs and slippers for little feet. And there’s a Victorian nursery all set for a children’s tea party. If you are visiting the museum with the whole family, you’ll find something to interest everyone. Kids will love the hands-on exhibits, which include vintage slot machines of the type found on seaside piers from the Victorian era right up to the early 1970s. I recall the ‘Haunted House’ slot machine from trips to the south coast as a child in the 1970s and was thrilled to see one in Edinburgh – and it only costs 5p to use! There’s also a Sweeny Todd slot machine, which I also remember from childhood, and Punch and Judy displays. At the risk of a bit of gender-stereotyping, men may enjoy (as will the women!) the Dinky vehicles, train sets, planes, toy airports and garages.

Few things in life are free, but this wonderful museum is one of them. Makes sure it’s on your sightseeing list if you’re ever in Scotland’s magnificent capital city.

Admission: Free
Access: Galleries 1 to 3 are fully accessible. There are stairs to galleries 4 and 5.

This feature was originally published in Dolls House and Miniature Scene magazine. If you like making miniatures, why not buy yourself a copy of the magazine. Or better still take out a subscription so you never miss an issue. For fans of Facebook and Twitter, or to email, print or comment on the feature, please use the buttons above to share with your friends.
Content continues after advertisements