Parlour games were popular recreational pursuits for wealthy adults and children in the late Victorian and Edwardian era’s ...

A parlour game is a general name for an interactive informal game played indoors. The hey days of parlour games has to be during the late Victorian and Edwardian era’s when they were one of the most popular recreational pursuits for upper and middle class adults and children.

It was adults who initially played parlour games for amusement, entertainment and sociability and it wasn’t until the beginning of the Victorian era that children were included and parlour games became associated with being a family activity, played in the parlour… hence the name.

Parlour games were obviously played a lot more during the shorter daylight hours of the winter season, against the longer bright days of the summer, when the Edwardians in particular encouraged outdoor pastimes as much as possible. Inextricably linked with parlour games, has to be party games, and particularly parties for children’s birthdays, which started to become popular during the latter part of the nineteenth century.

The first book to record and detail parlour games was published in 1825. During the golden age of parlour games, literally hundreds of books, comics and magazines of the period described games that could be played for the sole purpose of producing ‘merriment’ during leisure time. The most popular parlour game of the time was probably the acting game ‘charades’ where players had to guess the word or word being acted out by another player. 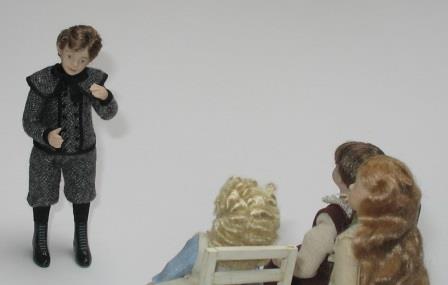 Many games don’t need lots of sophisticated equipment. One of the most well known props for parlour and party games would be the scarf, used as a blindfold in games like ‘Blind man’s buff’, where the volunteer has to catch other players with his eyes masked, and ‘pin the tail on the donkey’ where the a tail has to be attached to a picture of a donkey without being able to see. Another prop is the chair, used in games like ‘musical chairs’ where an unlucky player is out of the game once the music is stopped and there are no chairs available to sit on. Other simple items like thimbles, slippers and rings have provided hours of fun in the form of hunting games.

Guessing games like ‘Who am I?’ where a famous person has to be deduced from only ‘yes and no’ answers  and action games like ‘moving statues’ where a player has to turn at intervals and detect movement from other players, meant to be statues, are really very simple parlour games.

Memory games were also popular and included ‘Grandmother’s trunk’ which relied on player’s memorising a growing list of possessions belonging in the trunk, each beginning with a different letter of the alphabet. The most well known kissing game from the era was ‘Postman’s knock’ where recipients of letters paid the postman in kisses.

There were literally hundreds of parlour games in the categories mentioned above which were enjoyed in the comfort of many Victorian and Edwardian homes. Toy shops during this time were crammed full of toys and games, and smaller versions of outdoor games like croquet found their way indoors and offered many hours of amusement. 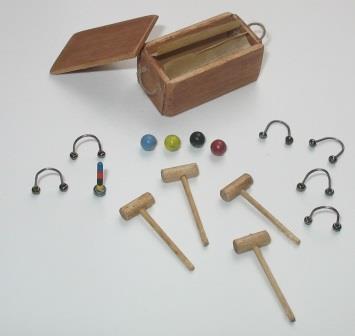 More entertaining than any parlour game, was the punishment given to the loser of a game. Initially they were required to ‘forfeit’ one of their personal belongings. Much to the amusement of the remaining players, they had to watch the defeated participant carry out a humiliating task in order to regain their possessions. The whole process became known as a ‘forfeit’ and there were numerous silly activities that could be performed, such as talking like a parrot, kissing your shadow and biting an inch of an imaginary hot poker. Double ‘forfeits’ were found to be particularly humorous, especially if it involved a lady and gentleman.

With so many distractions nowadays like the television, radio and electronic devises, the whole ethos of parlour games has declined; however, many of the games have been handed down through the generations and continue to provide amusement, entertainment and sociability just as they were intended to all those years ago.

These carpet bowls have been simply made from eight 3/8” (10mm) diameter round wooden beads which have been painted with black enamel paint. Once dry, I filled the holes with a fitting cocktail stick and painted one end black and the opposite ends… 2 x red, 2 x blue, 2 x white and 2 x yellow. The jack was made in the same way using a 5/32” (4mm) diameter round wooden bead and painted white. 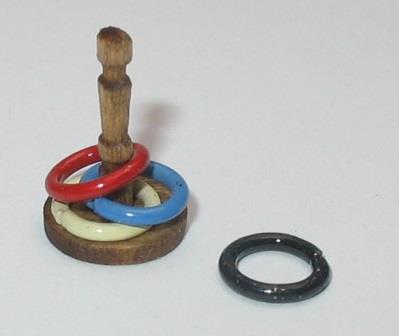 The table top quoits are made from a 3/4” (19mm) length of fancy ended cocktail stick and a 3/8” (10mm) round wooden wheel bead which have both been stained and secured together. The rings are made from 8mm diameter metal jump rings and have been coloured using spray paint. 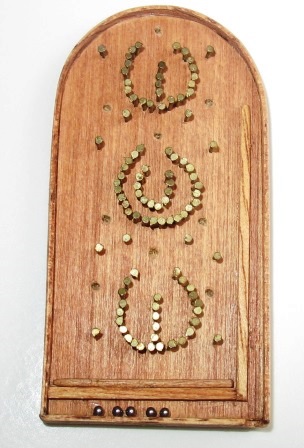 The miniature version of a ball and cue game, bagatelle was also popular. My book ‘Toys and games’ shows you how to make this, along with the indoor croquet set.