Jane Harrop tells us about playground games with ideas to recreate some of these in miniature for the dolls house. ...

Playground Games in Miniature Images
Jane Harrop continues telling us about games (in miniature). This time she looks at playground games. Many of the games listed below have been popular since the Victorian era and are considered important because of their contribution to the development of children’s mental, physical and social skills.

Balls have to be one of the most primitive types of games and are one of the earliest types of games recorded. Ancient Egyptians made balls carved from stone for bowling and lighter balls from papyrus and plaited reeds for throwing, tossing and catching. Like all toys and games, if you weren’t able to afford bought ones, they had to be homemade and over the centuries they have been made out of various materials including clay, stuffed leather and cloth, wool and even porcelain. Before rubber balls were invented, bouncing balls were made from inflated sheep’s or goats bladders and continued to be made in this way probably well up until the beginning of the twentieth century.

The joy of playground ball games is that they can be played singularly or in a group. Football originated in ancient Greece and Rome from pebbles being kicked from one person to another. The three balls here have been made from polymer clay and baked. Produce variations before baking by making indentations using a craft knife or adding texture by rolling on top of a piece of sandpaper. Polymer clay balls which have been hardened can also be painted and varnished to create extra effect. The smaller, brighter balls are plastic bullets for toy guns, and the football was bought from a shop selling cake decorating items.

The first games of conkers using autumnal horse chestnuts were recorded during the middle of the nineteenth century in England, and remained popular until very recently. Unfortunately, it has been banned now in many schools due to health and safety. Conkers can be made from a 3/32” (2.5mm) ball of polymer clay or cold porcelain as here. Colour using pastel chalks, part air dry (or part-bake) and drill through the centre. Pass a piece of cotton, sewing thread through the hole and knot one end. Glaze the conker with clear nail varnish and trim the thread once dry. Please see the main photo above. 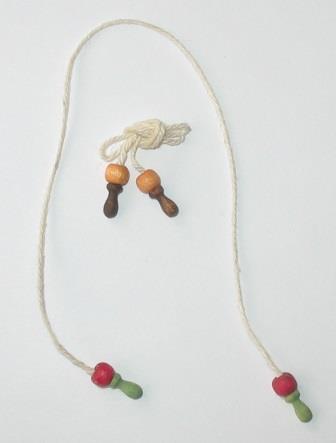 Skipping games have a long history although the origins are unclear. Ropes with knotted ends were used up to the beginning of the twentieth century when wooden bobbins from the mills were added for handles. A firm favourite playground activity, especially when played in a group with a long double rope and a few chants and rhymes. These single skipping ropes are made from cream crochet thread, small round wooden beads and belaying pins. Further details to make these can be found in my ‘Toy’s and Games’ book. 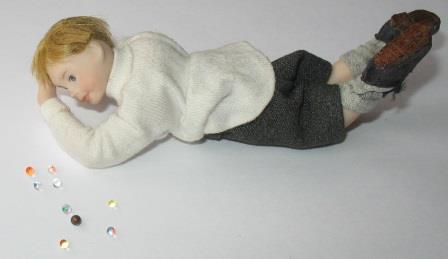 Early marbles were made from small round balls of stone, clay and real marble. Coloured glass marbles were first played during the fifteenth century in Germany, but it wasn’t until the middle of the nineteenth century when they were produced in quantity after special marble scissors were invented. During the Victorian and Edwardian eras and also for decades after, a young lad’s most prized possession in the playground would have been a veined ‘glassie’. Marbles in miniature can be made from no-hole clear glass micro beads, found in craft shops as a rubber stamping craft accessory and also from dolls and teddy bear making suppliers as a filling. They tend to vary in size, but generally seem to be between 1mm and 2mm diameter in size. 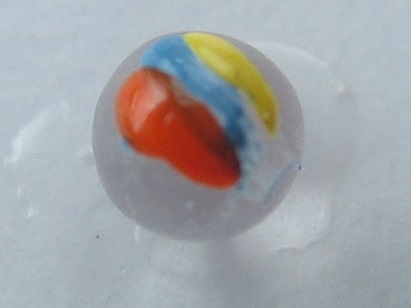 Miniature marbles can be fiddly to make, but it’s worth it as they are very effective. Attach one of the beads to a piece of plastic or shiny backing using a dab of tacky glue. Use a very fine paintbrush to add two or three lines of coloured paint, allowing each one to dry, before applying the next. I personally prefer to use water based enamels, but you can make your own by mixing tacky glue with crafter’s acrylic paints. Once the paint has dried carefully remove the painted bead from the backing, together with any glue that may still be attached. Roll over so that the painted side rests on the surface and the light reflects the painted colours through the glass. Repeat the procedures on more beads varying the colours and designs as you do so. Once dry, it’s a good idea to secure them into position in your chosen setting with a dab of glue. A mention must be given to the popular Victorian games of ‘hoop and stick’ and also spinning and whipping tops. Trundling and spinning games required lots of practise and skill to keep the hoop rolling the longest and the tops spinning. Another favourite was the cup and ball game and again you can find out how to make these items in my ‘Toys and Games’ book.

The most evoking of playground amusement in days gone by has to be those games which require no equipment, just a few pals, energy and imagination. Jumping games like leapfrog dates back to the sixteenth century and hopping games like hopscotch had its beginnings going back to 1801.

Chasing, running and catching games such as tag, hide and seek and ‘what time is it Mr Wolf?’ go way back in time and still remain popular today. The same can be said for clapping and singing games, many of which are based on traditional nursery rhymes like ‘pease porridge hot’, ‘oranges and lemons’ and ‘London Bridge is falling down’.

This feature was originally published in Dolls House and Miniature Scene magazine. If you like making miniatures, why not buy yourself a copy of the magazine. Or better still take out a subscription so you never miss an issue. For fans of Facebook and Twitter, or to email, print or comment on the feature, please use the buttons above to share with your friends.
Content continues after advertisements