Delve into the world of excess and join the original French fashionistas by going Rococo in your dolls house with a few glitzy miniature suggestions from Jane Kubiesa...

Known as a field or tent bed, this canopied bed frame got its name from the tent-like structure covering it. The shaped bed roof was draped in light coloured silk fabric and there were sometimes curtains to pull around the sides. These beds were often small and were usually made to accommodate only one sleeper. This version is made by Linda Toerzey of Simply Silk Miniatures. 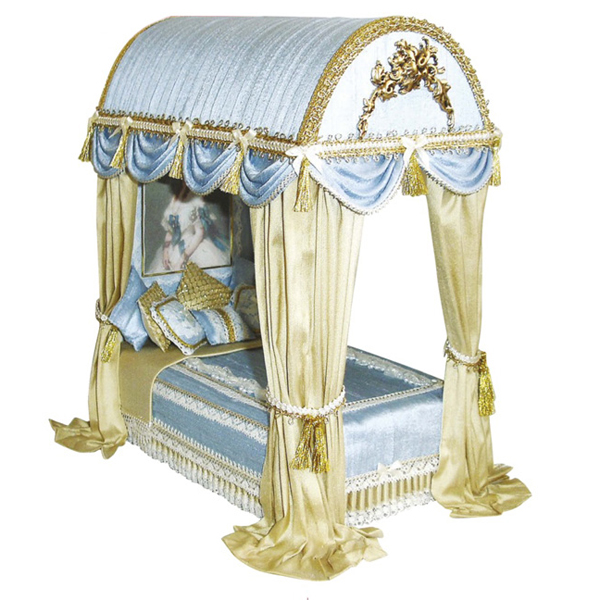 There is some dispute as to whether Rococo style began with interiors with artists like Antoine Watteau, but what is beyond question is that this spry arts movement was all about decoration and paintings were central to that. In keeping with the practice of adding stucco to interior architecture to mirror details on furniture, these paintings had to be framed in Rococo style to match the artwork. These framed paintings are from Literature in Miniature. 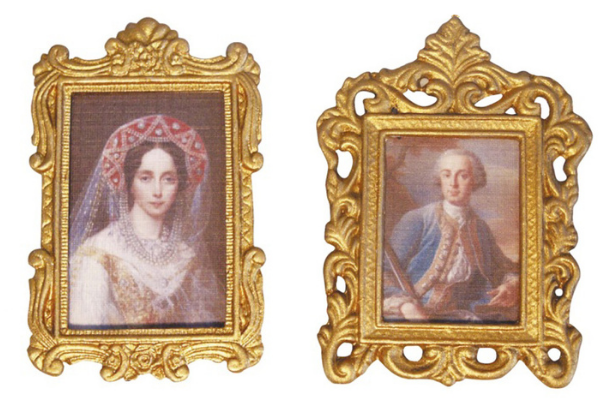 Another art form closely linked to the Rococo was tapestry and Aubusson tapestry was the best available to complement the interiors of the period. This kind of tapestry, made in Aubusson France from wool, was hung on walls in frames to mimic paintings. This is by Doll House Elora.

This feature was originally published in Dolls House and Miniature Scene magazine. If you like reading about stunning miniatures why not buy yourself a copy of the magazine? Or better still, take out a subscription so you never miss another exciting issue!

The girandole was the wall accessory of the Rococo period. Often used in pairs, a girandole was a wall-mounted mirror made from gilt bronze and often attached to a candle by an outstretched arm. The use of a mirror reflected the candle flame and effectively doubled the amount of light given. Artisan John J. Hodgson produced these gilt Rococo mirrors which display the patented asymmetrical style of the period called contraste. 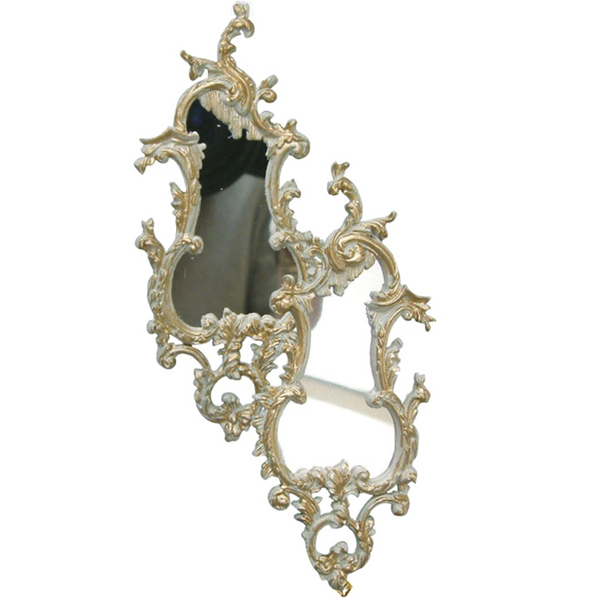 A fauteuil was an armchair common in fashionable salons and during the Rococo period the Louis XV style, in particular, was favoured for its shaped, upholstered back and carvings. A fauteuil tended to have open arms which were upholstered on the top, but could also have upholstered sides and pastel coloured silk was a favourite covering. This chair is made by French furniture specialists Howes of Prieur. 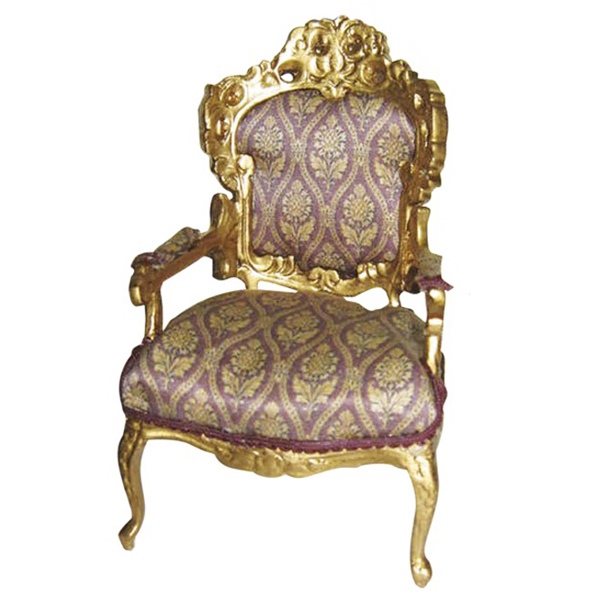 Rococo is an arts movement for guilded and decorated items – combine that with the need for huge numbers of candles to illuminate vast salons for entertaining guests, and the result is the asymmetrical candelabra. When placed on a pier or console table, the candelabra is the perfect height for casting a soft glow onto seated guests. These grape three arm versions are from Jason Getzan.

With its expansive curves and intricate details, if the bombe chest were a car it would be a racing car of its time. Jean-Francois Oeben was one of the leading ebenistes, or cabinetmakers, and his bombe chest was famed and much sought after. This chest is replicated in minature by the show-stopping talents of Mulvaney & Rogers. 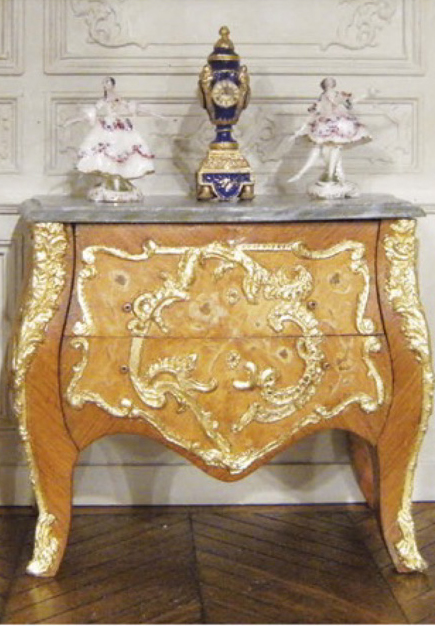 Designed by J.A. Meissonnier, the table d'appartement was the epitome of Rococo style with its elaborately carved legs and integrated stretcher disguised by C-scrolls and floral ornamentation. It was often topped with a similarly carved and guilded mirror resting above its marble surface. This miniature version is recreated by Glynis and Jen at Howes of Prieur. 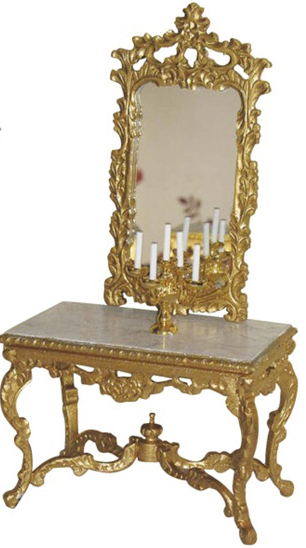 With Rococo's preoccupation with guilding and reflective surfaces it's not surprising that mirrors played a big part in homes, particularly when the only light source was candles. Mirrors were used to make the best possible use of the available light source and a large mirror placed on the wall between windows became known as the pier glass and effectively doubled the amount of light in a room during the day. These mirrors were also placed on pier tables with candlesticks in front to perform the same function during the evening. The mirror photographed above with the table beneath is also by Howes of Prieur.

A canape was often the central item of furniture in a salon. Smaller salons would have one of these low sofas, while larger ones would have several placed in conversation groupings for ease of discussion. A canape would have had an upholstered seat, back and armrests in a light-coloured fabric. Often decorated with a floral design and edged with carved wood. Canapes could also have matching fauteuils to make a suite. This miniature handmade version comes from Dolls House Interior. 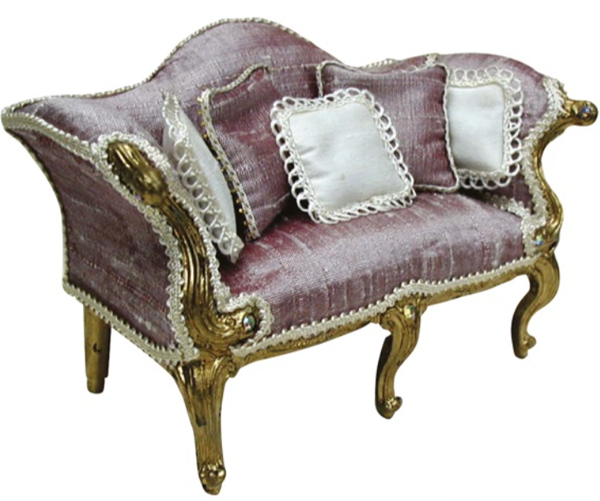 Explore more top must-haves, this time from the Regency period.