Treasured By U - The Cutest Miniature Creatures for your Dolls House Shelley Zimmer creates the cutest miniature creatures. Find out more about her fascination with all things small. ...

Shelley Zimmer's creates are so cute that George the West Highland Terrier is the DHMS office pet!

I have explored many different crafts over the years. In the past, I have dabbled in woodcarving, decoupage, pottery and various other things, but feel that I finally found the right thing for me when I first began making miniatures a few years ago.

I first became fascinated by miniatures after I visited a fantastic place called Furzey Gardens in the New Forest. Furzey gardens has lots of fairy doors that you can spot as you’re walking around the gardens. My two girls (aged 7 and 9) love finding them and putting daisies and buttercups outside the doors for the fairies.

This is what led me to begin making fairy and witch houses using driftwood, and subsequently led me to my first purchase of polymer clay for making gargoyle water features, toadstools and little cats to put in the houses. The houses were very small, less than 1/48th scale I would think.

Once I began sculpting with clay, I realised I had found what I needed to really fulfil my creative desire. I then began making bigger (1/12th scale or more) cats, hedgehogs, trolls and elves. I learnt everything that I needed to know about clay from books and online. I use Fimo, Sculpey and Cernit for most of my sculpting. I have a pasta machine for conditioning the clay and for adding gradients when mixing colours. I have lots of tools but honestly could survive with my main few; needles, blades and basic shaping tools. There are some amazing artists whose work has also inspired me, such as Santani and Dawn Schiller. I get ideas from so many things that I see and hear. My children are a constant reminder of the magic of childhood imagination. I’m lucky in that my studio has a wonderful view of the woods at the bottom of our garden where the fairies often have parties, and the elves come round to play with them too! As adults I think it’s just as important to bring magic and wonder into our lives, which is why I love to create these creatures. The convincing and needy expressions on their little faces show their enchanting world coming to life right there in front of you.

One of my favourite things to make are miniature mice, which range from around 2-4cm tall. They are often wearing clothing which I make from fabric, fibres, clay or other interesting goodies I come across. It’s so much fun because I can put my own imagination into them by using a mixture of realism and fantasy. They can be whatever they choose to be while I’m sculpting them, it’s their decision! An enchanting little Chimney Elf is another cute creature for a dolls house or display cabinet, as they perch on the chimneys, rooftops or shelf edges. They send good luck into the house in which they dwell, making it a happy home! They are clever kind little souls and nothing ever annoys them. They see the good in everything and everyone and they pass on their happy vibes.

My little 1/12th scale teddy bears, and all my other furred sculpts, are furred with either animal friendly fur such as mohair, angora or alpaca which are all removed from the animals without having to cause them any harm, or I use synthetic fur. It very much depends on the creature I’m creating thought, teddies are usually mohair. 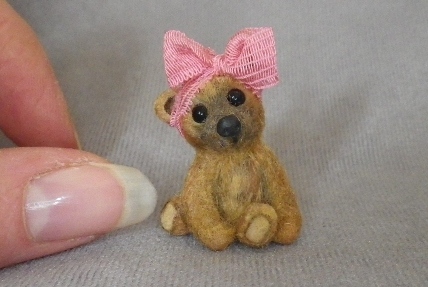 I think the tiny details are what can make something quite special and out of the ordinary, and they need to be perfect. When people look at photos online the size is increased massively, and the tiniest pinhead sized fault, which you probably wouldn’t even be able to see with the naked eye, really stands out!

I always have a good idea of what I want to make before I begin each creature, but they develop their own personalities as I sculpt. For example I may begin by thinking in advance that I’m going to make a sweet little mouse called Angel, but as I sculpt I may decide that it’s actually looking far too cheeky to be an Angel, and instead the correct name for it will usually spring to mind - it can become obvious what their name is meant to be purely from looking at their faces. One thing is always for sure though – every one of them is made with bundles of love and care and a big dose of magic! I think that one of the greatest things about miniatures is that objects can be completely transformed into something totally different from their intended use or from their original state. A couple of well-chosen beads can be made into a witches potion bottle, a dried flower pod into a fairy house light, or a plain old lump of clay can be transformed into pretty much whatever I wish it – or it decides - to be!

If you would like to see more of Shelly's work, please take a look at the following: