It doesn’t take huge pops of colour to deliver big personality. Even if you’re drawn to neutrals, a few hints of a favourite hue will add warmth and pizzazz to what may otherwise be a bland or neutral landscape. When space is at a premium, as it is in many dolls houses, one or two carefully chosen accessories can speak volumes about the residents who live in your mini space. Victoria Fasken’s hand-painted miniatures may be just the ticket!

Victoria’s pewter and white metal dinnerware and household items take a dreary winter day and turn it into full summer. Her French-inspired Quimper pottery designs and her always popular English Canal ware look fabulous in a variety of architectural styles, from simple country cottages to gingerbread Victorians and elegant Edwardian town homes. When so much of today’s tea sets and dinnerware are moulded in plastics, Victoria’s metal ware has the look of fine china and porcelain. 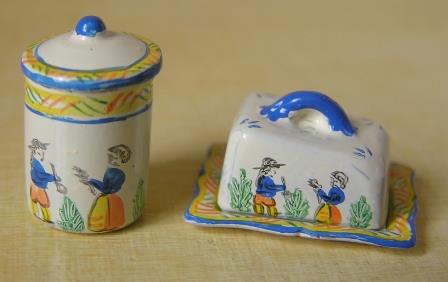 With lots of colour choices and classic designs, Victoria’s work is based upon vintage china she picked up years ago at an antique market. “I’ve always loved going around to auctions and antique markets,” Victoria confesses, “not only in the hopes of finding a bargain but also to soak up designs and ideas.”

Growing up in a small market town in the Peak District, Victoria readily admits she didn’t particularly like school and by sixth form was routinely skipping classes one day a week in order to take a stall at an outdoor flea market in Buxton. It could be a bitterly cold experience in the dead of winter but for her it was far better than sitting inside a stuffy classroom all day. 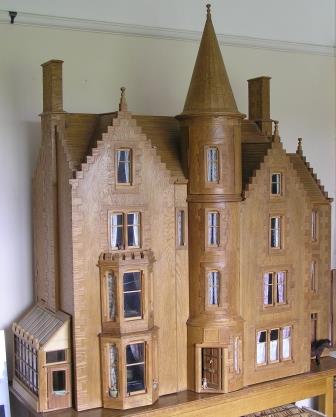 Her mother was a great collector of dolls houses and miniatures and as soon as her daughter was born after having had four boys, her hobby took on new significance. At its peak, their house held over thirty-five dolls houses and at the first sign of boredom, Victoria was promptly told to “go and make something for one of the houses!”

When she was fifteen the two spied an advertisement for a dolls house fair in Manchester and out of curiosity they attended. “What an eye-opener! When we got home and discussed the fair my mother and I both felt that the items we had been making over the years were marketable.” They made a decision that when the next fair was announced, they would take a table. That was thirty years ago and that Nottingham fair would pave the way towards Victoria’s future independence. 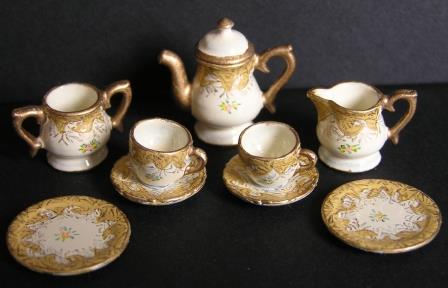 Finding her way, literally and figuratively

Following stints as an au-pair and nanny in Europe, Victoria returned home and went into retail management; firstly with Laura Ashley and then with a tea merchant. There were parts of her jobs she loved but she dreamed of being her own boss. June Astbury, a dear friend of her mothers who collected antique dolls house and was a trained artist painting exquisite miniature tea sets and accessories, encouraged Victoria to have a go.

So while she retailed in Bath during the day, she painted miniatures as a side-line, eventually getting the courage to show her work to Caroline Nevill at Tridias Toy Shop in Bath. When Caroline opened her own miniature shop a few years later, anything new Victoria painted went to the shop straight away where she could always count on Caroline to give her an honest opinion as to its marketability.

In those early years the vast majority of tea sets available to paint were made of plastic. Victoria still cringes each time she looks at those early pieces as they were awkwardly clunky and regardless of what you did to them, they lacked realism. Then Victoria discovered blanks made of pewter and white metal. Reasonably priced and unbreakable, these blanks provided the perfect palette upon which to paint. “Most of my blanks are sourced in the UK, mainly from Phoenix and Warwick, although I will paint anything I come across if I think a design will work well on it.” Using the Humbrol line of enamel paints, Victoria thins it down to just the right consistency and finds it gives a good smooth finish with just the right amount of lustre.

Emulating art forms of the past

Quimper Pottery, pronounced “kem-pair”, has been manufactured in the town of Quimper in Brittany for more than 300 years. Each piece is completely handmade and painstakingly hand-painted, thus making every piece of Quimper ware unique. Victoria’s miniature versions of the French country art form reflect the classical “petit Breton" designs for which the region is so well known. 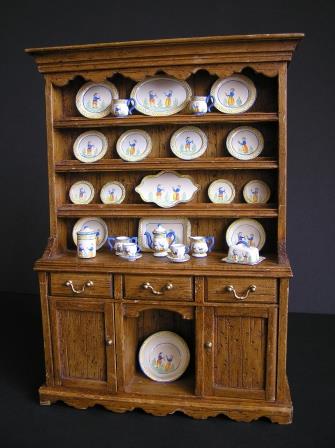 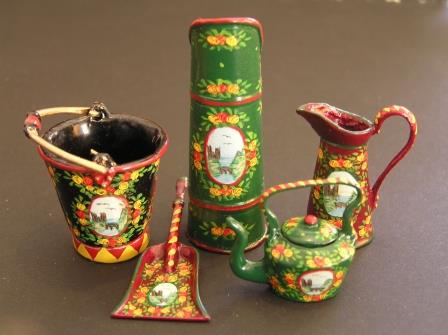 Her strikingly colourful Canal ware is based upon an art form that was used as decoration on the narrow boats of the midlands canals in the 19th century. “The families who lived in cramped conditions on the work boats compensated by painting both the exterior and cabin interior with brightly coloured designs,” Victoria explains. “They also painted their metal ware such as buckets, coal hods, and water cans.”

With highly stylised flowers, castles, and landscapes, Victoria’s own miniature representations are not only whimsical and colourful but reflect great attention to detail achieved with a minimum of brushstrokes.

Victoria attends a dozen shows a year in England and Europe. “When I was painting fulltime, I did 40-50 shows a year but the cost of petrol put a stop to that!” says Victoria regrettably. After a decade of painting miniatures full time, she reluctantly came to the realisation she could not make a living on miniatures alone. Nowadays she combines her miniatures with house and pet sitting, with five regular clients who provide her with just the right amount of work to ensure a steady income and allow her time to paint. Some clients will even try and arrange their holiday schedules around her fair dates.

For the past fifteen years Victoria has lived in a rented cottage on the Stourhead estate in Wiltshire. With no central heat or radiators, Victoria heats her cottage with her kitchen’s ancient solid fuel Rayburn and a small fireplace in the sitting room. The old fashioned metal casements may allow the winds to billow the curtains madly but the views of the surrounding landscape are to die for.

As an outdoorsy girl who enjoys fishing, hunting, and the like, she shares her love of the outdoors with her boyfriend, Richard, who lives in a tied cottage some ten miles away, and with her retired hunting Beagle, Glow-worm, whom the two share.
Victoria’s studio is an upstairs room that overlooks the farm, fields, and, in the distance, Stourhead House. She shares her work space with ‘Allermuir House’, one of her mother’s beloved dolls houses. When her mother passed away earlier this year and Victoria had to decide which of her dolls houses she would keep, Allermuir House was the one house she just couldn’t part with as it was the very first one her mother had commissioned more than thirty years ago. Made of bee waxed oak and elm, for Victoria it has become a member of the family.  Please see the photo of this house at the beginning of the article.

Victoria admits she doesn’t like being tied down maintaining a catalogue or website when she’d rather be painting or roaming the outdoors. She has a web page on the British Miniaturists website that includes photos of her latest work and fair dates where shoppers can find her tables. Karon Cunningham stocks quite a few of her pieces on Karon’s website and, in the USA, Swan House and Small Treasures carry a nice selection of her work.

“I still love doing the fairs after all these years and can’t imagine being able to produce new items without having that vital feedback from my customers. The market is far more competitive nowadays with more traders competing for a shrinking market and fighting against the ever improving range of foreign imports. It’s definitely something you do for the love of the hobby and not for the money.”

You can see Victoria’s work in person at Kensington and Miniatura.
You can also contact her by mail at: Victoria Fasken, 2 Search Farm Cottages, Stourton, Warminster, Wiltshire BA12 6QQ.
Email: [email protected]
Telephone: 01747 840538