Wandering in Fairyland - The Realm of Fairy Castle Wandering in Fairyland - The Realm of Fairy Castle

In her book, titled “Colleen Moore’s Doll House,” Moore wrote, “Perhaps only in that place and time – Hollywood in the twenties – could such a fantasy have been achieved.” ...

Wandering in Fairyland - The Realm of Fairy Castle Images

Colleen Moore was a well-known actress in Hollywood when she began work on her Fairy Castle, an elaborate doll house filled with treasures of minute size. In her Hollywood, dreams were brought to life but their magical sets vanished, dismantled once their creation was complete.

Come to Chicago, Illinois, where you can find a small bit of Hollywood magic still alive and in the possession of the Museum of Science and Industry. Displayed on a large platform, visitors are able to walk completely around the Fairy Castle and listen to an audio description of its contents. Small speakers are attached to the exhibit by cords at varying heights, allowing both adults and children to listen in comfort.

The audio tour, originally the voice of Colleen Moore but now redone, is also one of the beloved features of the Museum as Lindsey McAllister, archivist in the Collections Department of the Museum, related in a personal story. “When I first started working at the Museum a friend of mine was all excited because,” McAllister laughed, “... she managed to memorise the entire audio tour.”

Many of the artefacts contained within its rooms are rare and unique. Some are one-of-a-kind gifts given to Colleen Moore by colleagues, friends, family, and in some cases, complete strangers. According to her book, Moore took the castle on tour during the 1930s for the benefit of children’s charities.

This tour led to an incredible gift to her Castle. In the bedroom of the Prince is an extraordinary painting of the Virgin of Guadalupe. Painted by a well-known Mexican artist, Ramos Martinez, the story of this painting is part of the history of the Fairy Castle. Moore wrote, “Martinez’s young daughter was stricken with polio and doomed never to walk.” After a visit to the Shrine of Guadalupe, Martinez vowed, should his daughter recover, “he would honour the Virgin at every opportunity through his art.”  When his daughter recovered both her health as well as her mobility, he kept his vow. Upon hearing Moore would travel with the Castle on a tour for the benefit of children’s charities, Martinez “asked to be permitted to paint a portrait of the Virgin for the castle,” wrote Moore.

Colleen Moore’s autograph book is also part of the collection. However, it is not on daily display. “We bring it out on special occasions,” explained McAllister, due to the fragility of the piece. In addition to the autograph book, Moore also created a collection of miniature books. “... It is amazing,” said McAllister, “the breadth of people that she had involved.” The miniature book collection was designed for the library room and includes minuscule autographed books, “Tarzan Junior” written by author Edgar Rice Burroughs, and even a cookbook written by Julia Child. “It’s ... interesting to see how some people really try to write in miniature,” commented McAllister,” and others are just kind of writing as small as they can.” 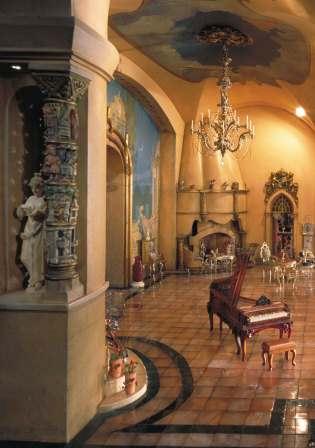 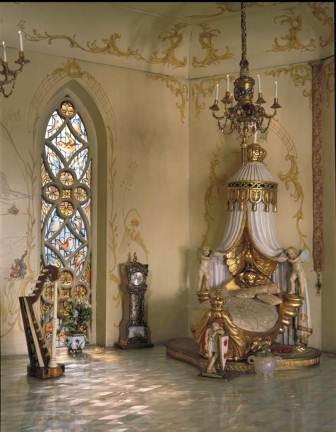 The Castle’s artefacts also touch early twentieth century history.  Moore wrote about her trip across the Channel in 1938. Traveling from Paris to London, she encountered Lord Halifax. She requested his autograph for her autograph book. He obliged but Moore noted, “He gave me a melancholy smile.” Once he completed his signature he said with a sign of infinite weariness and a sad smile, “Tomorrow this may be a very bad name for your book.” Their encounter occurred upon his return from Germany with the Prime Minister, Neville Chamberlain. “They had just signed the Munich Pact”

The Chapel contains a tiny stained glass screen. During the World War II London Blitz, Moore’s friend Judy Keele was walking past Lambeth Palace after a raid. There she spied a small piece of glass. Moore wrote, “The odd shape of glass impelled her to pick it up.” Her friend brought the tiny shard back and “asked me if I could find a place for it in the castle.”

Traveling to the kitchen, there are replicas from the British Royal family. On the table is an “exact replica of the service made for the fabled Queen Mary’s doll house, in Windsor Castle” wrote Moore. “The Queen’s crest appears on the rim of the tiny plates.” 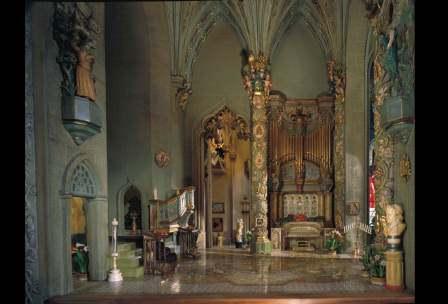 For all its tiny artefacts and extraordinary design, the Castle does require regular maintenance and minor housekeeping.  “Maintaining the Castle is a labour of love,” said Mike Cowan, the Senior Preparator for the Museum of Science and Industry and keeper of the Castle. He checks the distilled water used in the Fairy Castle’s plumbing, as well as the lighting and the humidity, daily. He even changes the tiny light bulbs found in the Castle. Yes, that’s right. Indoor plumbing and lighting are available for this building’s imaginary inhabitants. Considering at the time of its creation most Americans did not have these luxuries, these are pretty amazing features. Having the running water creates some problems for the exhibit, since humidity could damage the Castle as well as the artefacts inside it.

In October 2004, the Museum undertook a conservation assessment project. During this project, the Castle was completely dismantled and all artefacts were catalogued. This painstaking work provided some fascinating moments for the staff. Many of the designs on the Castle itself and the artefacts are not able to be appreciated from a distance. The lighting is also too low to see some of the details. “We’ve had to lower the lighting over the years,” said McAllister, “... because of artefact condition and museum condition issues.” However, during the assessment, they were able to put more light on some areas.

“Even when you know exactly what you are looking at,” said McAllister, “it’s still kind of hard to believe” the intricacy and quality of the work. It’s that minute attention to detail that makes the bedroom of the Princess one of Cowan’s favourite areas. The tiny objects made for the Princess’ personal use are exquisitely crafted with intricate designs. “The detail is just unbelievable,” said Cowan. Moore noted that a Boston jewellery designer, Guglielmo Cini, had a hand in many of these pieces. She wrote a story of his search for bristles for the tiny brush. The brush is made of platinum with diamonds encrusted on the handles. He had trouble, however, in finding bristles that would work for such a tiny brush.  “He observed the fine white hairs in his wife’s silver-fox scarf,” Moore wrote. After telling his wife not to move “he clipped the white guard hairs at the edge of the fur.” These hairs are now in the tiny brush. “Collectors are a generous breed. They are always looking for a good home for an unneeded piece they own,” Moore noted regarding the collectors she met. One of the pieces she received in this fashion is the miniature Bristol cream jug and sugar bowl and involved a collector that Moore referred to as “a Philadelphia lady.” “When I offered to pay for them, she was insulted,” wrote Moore. According to Moore, this stranger explained, “I have been looking for a home for them for years.”

Interspersed among all the pomp of the Castle with its jewels and historical artefacts, you can find Moore’s childhood and heart. “The purple wineglass on the table” in the kitchen “is the sole surviving memento of my first doll house,” noted Moore. The doll house was a gift from her parents when she was two years old; the beginning of a life-long love of doll houses. The Fairy Castle is Moore’s eighth and most elaborate doll house.

The courtyard of the Castle contains a tiny cradle in a treetop, from the childhood nursery rhyme of “Rockabye Baby.” Like many of the other pieces, it also has a story. Made from pearls given to Moore by her Irish grandmother, her grandmother told her, “It’ll be my tombstone. More people will visit it than my grave,” Moore wrote. 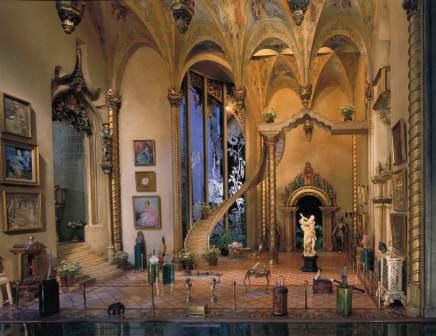 Many people, known and unknown offered their time, skills and treasures to the creation of the castle. “...When I look at them I see not only the faces” of her family, wrote Moore, “...but also the rapt faces of strangers.” Indeed, once you have seen the castle, you no longer feel like a stranger. The Fairy Castle inspires the public’s imagination. “We’ve been asked whether people have seen fairies in there,” she said. As of today, there have been no sightings.

The Fairy Castle has become a cherished icon to those who enter the Museum’s halls. Young and old alike seek its magic. McAllister noted that when you go anywhere in the Museum, “The kids are running around looking for the Fairy Castle.” “Everyone just kind of flocks to it,” commented McAllister, “It’s ... one of the Mecca points.” While no fairies maybe have been spotted, yet, the Fairy Castle does have a mysterious image to uphold. “I am the only Museum employee allowed inside the Castle alone,” said Cowan. “All others have to be accompanied by myself or the collection department director.” Thus, Cowan would be the person to know of any strange goings on within these tiny walls. “Items get moved around on a regular basis. They don’t move from room to room - they shift from place to place!”

He noted some of the more common occurrences. “The Music room instruments and books get moved,” he said.The library is another place of unusual activity. “Books, dominoes, and chairs move around in the library,” said Cowan. While some may wonder if these are the fairies of Fairy Castle, Cowan likes to think its creator has a hand in these events. These unexplained happenings “make me wonder if Colleen Moore is still playing with her Fairy Castle,” he said.

Museum of Science and Industry

The work involved over 700 people.

It took seven years to complete

On loan to the Museum of Science and Industry from 1949-1976, it was officially handed over by Colleen Moore to the Museum in 1976.