10 of the Best - Miniature Dolls House Cookers Images
1. …for a fitted kitchen

Built-in appliances are hugely popular in today’s fitted kitchens and everything from the microwave to the refrigerator can be purchased as a fully integrated option when designing a full-sized kitchen. Designers of miniature kitchens now also have the opportunity to have an integrated appliance thanks to The Dolls House Emporium’s oven and hob unit. The unit features a fitted hob and integrated oven set into a double base unit cupboard. The cupboard has a light wood finish, two doors and a drawer.
The Dolls House Emporium
Price: £22.90
www.dollshouse.com

2. …for the Anglo-Saxon home 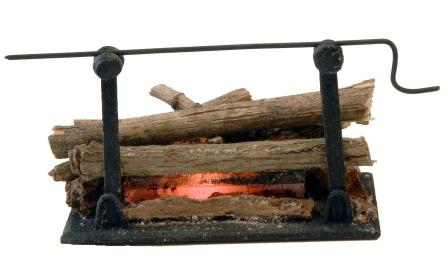 Until relatively recently the fire was the most important element of the home. It was used for cooking, heating and as a source of light. During Anglo-Saxon times, and up until the early seventeenth century, the fire would have been little more than a burning pile of logs or peat set on a large flat stone in the centre of a one-room home. People would sleep around the fire, sit around it to eat and carry out work by its light after dark. Larger or wealthier households would have had a chimney above their cooking fire, but most homes let the smoke from the fire drift around the room or out through a door. Herdwick Landscapes’ Hearthstone Fire with Fire Dogs is the ideal 1/24th or 1/12th scale addition to an early home. The lit fire comes with fire dogs to keep the fuel in place and a spit for roasting meat. Versions with either logs or peat are available and they even feature real ash for a realistic finish. The fires come in two scales but can also be made to measure.
Herdwick Landscapes
Price: 1/24th £12.95, 1/12th £16.95
www.herdwicklandscapes.co.uk 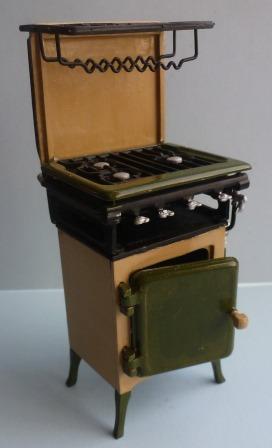 The kitchen of the 1940s was a wonderful place. For the first time it could be filled with fitted cupboards and time-saving gadgets to help the housewife carry out her duties with much more ease than ever before. Alongside the patterned linoleum, the two-tone decorating scheme and the enamel-fronted refrigerator was the gas cooker. This technological marvel could be used for cooking, baking and grilling and it even kept plates warm, ready for serving. The miniature version from Country Contrast showcases 1940s style and is complete with three gas burners, an oven, a plate warming rack and even pipework as featured in period models at the time. This miniature is made from a Phoenix metal kit and hand-painted in the fashionable two-tone style. It has an opening oven door and a separate grill pan and could be used in 1/12th scale kitchens set from the 1930s to the 1950s. Country Contrast also have a matching range of enamelware made up of more than 30 pieces to make your miniature neighbours green with envy.
Country Contrast
Price: £47.50
www.countrycontrast.co.uk

The range cooker is at the forefront of contemporary kitchen design. It is versatile enough to allow for different hob configurations, comes in several forms to suit your culinary needs and is available in many different colours to match or contrast with your kitchen colour scheme. This is true for the owners of both full scale and 1/12th scale properties. The 1/12th homeowner need look no further than ELF Miniatures and their handmade selection of range cookers. They can be supplied ready-made or in kit form and are available in 12 colours including purple and orange. The kits have two ovens and two drawers plus four burners and a griddle which can be arranged to your liking. Ranges can be purchased singly or as part of a custom-designed fitted kitchen made especially for your home.
ELF Miniatures
Price: kit £17.50, complete from £50
www.elfminiatures.co.uk 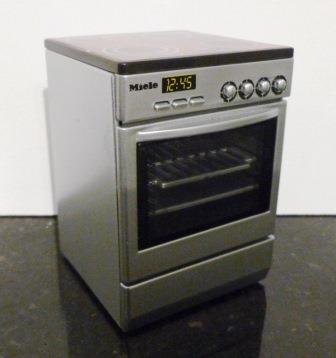 Just as a real electric cooker hob lights up when turned on, so does the 1/12th scale Miele Cooker stocked by Bijou. This miniature is a replica of a full-sized Miele oven and when the hob is turned on, not only do the four burners light up but the cooker also produces sounds of cooking for a realistic kitchen feel. Similarly, when the oven is turned on it lights up and makes fan oven sounds. The oven door opens and just like a real oven, the shelves can be removed for cleaning. This model is battery operated and is stocked in the Bijou shop alongside the Miele dishwasher and washing machine, which also have sound and light features.
Bijou
Price: £11
www.minibijou.com 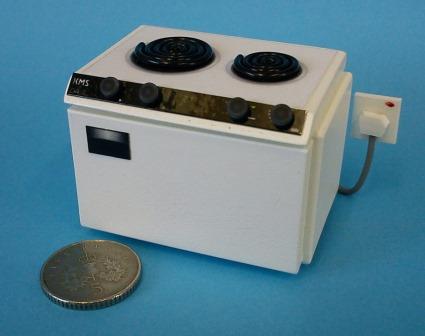 The small size of this 1/12th scale item means that it can find a home in many a miniature setting. From a bedsit to a student apartment, from an office canteen to the first home of newlyweds, this table top cooker can turn the corner of any room into a kitchen area. Its portability means that it would also be at home in a mini holiday cottage, beach hut or caravan. This Baby Electric Cooker is made by Delph Miniatures and features two hot-plates, a non-opening oven and a plug and cord.
Delph Miniatures
Price: £11.68
www.delphminiatures.co.uk 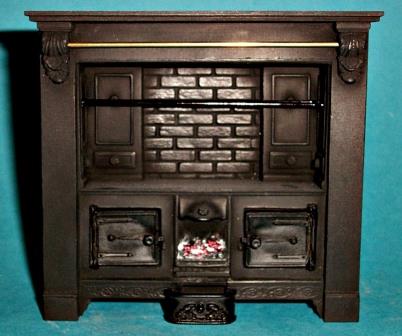 Mrs Beeton was the Victorian author of Mrs Beeton’s Book of Household Management, a guide for middle-class ladies. It included tips on dealing with servants, fashion and home decoration, but it is most widely remembered for its recipes, which included jugged hare and carrot jam. As well as offering advice on recipes, Mrs Beeton also extolled the virtues of the new closed stove, the very latest range on sale. Now miniature Victorian abodes can own this coveted kitchen essential. The built-in kitchen range from artisan makers Hearth and Home carries the sought-after hot plate closed stove detail, two roaster ovens with opening doors and a pot rack. The fire is lit so it’s time to cook those Mrs Beeton classics like curried fowl and almond soup.
Hearth and Home
Price: £60
www.hearthandhomeminiatures.com 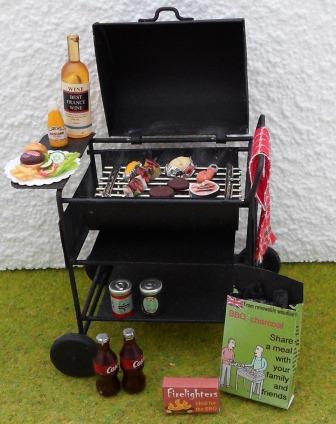 No modern summer scene would be complete without a barbecue grill filled with yummy treats for outdoor dining. This Complete BBQ Set is put together by dolls house garden centre In Miniature and it comprises of a metal barbecue on wheels with a removable grill and hot coals, an opening smoker lid and a tea towel. It also has two handy shelves. To this stock item, In Miniature add a box of charcoal, a replica box of firelighters, a selection of miniature food on the grill and a prepared hamburger. This is ideal for a dolls house patio or a garden setting and a bulb could easily be added to create the illusion of a lit barbecue.
In Miniature
Price: £11.25
www.in-miniature.com 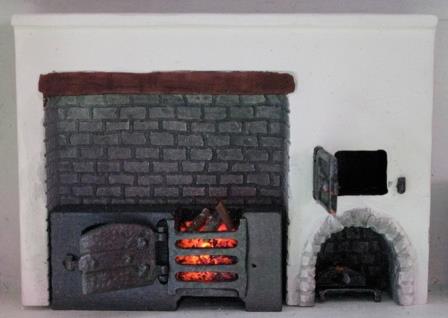 During Tudor times bread would have been eaten at every meal and it was usually accompanied by meat. The poorest people would have eaten dark coloured bread made from rye and barley, while the richest would have had refined white bread made from wheat and there were many variations in between. As bread was so important, dedicated bread ovens were often found in homes of the period. In true Tudor style, Tony Hooper Miniatures make lit scale ranges complete with bread ovens. They come in 1/12th and 1/24th scales and there is also a range of metal utensils, kettles and pots to accompany them.
Tony Hooper Miniatures
Prices from: £50
www.tonyhooperminiatures.co.uk 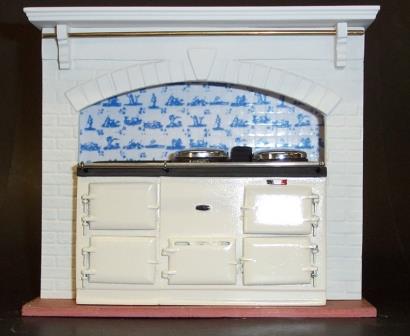 The pedigree of the aga is undeniable. It has been a popular staple in kitchens across the world from the 1920s to the present day and it makes a welcome addition to 1/12th scale kitchens of many periods. It was initially popular for use in large country houses due to its versatility - it can cook, bake, dry laundry and heat a room at the same time, but today is on the wish list of many homeowners even though its appearance has changed little since it was invented almost a hundred years ago. Miniature aga maker Hearth and Home have a whole range of agas to choose from with lifting chromed lids, two oven and four oven models, deluxe models with lit fireboxes and ones complete with brick fire surrounds. They come in the original cream colour; in light blue and white as introduced in the 1950s, 1960s additions of dark blue, black and red, and in contemporary burgundy and purple.
Hearth and Home
Price: £60- £125
www.hearthandhomeminiatures.com

As with most web addresses, you will have to copy and paste these into your internet browser.

For suppliers, please take a look at the directory section of this website.