How to make a miniature beach scene Jane Kubiesa brings music to the ears with the best miniature musical instruments for the dolls house... 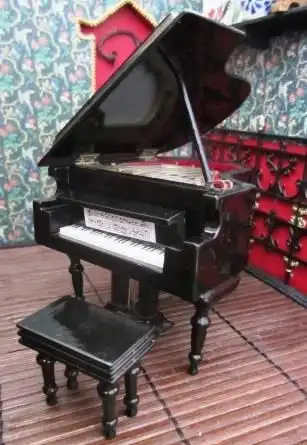 Bringing realism into the dolls house with authentic miniatures has now moved one step closer with this little grand piano by MusicBoxesEtc. Not only does this black piano, complete with lift up lids, foot pedals and matching stool, look the part for a concert but it also has sound for a realistic piano feeling. This baby grand piano music box plays traditional English folksong Greensleeves when wound, or can be customised with one of 300 other songs, which include classical music, show tunes and popular hits. The piano also boasts internal detailing including strings and metal pins for extra realism.

2. ...to introduce the sound of America 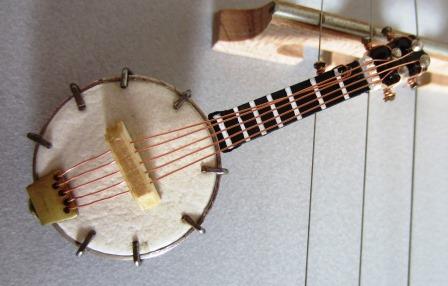 The piano was the instrument of choice for young people to learn during the Victorian period. Most well-to-do homes had a piano and the ability to play a musical instrument well showed accomplishment, but also helped to attract members of the opposite sex during courtships. However, with influence from the States beginning to rear its head in music from the period, the banjo became an unlikely replacement for the piano in terms of learning an instrument. It was particularly popular with girls and its portability lent itself to calling on friends and relatives for impromptu performances. This delicate 1/12th scale banjo from Switzerland by Heidi Ott Dolls & Miniatures has peg, fret and string detailing, a wooden bridge and just like a life-size banjo it features the characteristic metal brackets around the head. As an extra design feature it also has polished two-tone woodwork.

Beatlemania comes to the small scale in the form of a series of miniature guitars devoted to the Fab Four. These guitars by Rock Guitar Miniatures, which are 1/4th scale, come either as replicas of the actual guitars owned by members of the band at various points in their careers, or in the form of small scale instruments inspired by The Beatles’ music. Amongst the guitars on offer are acoustic and electric varieties and these include John Lennon’s famous Give Peace A Chance guitar, Paul McCartney’s recognisable Höfner violin bass and George Harrison’s 12-string Rickenbacker. Rock Guitar Miniatures stocks more than 300 mini guitars and also has a non-working amp in the same scale. Each model comes with a stand and guitar strap.

This feature was originally published in Dolls House and Miniature Scene magazine. If you like making miniatures, why not buy yourself a copy of the magazine? Or better still take out a subscription so you never miss an issue! 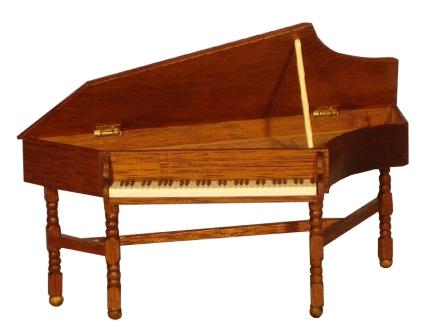 The time of William Shakespeare and Isaac Newton was a time of plenty for the wealthy who enjoyed expensive imports from far afield such as coffee and sugar. However, the taste for luxury goods did not stop at food and drinks; the spinet – thought to originate in Italy – was a much sought-after toy for the ultra-rich. The forerunner of the piano, this instrument was created by European artisans. Miniature artisans Gary and Heidi Masters of Masters Miniatures have created an equally sought-after spinet, which comes in 1/12th, 1/16th and 1/24th scales. This scale bentside spinet, named because of its curved right side, has string and peg detailing, a lift up lid and handmade keys. Just like the real thing, no seat is included as the player would have stood up to use the spinet. 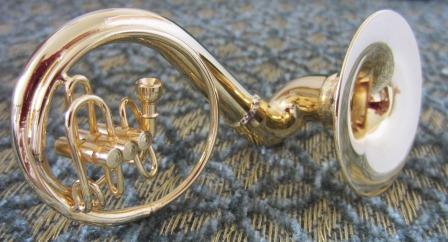 The sousaphone, a kind of tuba, is designed to wrap around the body to make it easier to carry when marching or when used in street music. This brass instrument was created in America in the 1890s by composer John Philip Sousa and it differed from the existing models as it sounded mellower. Since that time sousaphones have found their way into marching bands, military parades, jazz and even into Indian and Chinese music, so their uses in miniature settings are only limited by the imagination. The mini Sousaphone comes courtesy of the workshops of Heidi Ott Dolls & Miniatures. This scale metal miniature has non-working valves and a shaped mouthpiece. 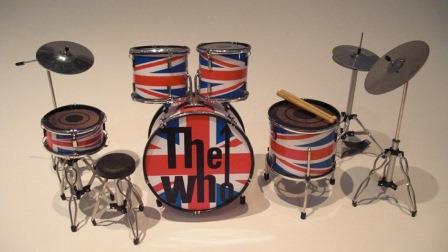 One of the most imposing instruments in any rock band from sheer size alone must be the drum kit. Drums provide the backbone to any music track and the rhythm they provide acts as a base to build the other sounds upon. But much more than this, drum kits are so often customised both to the user’s preferences in terms of which drums or percussion elements will be added and in terms of the actual design, so drums give a characteristic look to any group. The colours used around the drums can vary greatly, while the bass drum often carries a band’s name or artwork. With this in mind, Rock Guitar Miniatures stocks more than 30 mini drum kits dedicated to some of the greatest rock bands of all time. From Led Zeppelin, The Who and Queen to Oasis, Metallica and Deep Purple, all of the greats can be found in 1/4th scale. 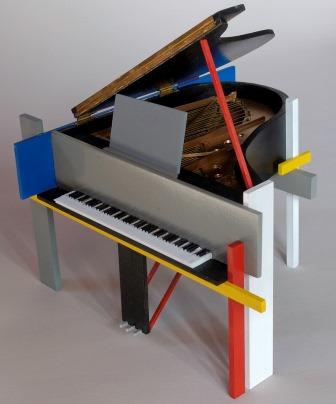 In 2002 architect Alexander Gorlin won an international competition to redesign the piano and this is the result. It was praised for its use of colour, imaginative use of form and function and its reference to works by Dutch painter Mondrian. Miniature artisan Peter Tucker, a.k.a. Room Boxes, felt the same way about the award-winning design, this time likening it to the work of one of his favourite furniture designers, Dutch architect Gerrit Rietveld. “Gorlin doesn’t mention Rietveld as an influence, but to me the link is clear,” Peter explains. So he set about recreating the design in 1/12th scale. This limited production item can be made to order and comes with a matching piano bench. It could grace any chic contemporary miniature home or sit perfectly in a small scale art gallery. 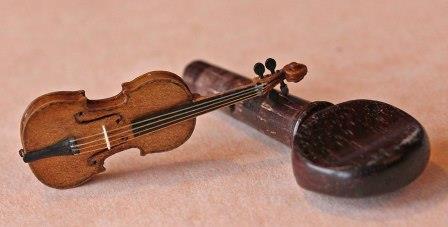 Stradivarius violins, made by the Stradivarius family during the 1600s and 1700s, are thought to be the best violins ever made and are still highly sought after today. They hold such sway for musicians that professional cellist David Edwards, who has played with the Scottish National Orchestra, exchanged his bow for a craft saw to create intricate 1/12th scale violins in the style of Stradivarius. Each violin takes months to complete. David has invented a special varnish which takes two weeks to dry to make his miniatures look as like the originals as possible and each model is even strung with real sheep gut just like the real things. David’s musical passion has even stretched to creating four kinds of scale recorder for the ardent miniature music lover. 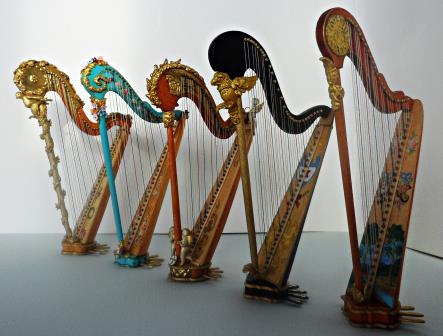 Miniature harp maker Helen Archoleka has a passion for eighteenth and nineteenth-century harps. Her inspiration for her one-of-a-kind miniatures comes from real-life harps made by the likes of Jean H. Naderman, who supplied harps to Queen Marie-Antoinette, and Sebastian Renault, whose carved and gilded work particularly appeals to her. Helen combines aspects of her favourite designs to create unique miniatures, which she says quickly take on a life of their own. Each stringed harp is meticulously painted, with gilding and carving and could add a finishing flourish to a period salon or music room.
[email protected] 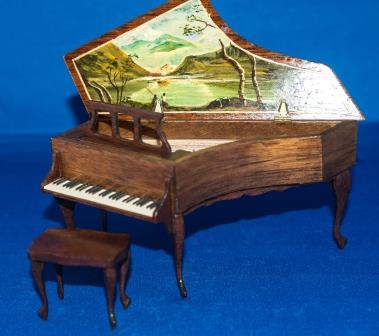 Originally Baroque music would have been played on a harpsichord, an instrument which produced sound by means of a key plucking a taut string. Harpsichords came in many forms, including the virginal, spinet and ottavino. Baroque, which was originally a term for a specific kind of music and was then used to refer to period design, was a lavish sound and contained elaborate musical techniques. The same elaborate detailing is shared in the construction and decoration of the harpsichord. These musical instruments were finely painted and often contained a landscape or portrait painting under the lid. In true period style, celebrated miniature piano maker Ralph Partelow’s tiny replica from Lovely Things – Childhood Memories has a small landscape painting hidden inside. It also has string detailing, shaped legs, a music stand and comes with a matching stool.

Next, meet Melissa Piombo and her spectacular miniature vinyl record collection! Or learn a variety of useful dolls house techniques in our A-Z miniatures series...