A brief history of the Welsh dresser Learn about the history of the Welsh dresser as Moi Ali explains their origin, how their uses have changed over time and why the term ‘Welsh’ dresser is a bit of a misnomer...

What is a Welsh dresser?

Dating back to the 1600s, the Welsh dresser (or china hutch to our American readers) is a traditional piece of kitchen furniture. Originally made from oak, but later from any type of wood, the typical dresser comprises a sideboard-type bottom with cupboards and drawers topped with open shelving.

Although known as Welsh dressers, they weren’t unique to Wales. Irish dressers were also common. Dressers from different geographic areas were adapted to local needs. The Scottish Highland dresser, for example, had a porridge drawer — a tin-lined drawer into which hot porridge was poured and left to set. When cold, slices could be cut and taken out by crofters working out on the land. Delicious!

What were dressers originally used for?

At first, the dresser was utilitarian, designed for storing food (in the cupboards and drawers) and food preparation on its sizeable work surface – a kind of early kitchen unit! Dressers were generally only found in wealthier homes, such as manor houses.

Enjoying this? Delve into the wonderful world of miniatures with Dolls House & Miniature Scene magazine – buy yourself a copy of the magazine, or better still take out a subscription so you never miss an issue!

Later the dresser took on a decorative use too, with the open shelving providing an excellent space for not only storing but also displaying pretty crockery and pewter-ware. By the mid-18th century, they began to appear in more humble homes. 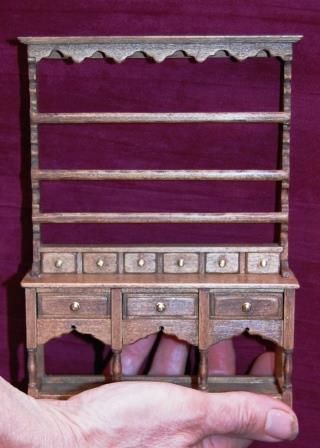 The more decorative the dresser became, the more likely it was to be found not in the kitchen as a utilitarian object, but in the dining room as a focal point and display surface for best china – in the countryside, that is! Affluent city-dwellers regarded the dresser as a piece of furniture that was strictly for ‘below stairs’ but cosy country cottages were quite likely to place their dresser in pride of place.

What about dressers today?

Even today, the dresser is a much-desired item of furniture, with originals selling for thousands of pounds and reproductions popular and more affordable. Although the style of dressers changed little for nearly 300 years, and generally reflected the style of the local area, by the 19th century, with its proliferation of styles, there were arts and crafts dressers, Gothic Revival styles and dressers influenced by the Art Nouveau movement.

Where to buy miniature dressers

Miniature dressers are also much in vogue in dolls houses across the land. For an authentic miniature version, try Pear Tree Miniatures, based in Wales. Their ‘Cwpwrdd tridarn’ shown above is a 17th century design unique to North Wales.  Other North Wales dressers produced by Pear Tree include the Meirionydd, the Conwy and the Ynys Môn – each bearing its own unique and distinctive differences. An extensive range of mid and South Wales dressers are also available, such as the Powys and the Glamorgan.

Next, test your skills and learn how to ‘decoupage’ a miniature dresser for your dolls house or go back in time and learn about the history of the sideboard.