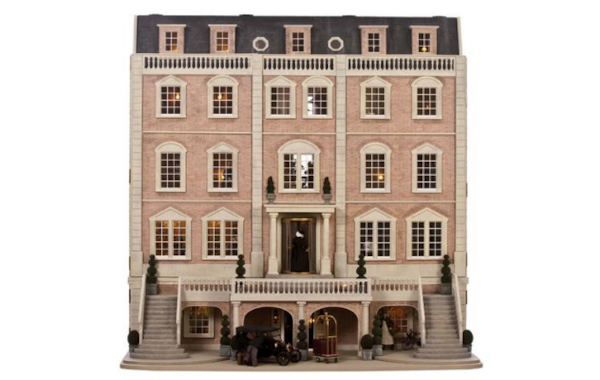 Step into Featherstone Hall Hotel, a Georgian mansion, for the first part in our series giving you a guided tour before the rest of the series takes you through the creation of the miniature hotel from flat-pack to finished project.

Created by Julie Jackson of Dee-Daw Designs, Featherstone Hall Hotel is a Georgian mansion converted from the Cottesmore by Barbara's Mouldings, into a country house hotel in the pre-First World War Edwardian era.

This is the first dolls house Julie built and this series follows the creation of the miniature hotel from flat-pack to finished project. The features include the ups and downs and all the disasters and classic beginners’ mistakes. Julie will also be showing us how to create some of the special items in the rooms with mini projects. But first, let's start with a tour... 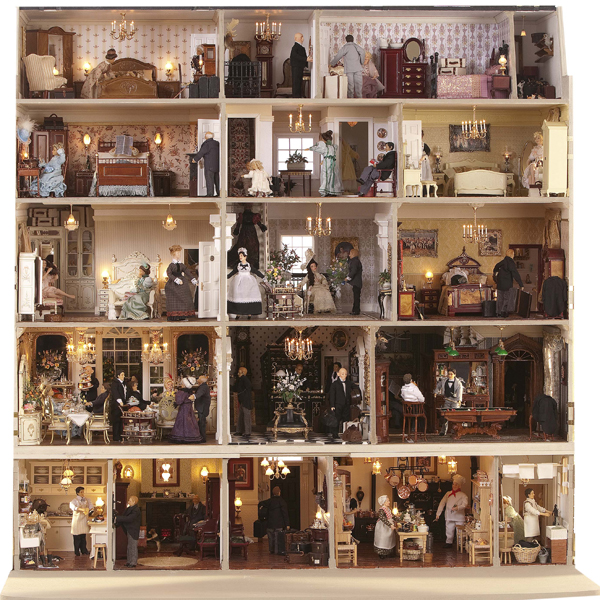 The hotel has over 50 people and each room has a story to tell. Outside, James the footman is unloading luggage from the 1913 Model T Ford. 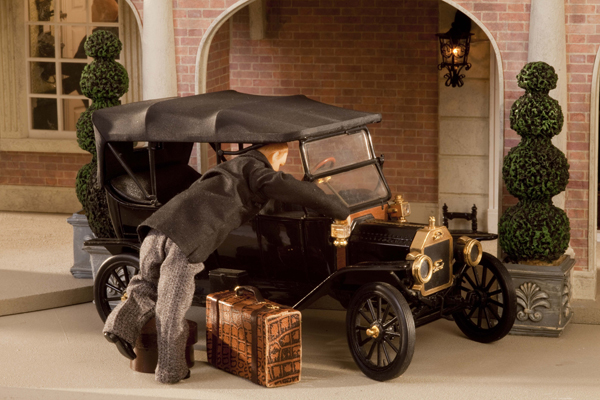 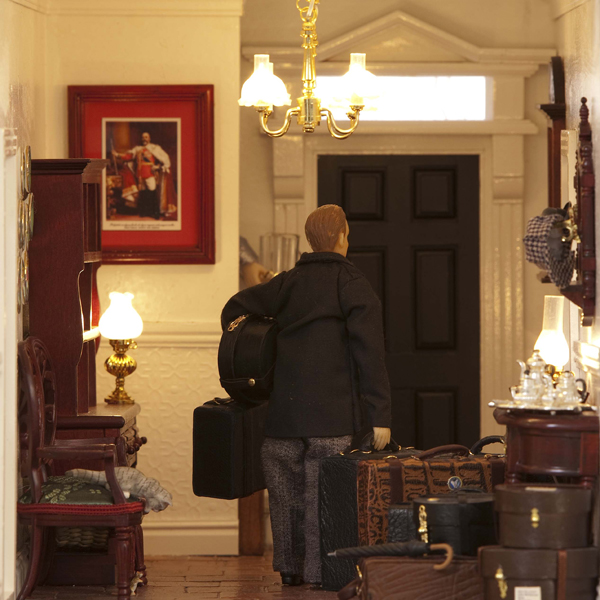 As guests enter, Mr Fairfax the hotel manager comes out of his office behind reception to check that Charles Clarke has remembered to give dinner reservations to Oscal Delgado the Maître d’hôtel. 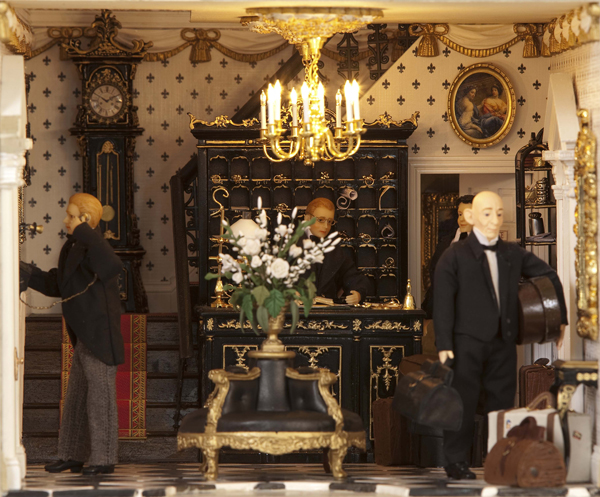 Parker, the porter has brought down some guests' luggage. Edward Black is telephoning the kitchen to order light refreshments for the gents playing snooker in the library. 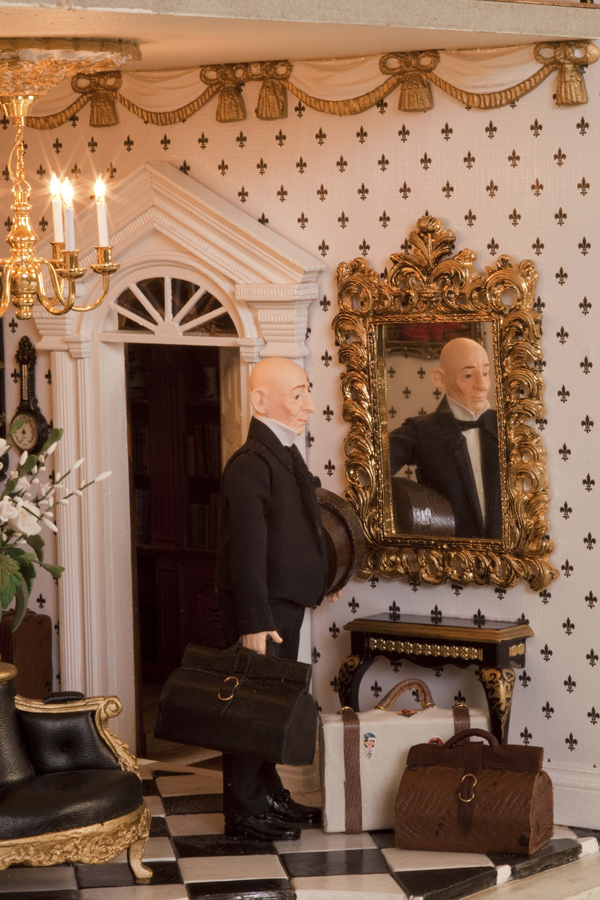 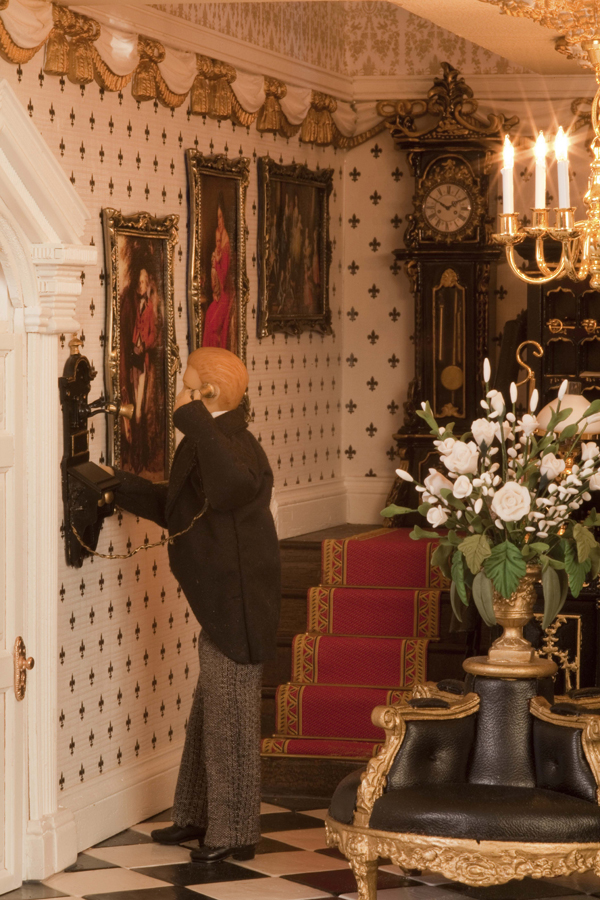 In the dining room George and Gloria Makepeace have just entered and are greeted by Lady Elizabeth Harvey-Jones and party who are in the middle of dinner. 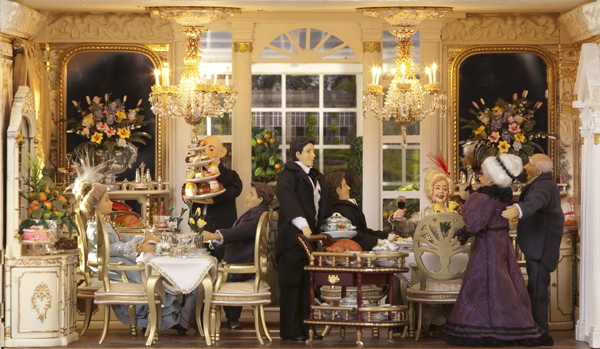 American heiress Sylvia Beaumont is dining with her beau David Smythe, older than her partner, but her huge diamond collection has a certain attraction for this impoverished young gentleman. 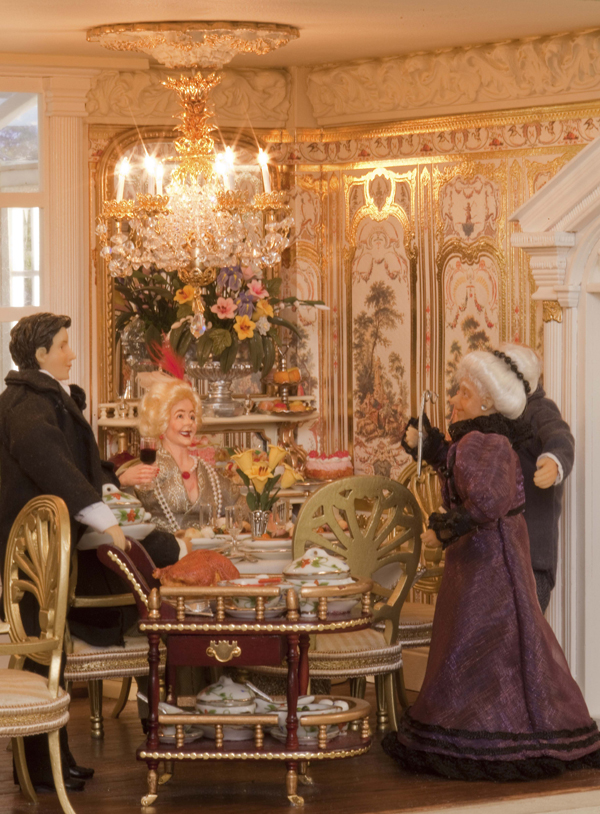 Through to the conservatory where musicians are playing amongst the palms and orange trees. 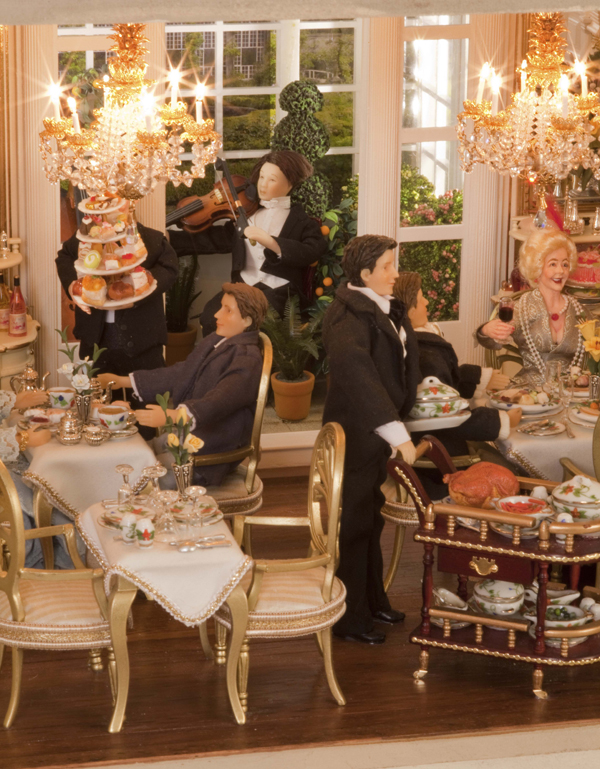 In the library and snooker room the Honourable George Gardiner snoozes behind his paper, and two gents are playing snooker whilst discussing the next day's shooting. 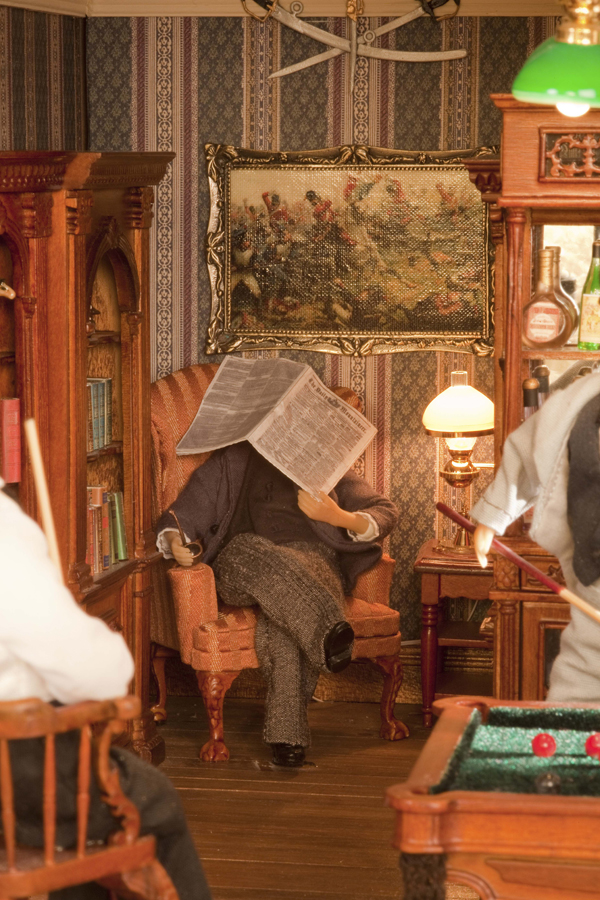 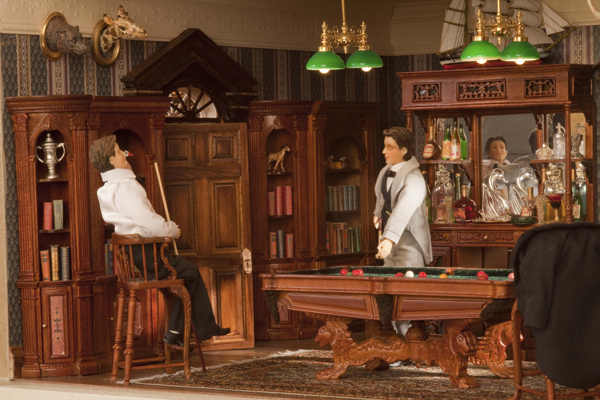 The lavish staircase is bedecked with portraits of the Featherstone family. Here Lady Nancy Saville is receiving Sir Michael Fosdyke bearing a bouquet of beautiful flowers, whilst Elsie the maid is removing a tea trolley from the Duchess' suite. 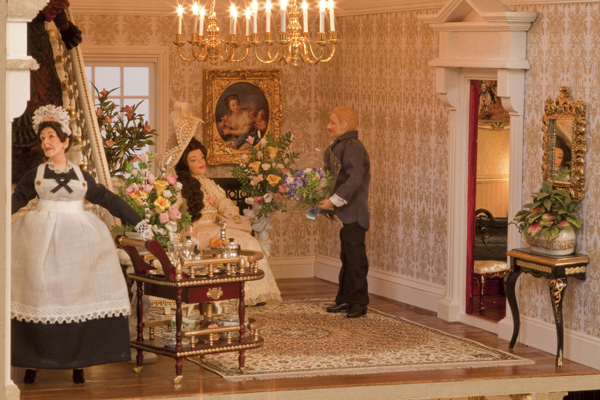 In the suite, the Honourable Sarah Hookesmead sits brushing her hair whilst her friend Elspeth Grey listens to the latest gossip. 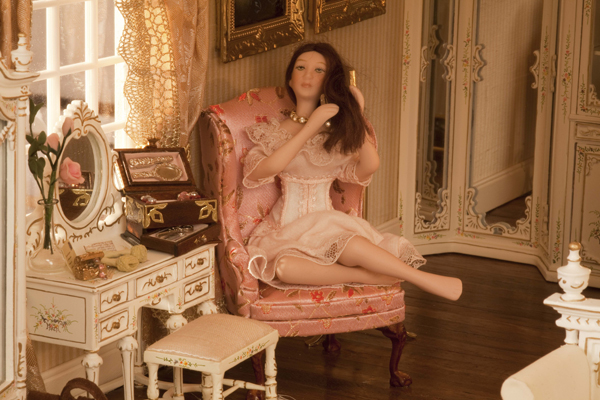 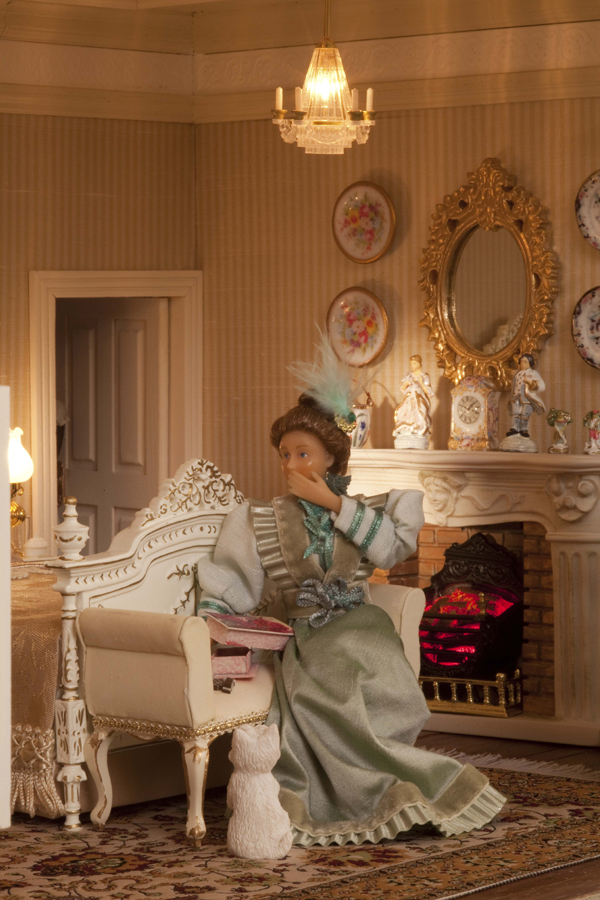 Love exploring history in miniature form? Dolls House & Miniature Scene magazine is packed with projects to inspire from a wide range of eras – there’s something for all tastes and interests!

In the Duke’s Suite opposite, Marcus Fortescue has just arrived and Pemberley, his valet, is unpacking. 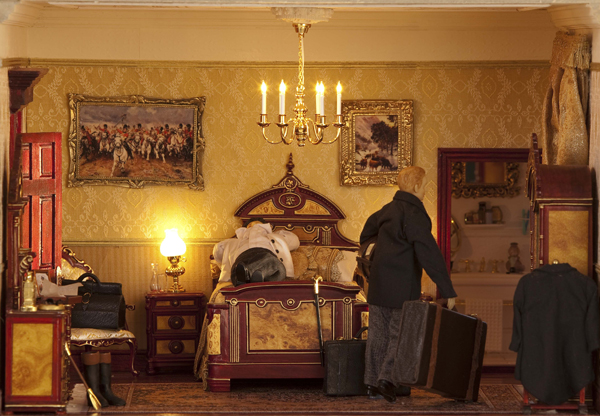 The first-floor rooms are not en-suite, and the bathroom is about to be vacated by Mrs Ainsworthy who steps into a chaotic scene. At the end of the corridor Bertie is cocking his leg on a demilune table while his owner Mary chases him down the hall. 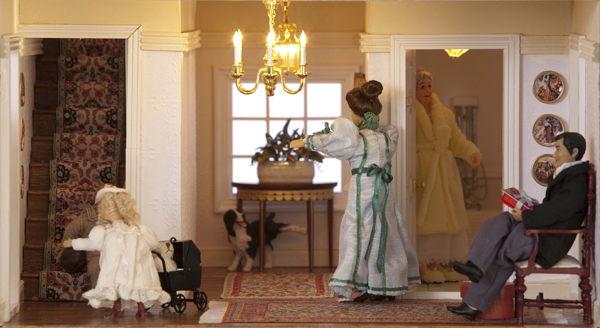 At the base of the stairs sits Phoebe with her pushchair and teddy outside her parents Chloe and Francis' room. They have enjoyed their night at the ball and are being urged by the children's grandfather to get on and take their children back.

Also in the hall, Mr Gervais Bedford watches the chaos and waits patiently for Amy Helpston. A renowned beauty, she sits on the window seat of the Lemon Room pictured below with her dog Maisie considering his proposal.

At the top of the stairs the room is occupied by Maud and George Thistlemere, Chloe's parents.

Jessop the valet steps over Phoebe with her pram and her brother Richard and his football to take the luggage up to the last two rooms. Outside the second room up here is waiter Arthur Sinsel carrying a tray of drinks for the occupants. Margot Dexter retired opera singer is entertaining long-time fan Albert Fielding. 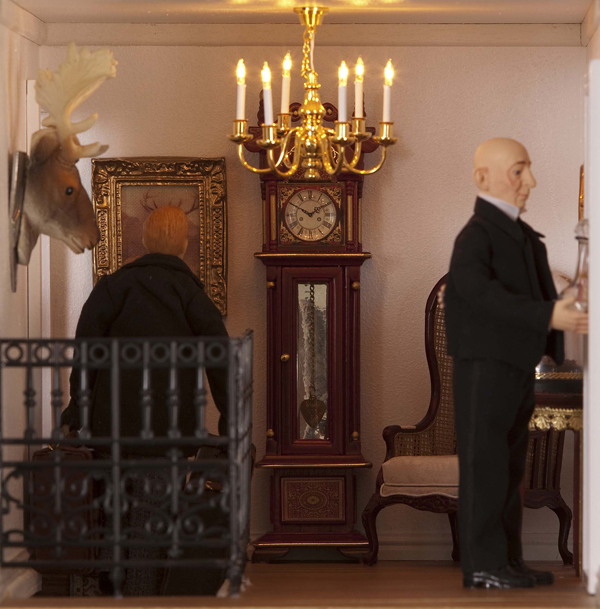 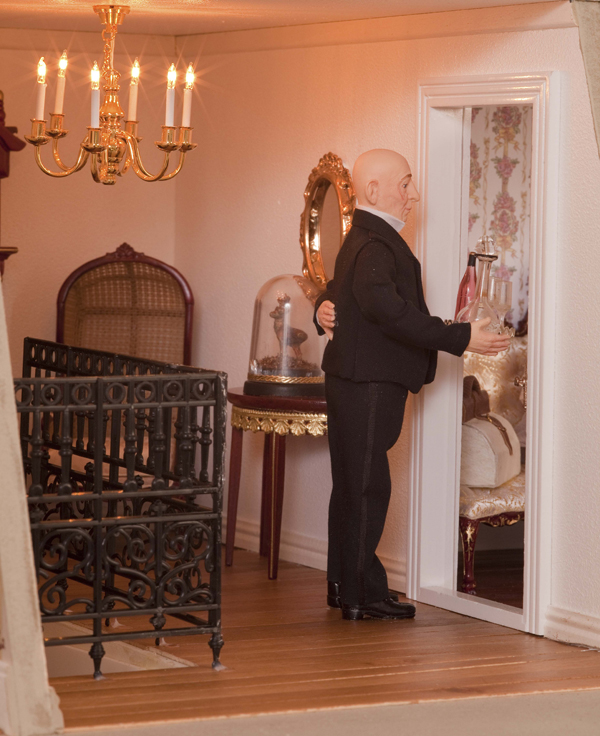 The luggage store has been taken over by a riot of cats and rats. More cats and rats can be found in the basement of the house. Felix the Butler's champion mouser has cornered a rat in the scullery.

In the Butler's pantry, Ronsen senior the butler is supervising Ronsen Junior and Rex the hound is most annoyed that Ginger the cat has pinched his place on the old armchair. 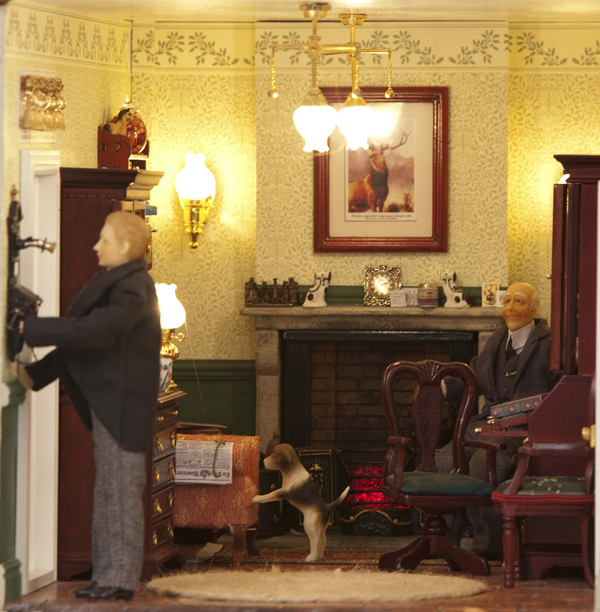 In the kitchen, cook Mavis Gathercole and Chef Dupree discuss preparations for dinner. In the laundry and washroom Katie the scullery maid is washing up while John pumps water into the sink to do the gentlemen’s laundry. 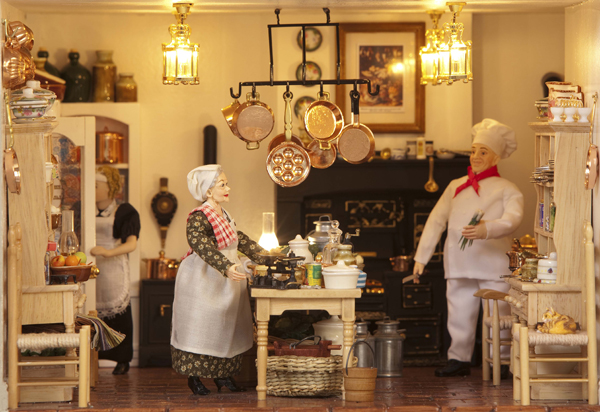 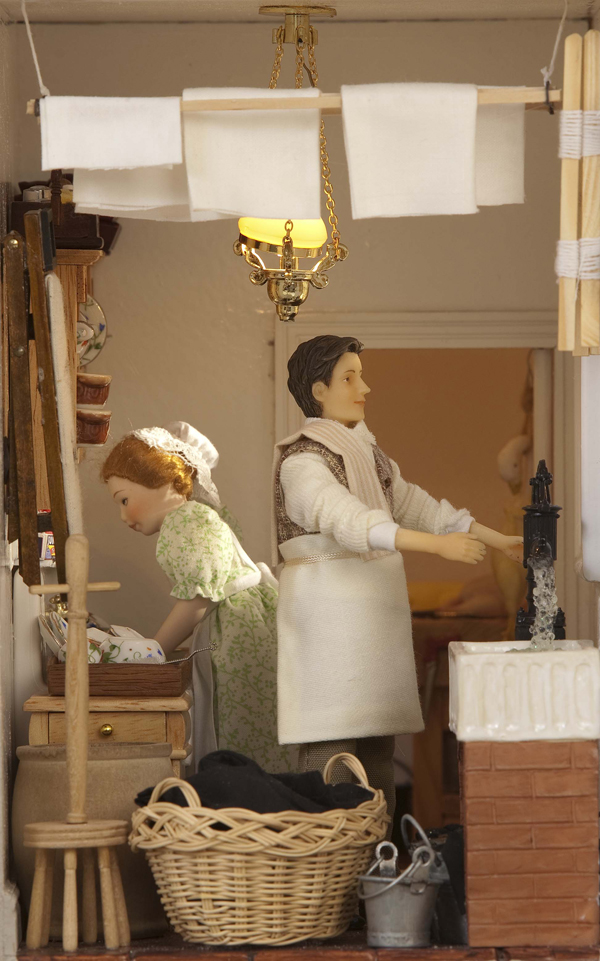 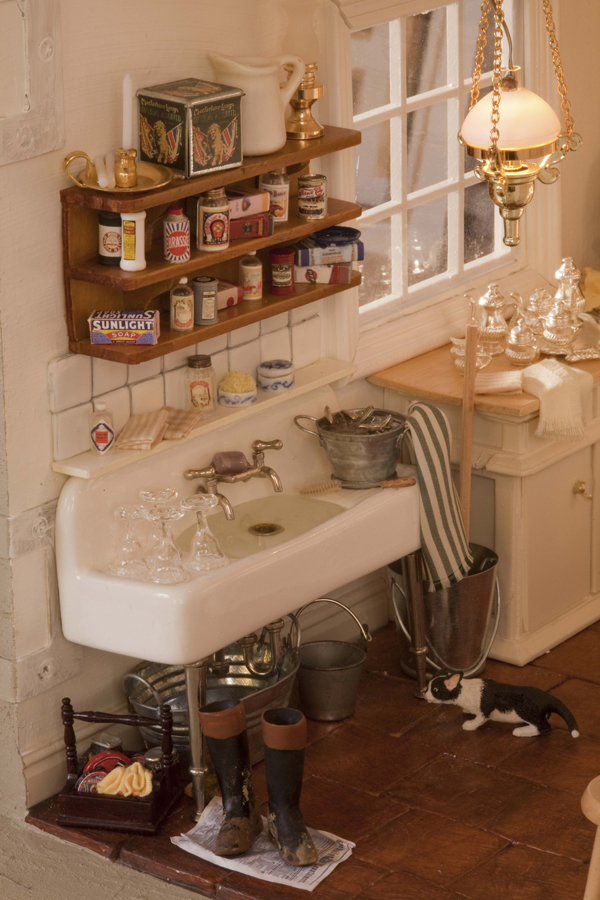 Now you’ve been introduced to the wonderful mansion, see how it was made! Start with part two of the Featherstone Hall Hotel series where the house and theme are chosen, and the flat pack is assembled.

A-Z of miniature crafts: T is for tiling