It's easy to forget about the hall and stairs of a dolls house, but they can offer just as much opportunity to create miniature scenes as a 'proper' room, just as Julie Jackson has achieved in Featherstone Hall Hotel...

The idea to treat the hall and stair areas as another room was inspired in part by Julie’s visit to the Mary Scaife collection. One of her houses had a ghost emerging from a mirror on the top landing with a lady fainting, a pair of small boys running downstairs in fright on the next, and a charwoman sweeping the dust under the carpet in the basement!

Applying the principle to the Featherstone grand hall, Lady Nancy Saville is receiving Sir Michael Fosdyke. He is totally smitten with her and has come to call with a bouquet. Pleased with the flowers she gestures him to sit next to her. At the bottom of the stairs, sour-faced Elsie, the maid, is removing a trolley from the duchesse suite, and a lady ascents to the landing on the floor above.

The grand hall was already part decorated. The ceiling had been painted and the walls papered when Julie was working on the reception below. Julie’s first job was to add pre-stained wooden strip flooring – this was then varnished with a clear gloss topcoat. 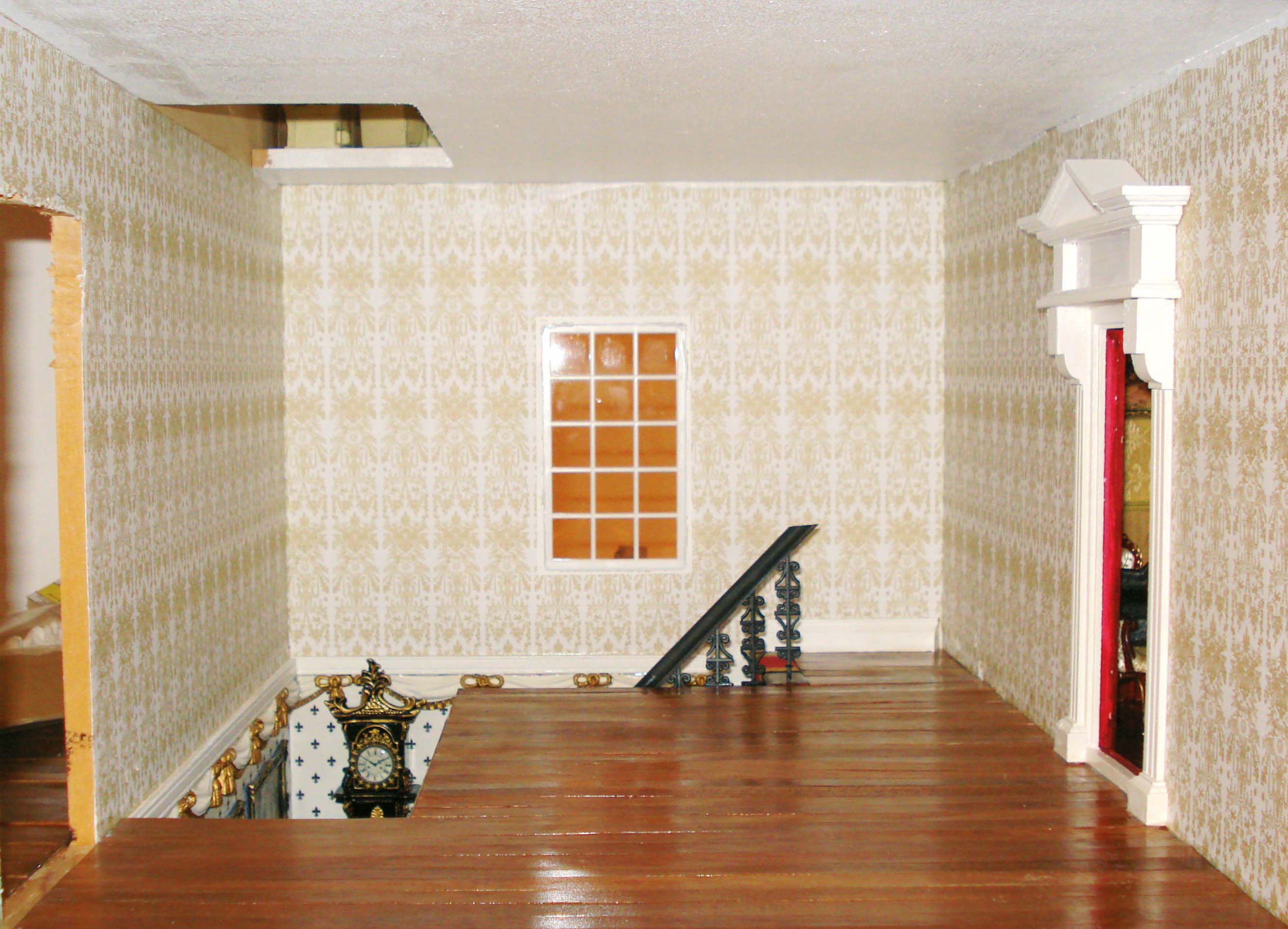 As in the reception below, the ornate door frames were again pairs of exterior doors. These are slightly less ornate than the ones in the main reception rooms on the floor below. In fact, the whole house gets less ornate the higher you go up. The deep plaster-effect frieze was made from a strip of an embossed paper which was topped and tailed with painted wooden moulding.

For the staircase from the grand hall to the landing above, Julie first notched out the top step the width of the skirting board and glued the skirting with a 45-degree angle at each end to the wall side of the staircase after painting it white. 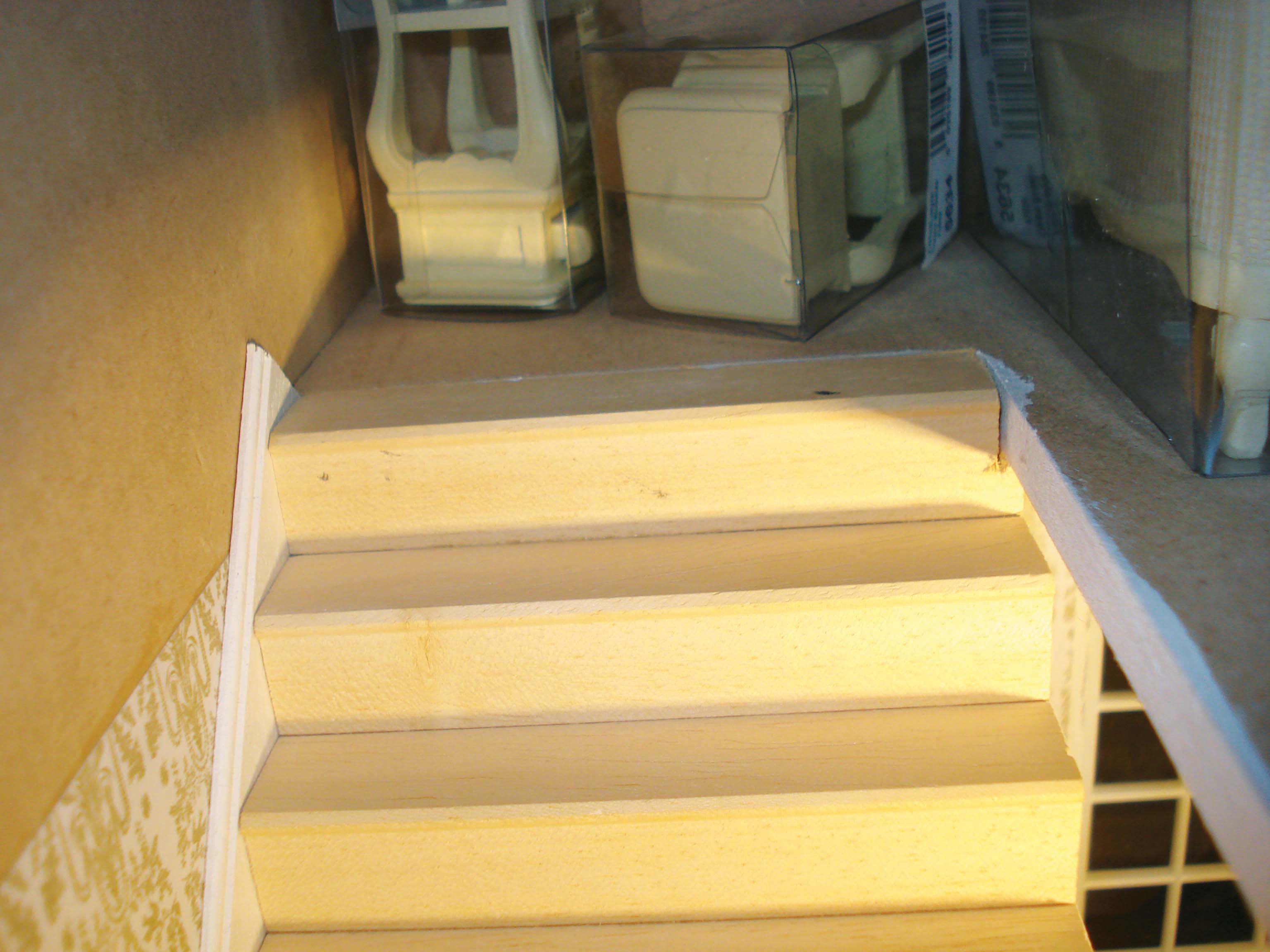 The stair carpet is a strip of silk brocade glued to the centre of the stairs starting at the bottom and working up step by step – using spray glue prevents the silk from fraying and doesn't show through the silk. The carpet was edged with some fine braid to finish. Then the staircase was glued into position.

For the spindles, a series of pony beads with large central holes were glued to the staircase and simply glued into the hole in the bead – much easier than drilling holes into the steps as before. The spindles and handrail are made from cut-down plastic garden railings. These were glued at a 45-degree angle into the groove on the underside of a wooden handrail. The handrail and spindles were painted white with gold highlights and finished off with a peel-off line to look like brass inlay. 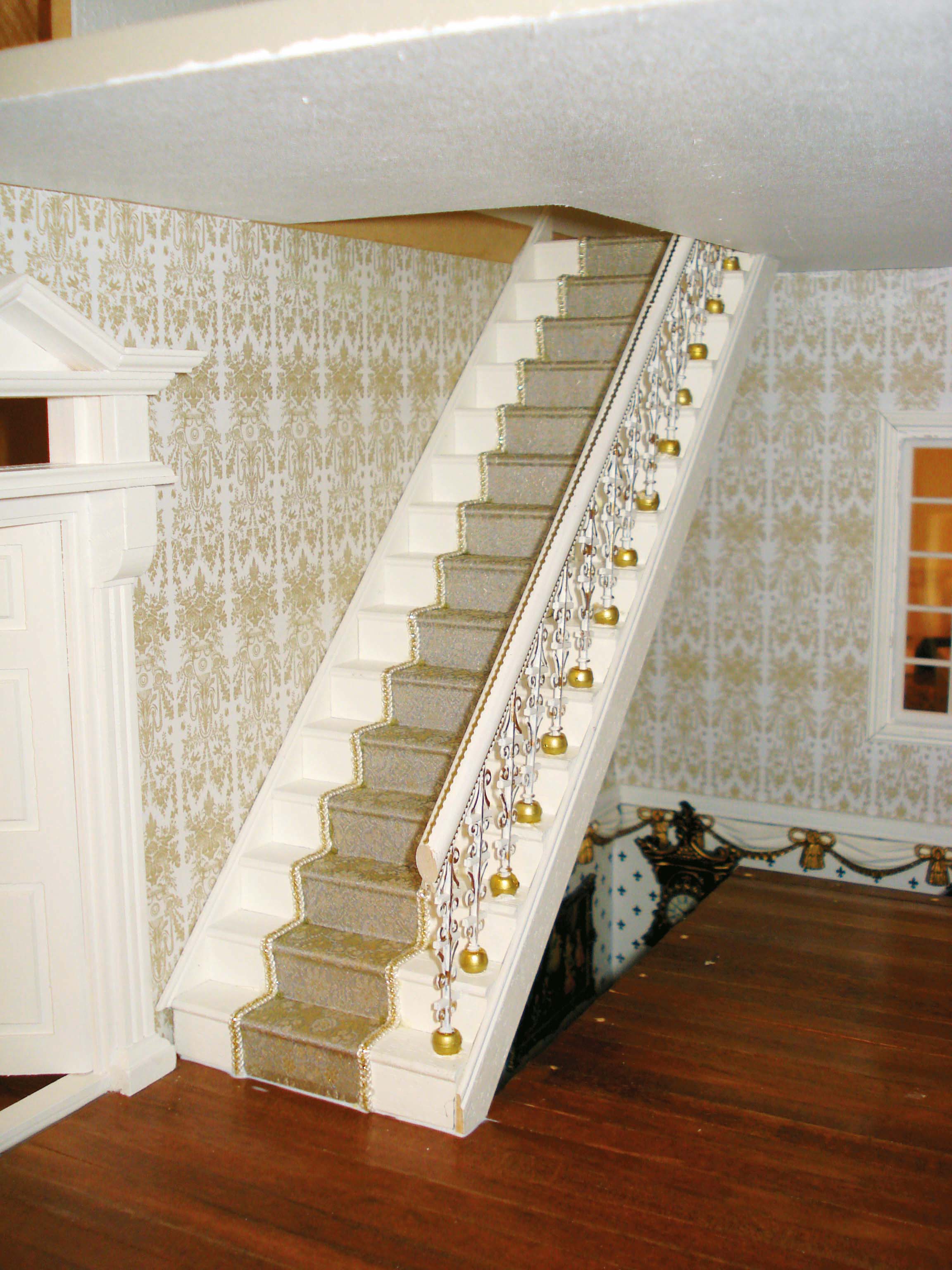 The railing around the stairwell of the grand hall was made with full panels of black plastic garden railings with a matching black handrail to look like a continuation of the rails rising from the reception. To disguise the fact that there are no newel posts, two garden statues holding urns of flowers were added. The stunning carpet was fixed in position with spray glue. 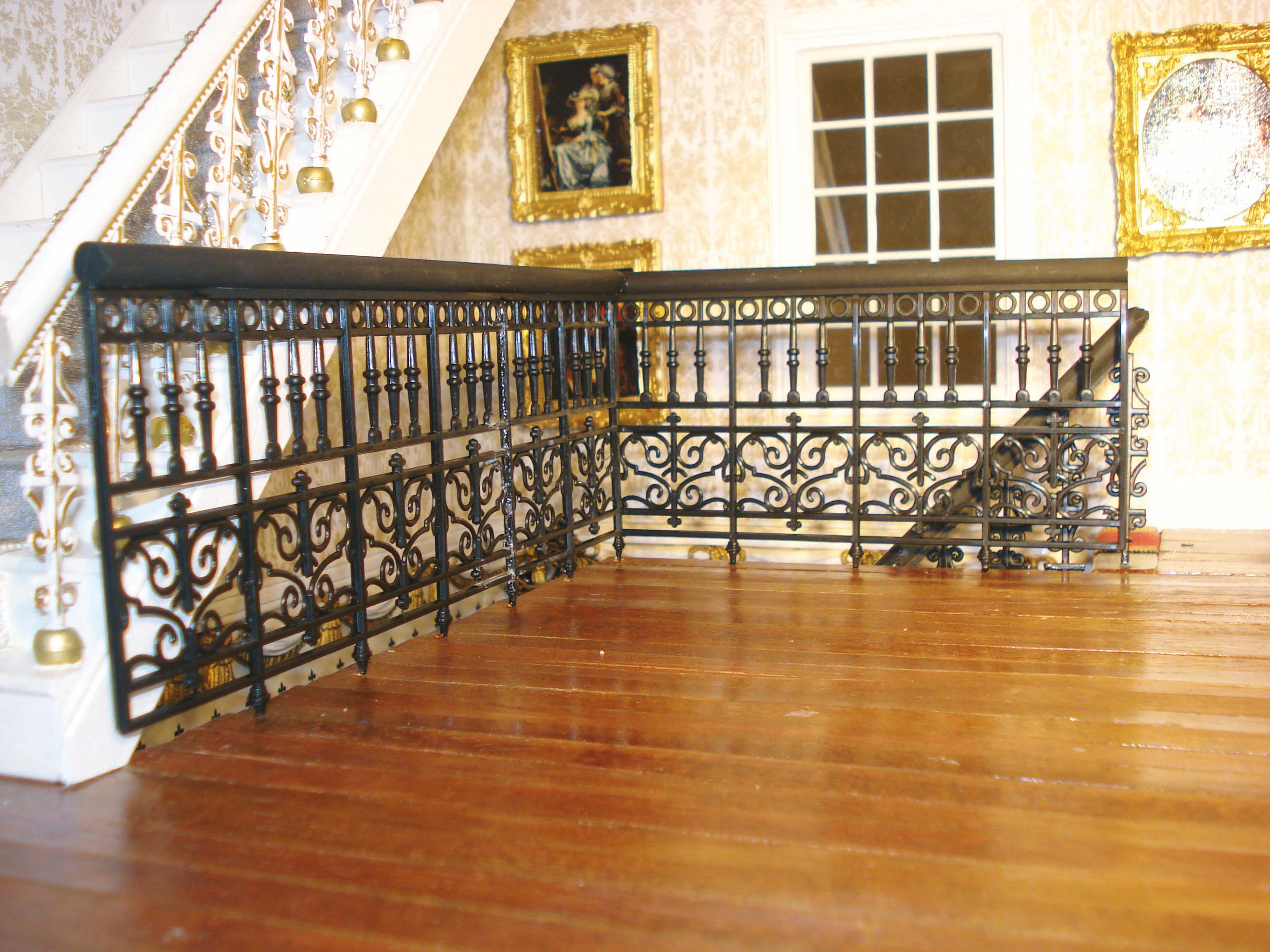 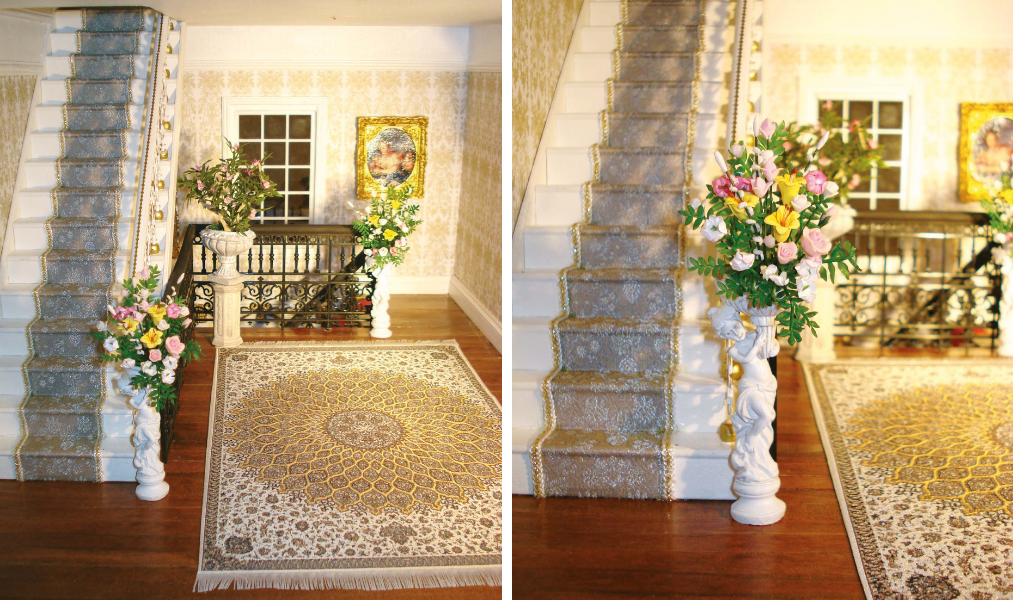 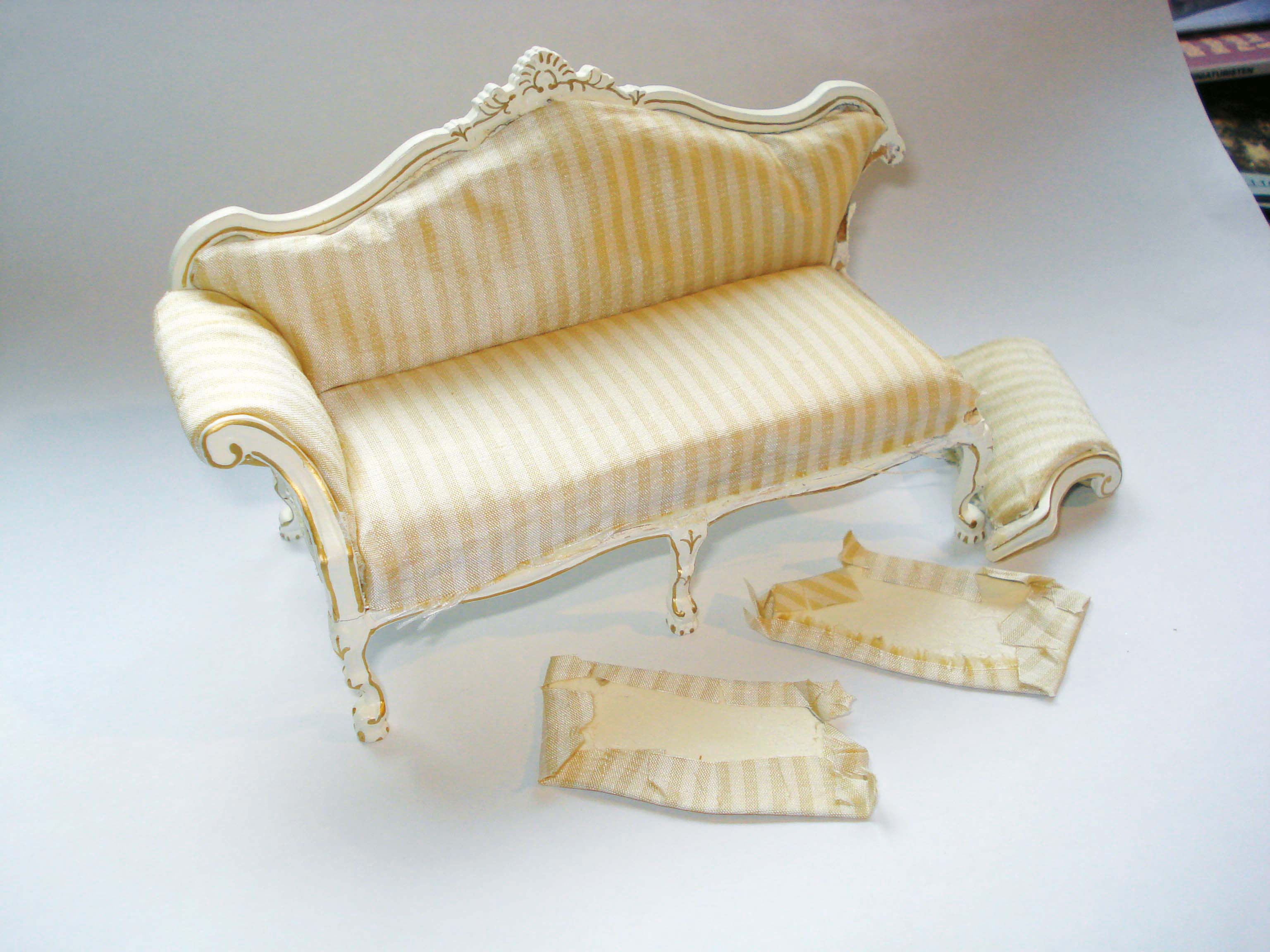 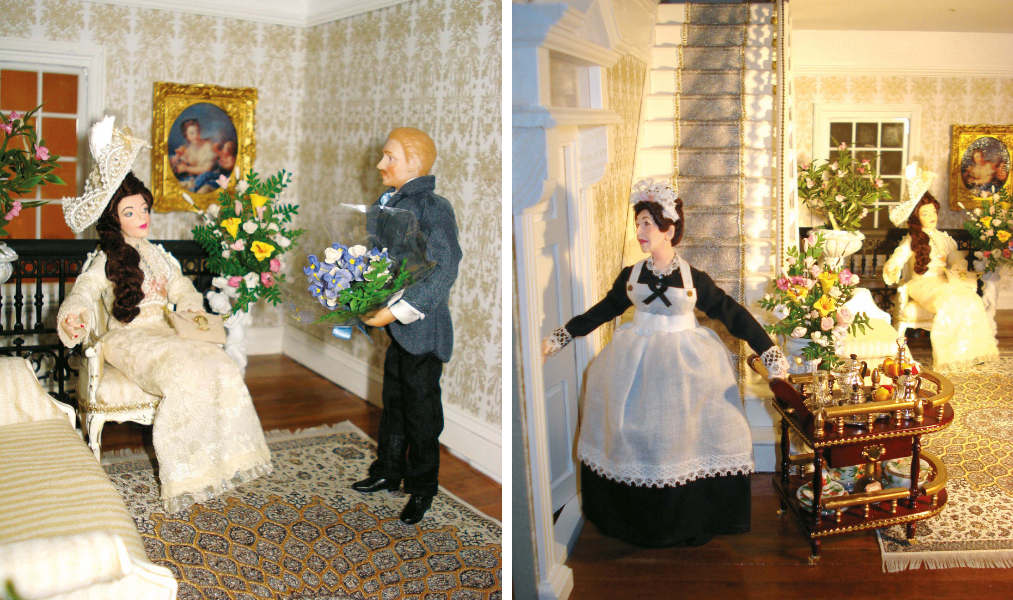 Then when the room was almost finished, Julie remembered the lighting... oops! The whole scene was covered with dust sheets before a hole was drilled in the ceiling for the wires.

Explore more of this fascinating series... Go back to part eight where Julie adds the final touches to the library.  Or move onto part ten of the Featherstone Hall series, where Julie focuses on the duke’s suite.