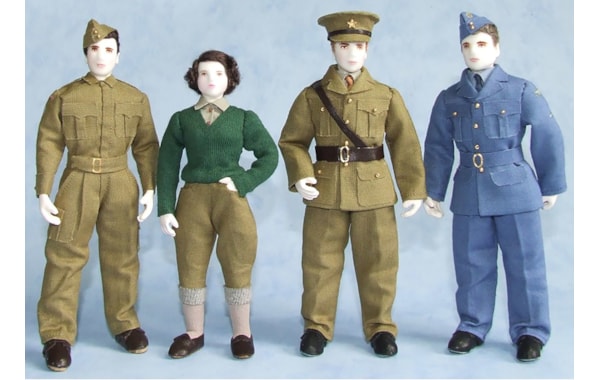 World War Two is an event that will live on in the minds of all eternity. The Second World War ended on the 8th May 1945 and is known as VE Day, or Victory in Europe Day.

Sadie Brown spoke to doll artisan Teresa Thompson about her creative characters commemorating those at the heart of the war effort.

For the many men and women who remember that momentous day, it will seem like merely the blink of an eye as they join the many street parties, commemorative events and celebrations up and down the country during the special bank holiday weekend between the 8th and 10th of May. Miniaturists have always found themselves drawn to our past, whether the favoured era of choice is Medieval, Tudor, Victorian or the 1940s, and Teresa Thompson of Costume Cavalcade is no different.

With a keen eye for authenticity, her work generously spans the centuries in 1/12th scale, opening a vibrant window on history through her skill as an extremely talented doll artisan and a highly accomplished miniature costume designer who prides herself on the wealth of detail which can be provided through the historical accuracy she creates. Her dolls truly reflect the eras which inspired them, with a range of characters offering a glimpse into the occupations and, most importantly, the people who found themselves at the very core of the war effort. 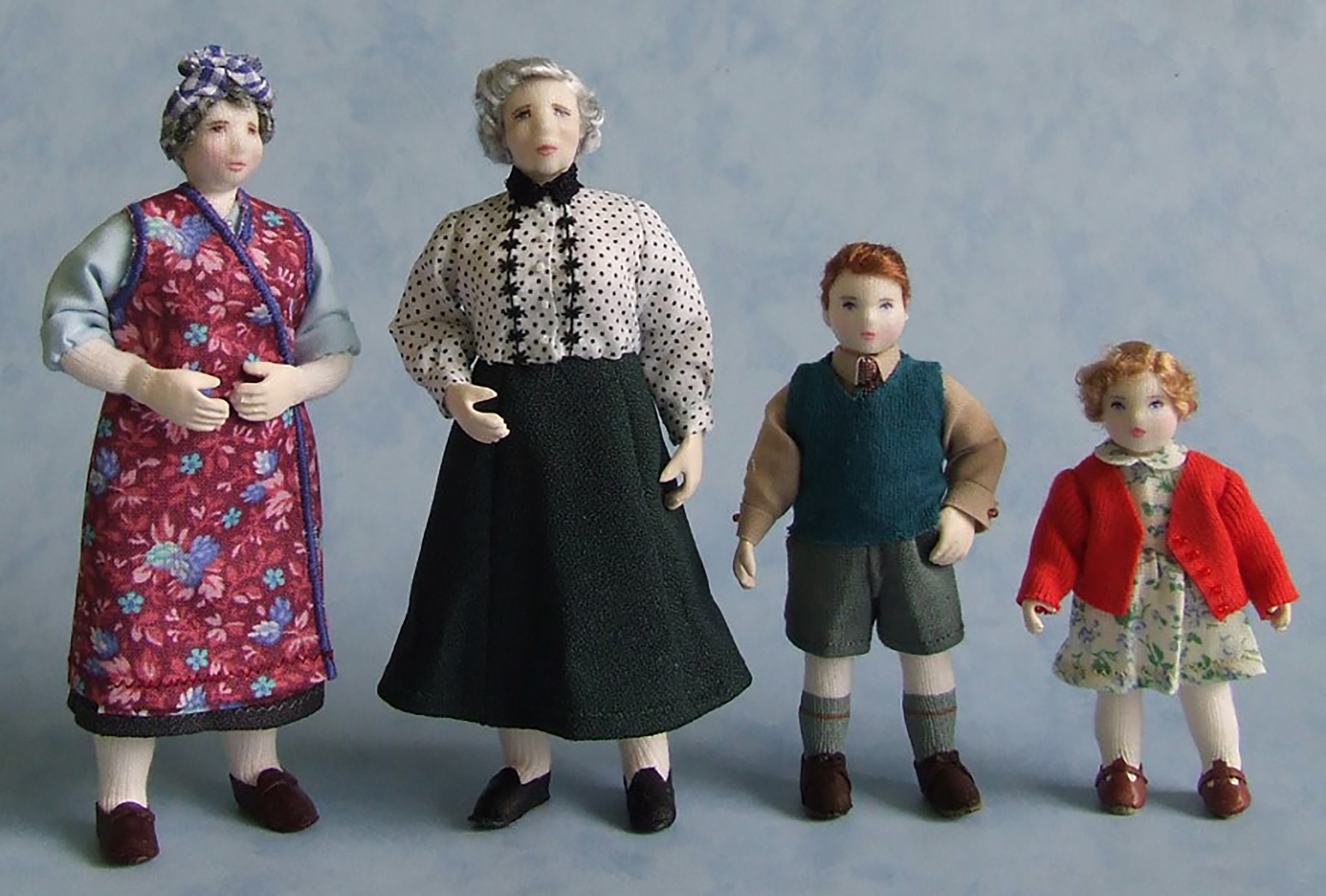 This includes the many important roles in our cities, towns and villages, such as that of the ARP Warden. Teresa’s fantastic Air Raid Warden, complete with his steel helmet, represents the large numbers of men and women who served in this incredibly important position within the beating heart of our communities throughout the Second World War.

Walking the dark streets of Britain during the blackout, they ensured the bright lights of home we now take for granted were carefully shielded from any approaching enemy by blackout curtains but undertook many other tasks in addition to this. These ranged from the more standard elements such as checking gas masks and ensuring people made it safely to air raid shelters, but as they could also become involved in firefighting and search and rescue in the aftermath of a raid, this wasn’t a role which came without risks.

The duties of an ARP Warden could also be found to include the more unusual, such as one instance when a warden was asked to aid the search for someone who had apparently parachuted in. The warden in question was late actress and writer Barbara Nixon, who tells the story in her book, Raiders Overhead: A Diary of the London Blitz, first published in 1943. One in six ARP Wardens were women and Nixon, who initially began in a part-time role, was among the first women to take up a position as a full-time warden.

Women called up to work

From 1941, women were called up to begin work in many jobs which had previously been considered a male domain. These jobs, which included everything from shipbuilding to engineering were all vital to the War Effort and without these hardworking women things would have looked very different. Even Queen Elizabeth II, the then Princess Elizabeth trained in the Women’s Auxiliary Territorial Service as a mechanic and military truck driver. Significantly, to this day our reigning monarch remains the only female member of the royal family who has served in the military. 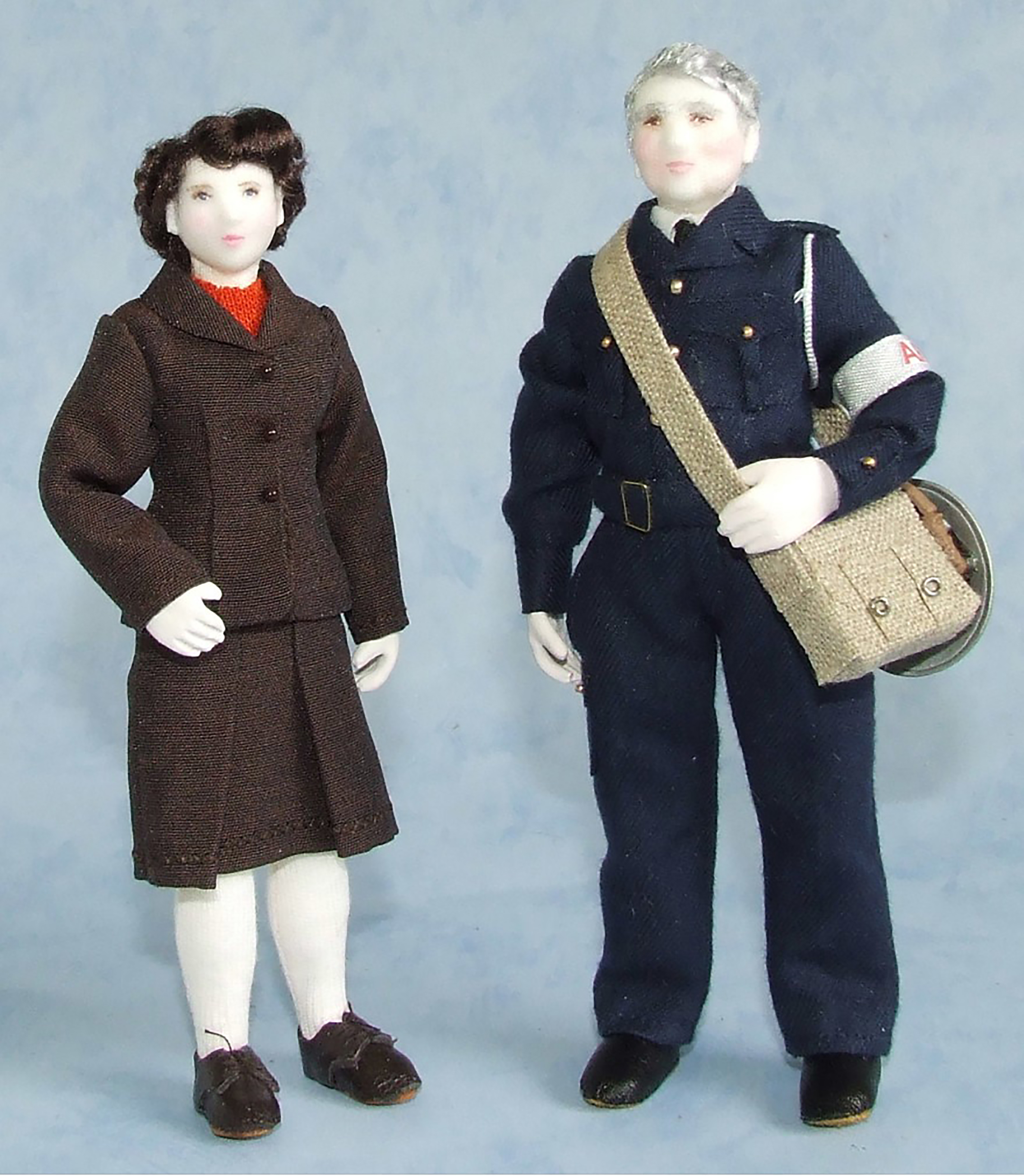 Glenda and an Air Raid Warden

A growing army - the vital role of the Women's Land Army

Teresa Thompson shows us some of the vital roles women played in the War through several of her dolls, including Beryl, a formidable Land Army girl, who is seen photographed alongside Eric, a soldier, Nicholas, an Army Officer, and Douglas, an airman, their costumes all beautifully crafted.

The iconic Land Girls are also brought to life in 1/12th scale with Iris, dressed in dungarees and a headscarf as she joins the ranks of many thousands from rural and urban backgrounds alike who showed their strength after either volunteering or being conscripted to become part of the Women’s Land Army. They worked hard ensuring our farming and agriculture industries continued to thrive and vitally to make certain that Britain produced enough home grown food to replace the sheer volume that had been imported prior to the outbreak of war.

It wasn’t all harvesting crops and traditional farm work however, with Land Girls also working in other areas such as The Women’s Timber Corps, where they were known as ‘Lumber Jills’! 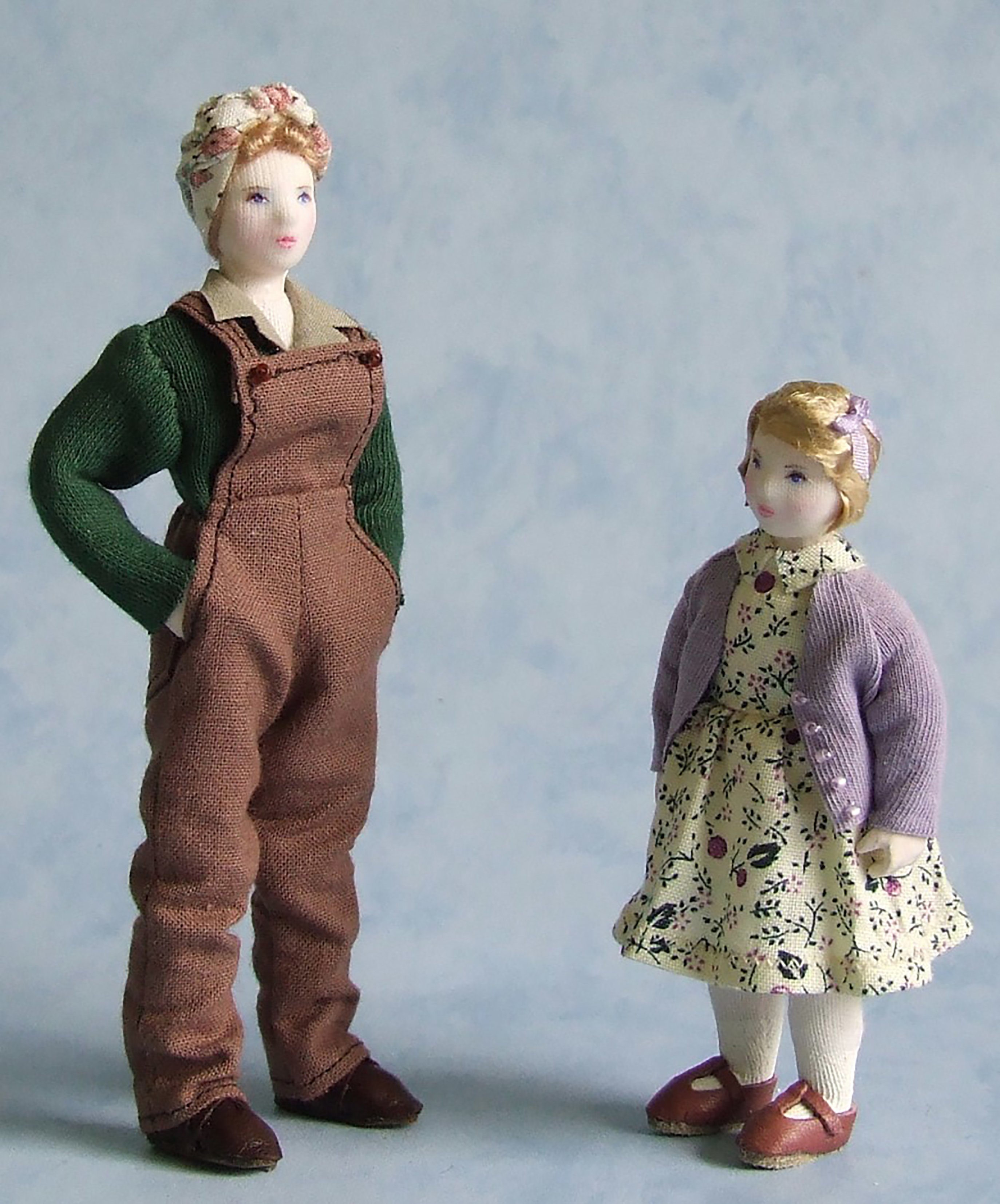 Teresa also shows us there was still room for romance during World War Two, even if sometimes it could only be fleeting. Marrying Army Officer, Nicholas, Muriel’s 1940s wedding dress perfectly captures the essence of a time when many beautiful dresses were lovingly crafted using parachute silk, creating stunning garments. In addition, these could often be parachutes which had helped their fiancées to safety and so proved all the more special to the happy couple, in addition to having their own historical significance. 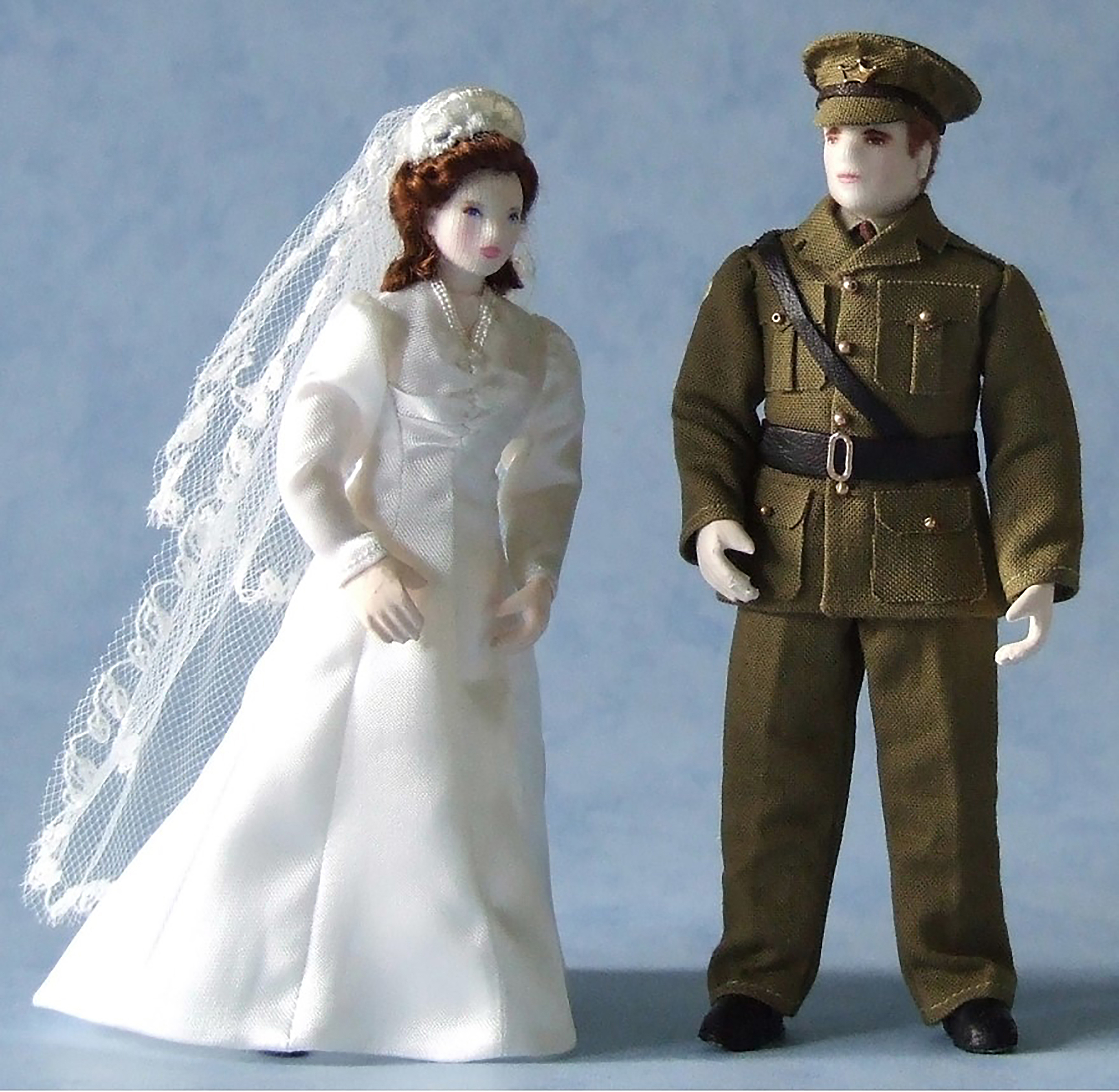 As is embodied throughout Teresa’s work, recreating elements from a specific era in history is something which fascinates miniature artisans, and the selection of wartime themed miniatures available are as diverse as they are exciting. Jane Harrop’s wartime first aid kit proves to be no exception. Filled with everything the ardent first aider of the day could have needed, it immediately brings that sense of realism to any World War Two scene.

Keith Bougourd, hugely admired as one of our most exceptional miniature clock makers, has created something incredibly special and a piece which is possibly unique in small scale, with his working RAF Sector Clock. The Sector Clock was initially introduced during World War One, coming into its own during the Battle of Britain as it helped operations rooms to track aircraft, and to quite literally help plot the course of victory.

That victory finally arrived in Europe on May the 8th 1945, with huge numbers of people pouring on to the streets, including the then Princess Elizabeth and her younger sister, Princess Margaret, who had been given permission to join the celebrations amongst the crowds.

Teresa’s dolls also reflect the people who would have been part of those huge crowds on that momentous day. These wonderfully constructed characters include Freda, the busy housewife wearing her apron and headscarf, who will have fought to feed and clothe her family when faced with the realities of rationing, and Norman in his flat cap who, along with young Pamela and Brian, find themselves lucky enough to meet someone very important from Teresa’s portfolio. Her Chelsea Pensioner stands resplendent in the scarlet coat and shako cap we all know so well, wearing his miniature medals with pride and it seems fitting that he is the final character we meet on our journey. 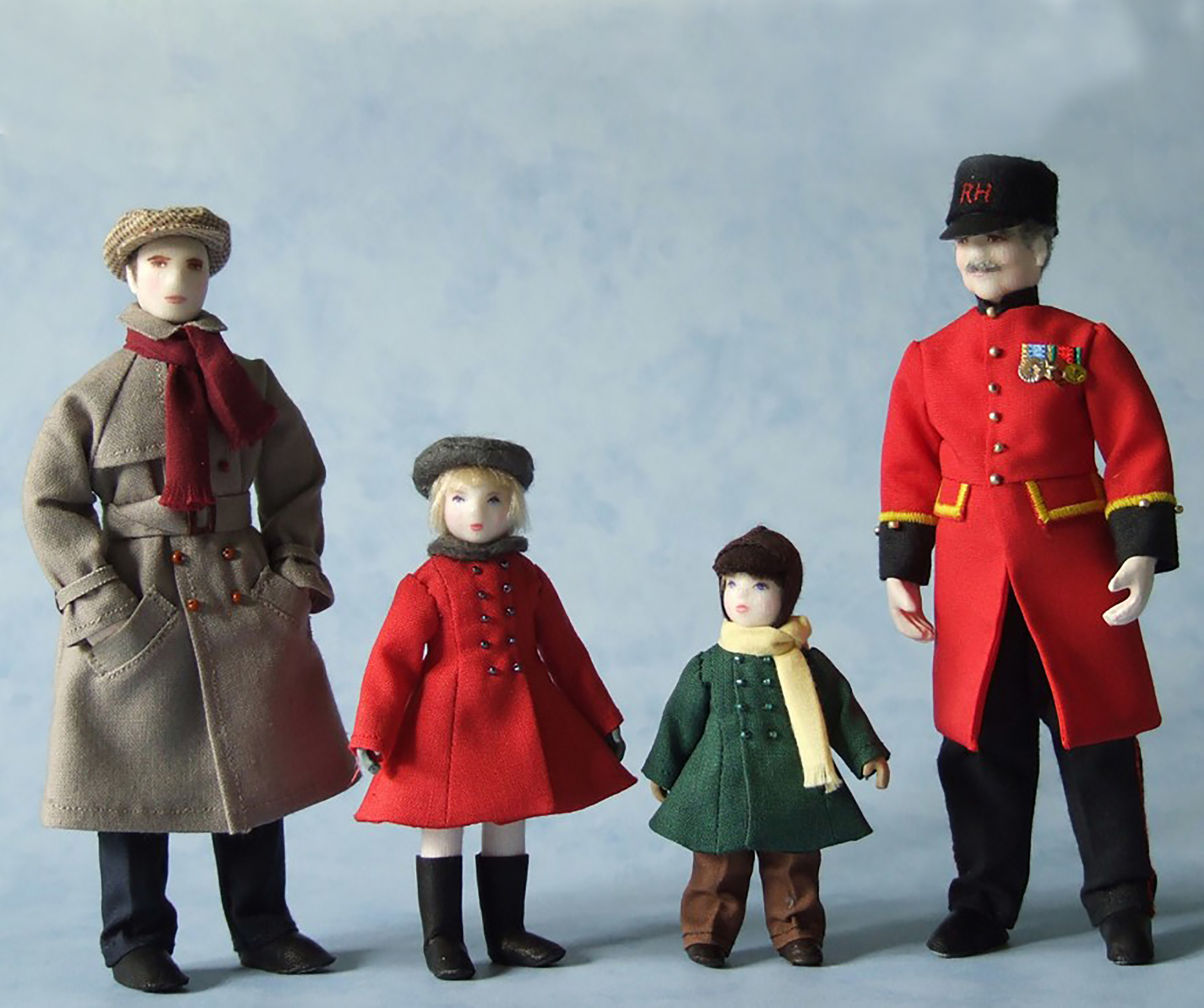 Pamela and Brian will also no doubt represent more than a few readers out there who have their own memories and recollections of VE Day as we remember that day in May 1945. Celebrating the years of brand new dawns we’ve enjoyed, all thanks to the efforts and sacrifices made by those for whom days of war were etched into the history books as a very real part of their own daily lives.

For a World War Two inspired project, take a look at our tutorial on miniature wartime sweets. And be sure to check out the rest of the DHMS blog for more fascinating articles, projects, inspiration and much more!

How to make a miniature intarsia cottage cushion

How to create a miniature dog kennel in polymer clay