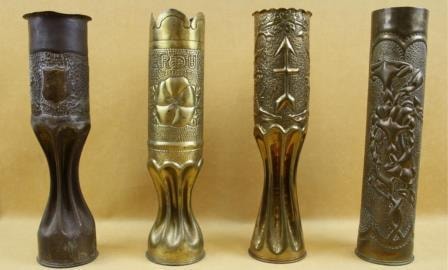 In the first part of this WW1 miniatures series, learn about trench art and make your own miniature trench art vases for your dolls house or miniature scene!

What is trench art?

'Trench art' is a broad term loosely meaning any item made by soldiers, prisoners of war, or civilians where its manufacture is directly linked to armed conflict and wars. Trench art goes back to the Napoleonic Wars and continues to the present day.

Evidence from WW1 shows that shell and bullet casings, usually brass, were a popular material that soldiers used to create trench art. These particular items can contain a lot of information, like the date of manufacture, the size of the bomb, and the country of origin or the military arrow sign in the case of British ammunition. Anything that a soldier might have had access to in the trenches could be used to create objects – carved wood, straw feathers, bones and coins.

Typical items that have been found are:

...along with sweetheart tokens for the loved ones back home like brooches made from coins and hand carved boxes and ornaments from wood and bone. Examples of trench art can be seen in the image below... 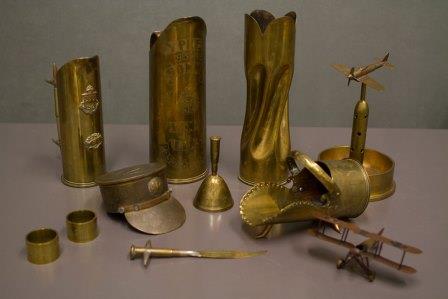 Category two – trench art made by prisoners of war and internees

Love exploring history in miniature form? Dolls House and Miniature Scene magazine is packed with projects to inspire from a wide range of eras – there's something for all tastes and interests!

How to make a pair of miniature trench art vases

The metal tops of two makeup pencils, preferably in brass, are the perfect item to replicate the look of WW1 shell cases in miniature. Cheap makeup stalls, markets, £1 shops, or car boot sales are ideal places to find these metal tops.

1. The main body of the vase is made from the pencil lid. It may be slightly domed on top and will need flattening to stand upright. if they fall over and don't stand upright, put the top onto a pencil and hammer lightly until the end is flattened and it can stand unaided. If they're already perfectly flat, then ignore this step. 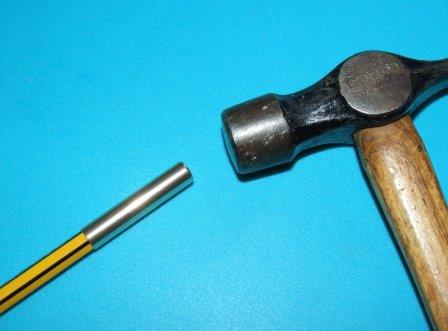 2. To create a base for the vase fix a circle to the base. This can be card, a sequin, or suitably sized metal discs. Glue a circle to each base with two-part epoxy glue and leave to set. 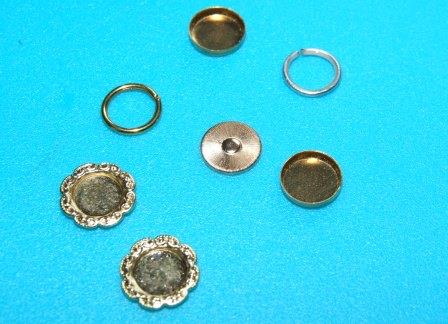 3. With bottle-nosed pliers (smooth ones, not ribbed) gently bend out the top of each vase-like petals. Start with one side, and then repeat on the opposite. Then do two more crimps in between the first two, followed by four more between these four. You should be able to manage about eight around the top of each vase, which will create a crimped edge. 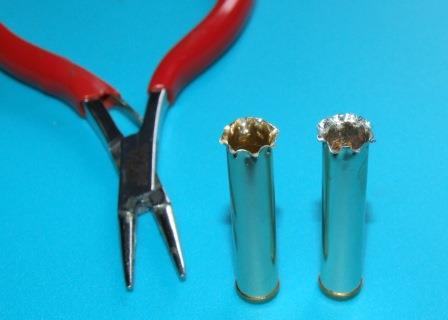 4. Take a fine tipped marker pen and draw out the design on each shell case vase. A sinuous Art Nouveau floral design works well, or the name of a battle, e.g. Somme. Other ideas could be like these real ones below of an early plane or memorial cross. 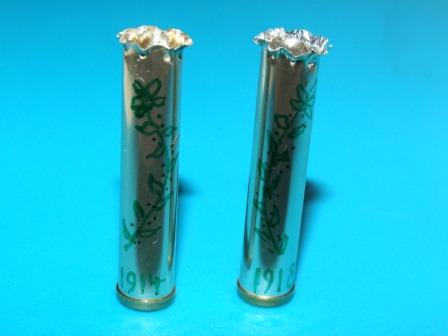 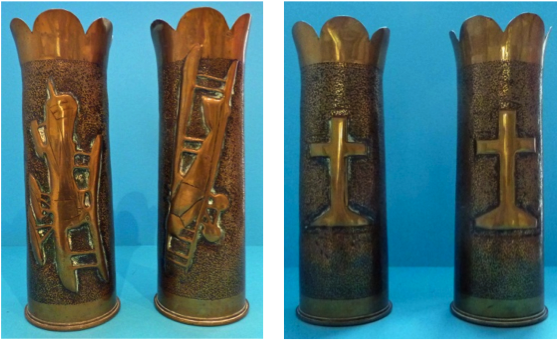 5. With your fine tip applicator bottle filled with PVA go over the design creating a raised pattern. This is rather like tube-lining, but with glue. Leave this to dry thoroughly until the glue has turned from white to clear. It can be neatened up a bit with a toothpick whilst the glue is still wet. It looks a bit blobby right now but will improve once dry, painted and given the finishing touches. 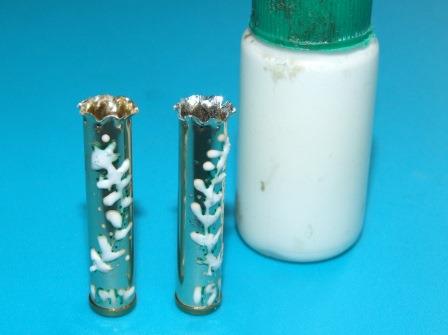 6. Once the glue is completely dry and hard, rub gold paint over the design with your finger so it adheres to the dry glue, this will emphasise the design.

The vases can be given a coat of matt acrylic varnish to protect this finish – this part is optional. Stand the trench art vases either side of the dolls house mantelpiece as a souvenir of the war. 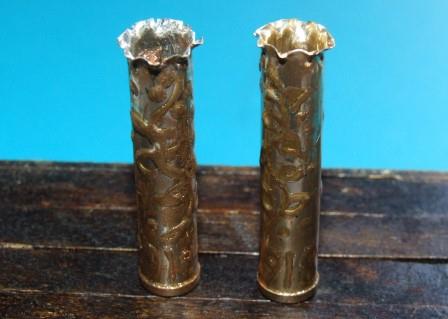